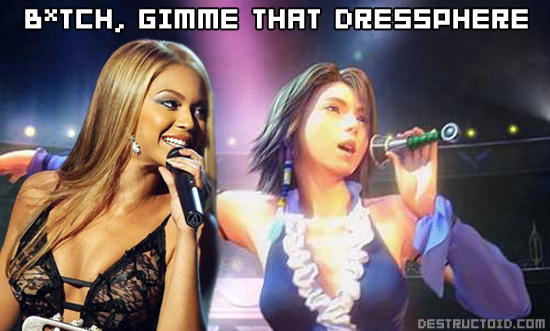 Remember the whole Y2K doomsday scare, when your neighbor spent his entire nest egg building that bomb shelter in his basement, stocked with a 10-year supply of Spaghetti-Os and Urnge Drank? Yeah, you might want to go knock on his door about now, because that whole apocalypse thing might be right around the corner. Either that, or we’ve all entered the Twilight Zone. Submitted for your approval:

Let’s see, it’s not Friday, April Fool’s was months ago, so that can only mean this is … real? Apparently it’s a DDR-style rhythm game, in which players match button presses with arrows displayed on the screen while Beyonce and her pals cheer them on. Songs featured in the game include such timeless masterpieces as Bug A Boo, Say My Name, and the always classic Survivor. Check out the press release after the jump. Until then, someone hold me, I’m scared.

[Big ups to Bfeld13 for this little nugget of horror]