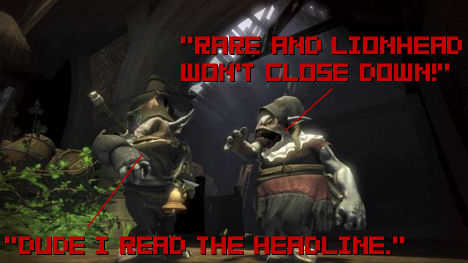 Since Microsoft decided to shut down Ensemble Studios a few weeks ago, you might be wondering whether The ‘Soft has an eye towards putting the kibosh on any other studios.

According to Microsoft Game Studios boss Phil Spencer, MS’ two biggest studios in Rare and Lionhead are safe. At least for the time being. Claiming that they are very important to the company, the outspoken Spencer had nothing but good things to say for the British developers.

“[The] productivity and effort in those two studios is just great to see, and the number of studio resources we have in the UK — this is our largest concentration of studio resources anywhere on the planet. The studios, and the franchises, remain a very important part of our success.

[The] next Lionhead game is definitely an MGS game. And Peter’s right — it’s very different than games that Lionhead or many others have built before … For Rare, [Banjo-Kazooie: Nuts & Bolts] will be their fifth game in the first three years of the Xbox 360 — that’s crazy. Two launch games? What studio on the planet signs up for two launch games? That’s just crazy.”