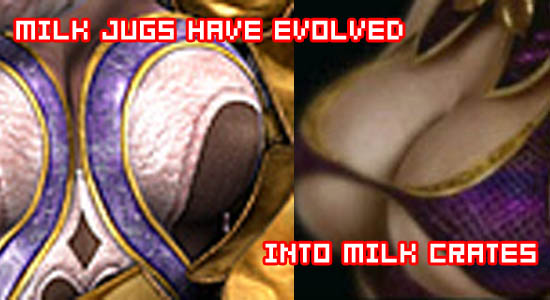 I confess, fighting games aren’t really my specialty. I’m only passably good at them — that’s to say, better than many people, but I eat dirt against practiced gamers. I do play a lot of Soul Calibur, though. My hands get automatic and I zone out — just like during those awkward afternoons in high school. And I’m sure this is because I play too many hentai games, but add to that the combo of scantily-clad, passionate fighters and a loose clapboard storyline as an excuse for action, and before you know it, my mind’s wandering. I’m filling in the blanks with sexual tension and my own little imaginary storylines — which are usually campy and obscene.

The new trickle of graphics for Soul Calibur IV don’t help any, either. Looks like Ivy’s returned to the tournament this year with an evolved set of milkjugs. You can’t even call them milkjugs anymore; those are crates.

Like, come on, though — can’t you totally imagine that Mitsurugi’s beatdown of Xianghua, for example, is just a didactic preface to the respect-instructive, disciplinarian sex he plans to have with her once he wins? She wails, as is her way; “no use,” he replies sternly. And when a gal like Ivy (I also visualize that Ivy’s packin’ a “secret”) gets a pansy like Raphael on his knees in the library with that “Demon’s Tail”, and orders, “squirm!” … I mean, come on, seriously. It doesn’t take a sophisticated imagination to fill in a little postscript for the battle.

Fifteen-year-old Talim seems so pitifully earnest, doesn’t she? Like, she really thinks she’s there for the fighting. Meanwhile, Sophitia and Nightmare snicker behind their hands. She’ll learn, heh heh heh.

Siegfried nodded slowly, understanding what she was saying. This girl must have been in a position of servitude for a very long time. She doesn’t know how to live her own life; the only way she can be function is if someone else is making her decisions for her. She believes we have strong similarities, and…thinks that this makes me fit to be her new ‘master’…

“…No! I don’t reject you. It’s just that…this is very…sudden. I’m not sure what to think.”

“Well, I don’t know how you could be hesitant. Who would object to having a faithful and loyal slave that will do whatever you want? There must be SOME way that I can be useful to you! Right, Master? Right?”

As Tira spoke, she gestured with her arms, and took a few steps toward Siegfried. Her movements made her breasts bounce and sway, and once she came closer, Siegfried could see the outline of her nipples against the shredded cloth that barely covered her breasts. Although he felt guilty for it, no matter how hard Siegfried tried, he found himself utterly unable to tear his gaze away from Tira’s perfectly shaped body.

Also, in my mind Cervantes totally runs a party boat on his ghost pirate ship; coolers of Corona, tissue-paper parrot decorations, limbo line– the whole nine yards. “Come with me to hell!” Cervantes whoops, as he mixes margaritas in the blender. “When you think of cerveza, think of Cervantes!” They could use Kilik’s bo staff to limbo under; it’d totally work. I bet it’d be a hell of a party, notwithstanding any awkward social situations caused by Voldo, or clumsy beer spillage by lumbering Astaroth. I wish I could be invited — then I’d have real friends, and I wouldn’t have to invent imaginary Soul Calibur parties.

Filed under... #Soulcalibur#Things gamers do