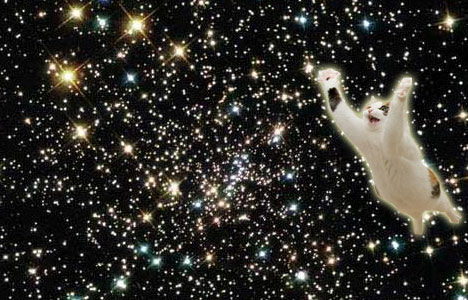 Well, look who I found fishing through Destructoid’s trash bin: it’s our old friend, Spacecat! Last time, he scooped the world on the news that Mega Man 9 was in the works. Now, he has returned from his intergalactic time travels with one doozy of a news story.

Millions of gamers are eagerly anticipating the November release of Epic’s Gears of War 2 for the Xbox 360. Cliffy–er, Cliff Bleszinski–promises that this second title in the trilogy will be bigger, badder, and bloodier than the original, and we’re inclined to agree. That’s not just because of the bonus disc, DLC, or lack of family-friendly content. No, my friends — we’ve got something much more concrete, thanks to Spacecat. But he says it better than I can:

Thanks to a fellow feline friend who’d like to remain anonymous, I’ve got a list of all fifty Achievements in Gears of War 2. Man, that “Seriously 2.0” Achievement sure sounds difficult — but what do I care? I can just go forward in time to a point when I’ve already unlocked it. Life as Spacecat is pretty good, eh? Then again, all this time travel leaves very little time for eats. Hence, the garbage sifting. Anyway, back to the Achievements. My personal favorite to work towards is “Variety is the Spice of Death.” That way, I get to put my paws on all the weapons. Uh-oh…I have to go! I think they see me…

Hit the jump for the full list, but BE WARNED: there be SPOILERS in them thar Achievement hills. “Variety is the Spice of Death” does look like it’ll be fun to unlock, doesn’t it?

[Update: We were contacted by Microsoft, who politely asked that we take down the Achievements because the list we have is apparently not the finalized version; a few changes will be made. We expect to have an update on the list within the next 24 hours. But fear not! Spacecat lives on, traversing the five dimensions, and we stipulated that he not be forced to give up his kitty contact.]