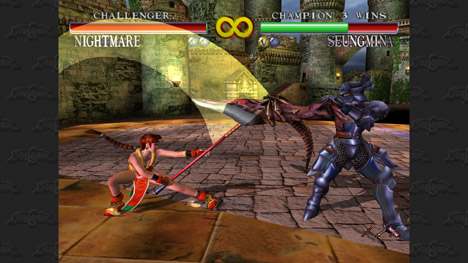 When I think of Soulcalibur, two things always come to my mind: the first being “transcending history and the world, a tale of swords and souls eternally retold,” and the second being “best fighting game ever.”

I’m sure there are quite a few of you who think otherwise, but you have to admit, Soulcalibur is still a damn fine game. But is it worth spending 800 Microsoft Points just so you can play it again on your Xbox 360?

Sure, the Xbox LIVE Arcade version is in HD, but there are a few drawbacks to the remake as well. Multiplayer is offline only, the game is still presented in 4:3, and finally, Mission Mode has been removed (the Art Gallery is still available though).

Also hitting XBLA on Wednesday is a 280-question expansion pack for Wits & Wagers that will run you 320 Microsoft Points.