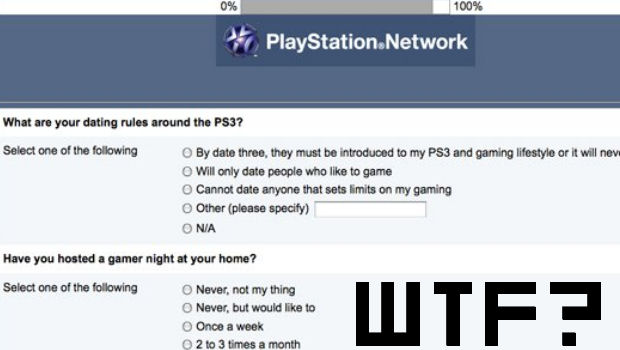 In news so bizarre it just couldn’t have been falsified, a new PS3 survey is asking some very personal questions indeed. Sony wants to know about your dating habits, and how they are affected by the PlayStation 3. I don’t even know where to begin with this.

The survey asks “What are your dating rules around the PS3?” as if the black box o’ Blu-ray somehow dictates who you can have sex with (although I’m guessing a number of N4G users will ask their PlayStations for permission first). The provided answers (seen above) are hilarious.

Sony also wants to know if you’ve canceled a date or missed a party because you were too busy gaming. Even better, an entire section asks you to choose between videogames and various important aspects of life — choosing between games and your career, your TV (how would you play!?) and even your family! Yes, Sony wants to know if videogames are more important to you than your family.

This is pretty much the most entertaining thing Sony has ever done. Just release this survey as a PS3 game and it’ll win the console wars!

Bizarre PS3 survey asks about your love life – what the hell is Sony working on? [GamesRadar]