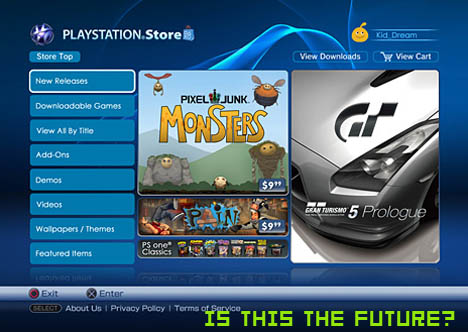 Those crazy Sony people. First they tell us that Blu-ray is the wave of the future, and now they say that digital downloads are. Make up your mind!

At a developer conference in London, SCEE president David Reeves said that the future is the PlayStation Network. He points out that internal figures that show over 40 per cent of PS3 owners download games direct to their machines.

The key to the future is the PlayStation Network, Games put straight onto PSN are the big opportunity.

We do believe that the disc-based delivery system will fall as the power of the network base rises. At the same time, the overall industry growth will continue to go upwards as we push out into emerging markets.

What we don’t see is an overall decline in the market. This is a golden era of video games.

So which is it, Sony?

HEXUS.gaming points out that current games may never work as downloads. Think about Metal Gear Solid 4. Could you imagine trying to download that game?

I think there’s room for both. Even though they are “proofing itself against the disaster the music industry has found itself in,” games are still selling on discs. I’d say keep the downloads for smaller games, and push the disc for big titles.

Do you agree with Sony’s belief in a downloadable future?