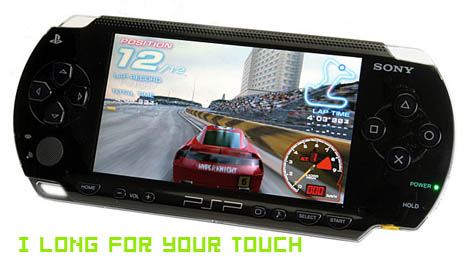 We’d almost have to jump to conclusions to make this story about a touch screen patent work on a videogame Web site.

Invented by Sony boss Phil Harrison himself, this patent for a handheld “device with touchscreen and digital tactile pixels” was granted on Friday. I only understood about 30% of the application, but the text does say that the “device may be configured for use as a game device, a phone, a portable media player, an email device, web browser device and the like.”

As for the “digital tactile pixels,” if I’m understanding it correctly, this device will give some kind of touch feedback. In other words, you’ll be able to feel where you’re pointing. The patent application says:

The state of the tactile pixels may thereby be made to respond to what is being represented by images displayed on the touch screen (e.g., game events, in the case of a hand-held game device).

This may not be enough to just jump right out there and say PSP 2, but we have to make a game article out of this somehow. Right?

I would crap my pants in disgust if the next PSP had a touch screen. What about you? Care to jump to conclusions with me?