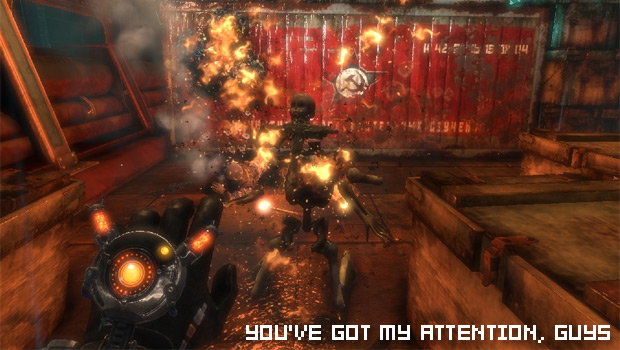 In all honesty, I have paid zero attention to Raven Software’s first-person shooter with a twist, Singularity, before today. But that all changed when Activision sent over two new trailers for the sci-fi game that uses time as a weapon, earlier this afternoon.

No, you don’t go around brutally throwing clocks at people, as fun as that sounds. Instead, you use this little gadget on your hand called the Time Manipulation Device to age objects and yes, even bad guys.

It’s a completely shallow reason for suddenly becoming interested in Singularity, I know, but gimmicks are known to grab my attention from time to time. Check after the break for two trailers, the first of which shows off the “Manufacturing” environment, while the second puts the “Rail Trench” area on display.