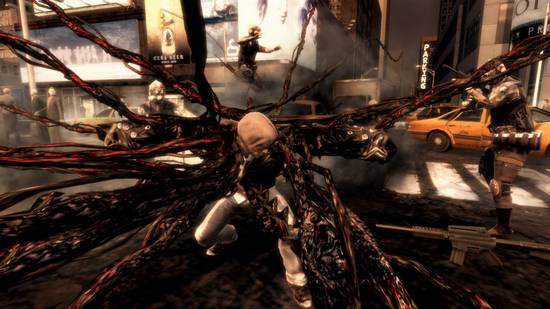 Prototype, the game where you play a poor soul that has no idea who he is but has the power of a god. Run anywhere you want, gain super powers, and destroy anything you want in this sandbox game. The hype on this game is getting bigger and bigger, but not much had been shown off.

Well, a good section of the game was finally shown off to me and I’m here to tell you all about it. So how’s New York City doing with a man that has the powers of a God and a city that has been exposed to some kind of virus? Hit the jump to find out. 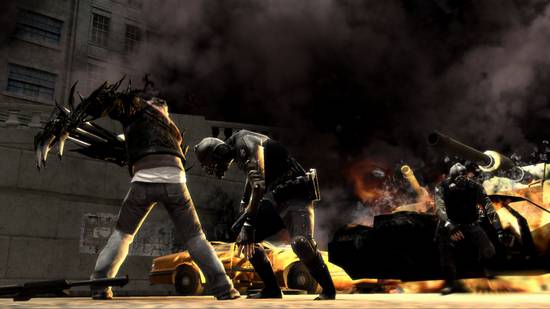 The demo starts off with the main character in the middle of New York City. The city has been infected by some virus, causing people to wander the area in a zombie-like state attacking anything that isn’t like them. These creatures seem to have some relationship with you as they can detect you even if you’ve transformed into someone else. They will give chase if you try to run away, but will quickly give up if you get too far from them. The second form of these zombie-like creatures, called the Hunters, will not stop hunting you until you’ve been killed though. You have to kill them and lucky for the main character, he has a ton of attacks at his disposal.

Over the course of the game, you’ll gain several defensive and offensive attacks. We were only shown a few for this demo, which were the hammer, whip, claws, and blades transformations for the offensive stuff; the shield power was shown off from the defensive weapons. All the power-ups can be upgraded to become stronger, and offensive and defensive powers can be combined. Throw on the claws and shield powers and you’ll plow right through enemies as you run through them instead of just jumping over them.

You also have special attacks, which are these massive devastating attacks meant to be performed on a group of enemies. Have the whip power-up on and you can make a ton of sharp whips pop out of the ground and pierce anyone within the attack radius. All the offensive attacks you have will all have similar super attacks. 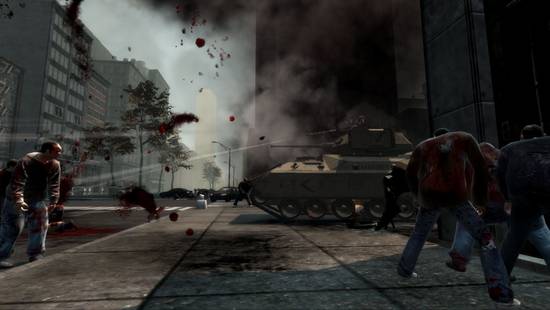 The city has three sections going on at all times. There’s the infected side, the military side and the civilian side. Take out the infected buildings that produce more infected people and the military will expand. Take out a military base and the infection will rise. It’s a constant power struggle and you can manipulate the out come however you want it to be.

You can make some Hunters follow you into a military zone, which will prompt a battle between the two groups right there. Then, since you’re disguised, you can pick up a gun and help the military fight the zombie like creatures. Just grab a gun and blast away. So long as you don’t do anything suspicious, the military won’t bother you.

From my early look at the game, I think I may want to help the infection spread. Once the military is aware of your presence, they will attack you in full force. You can escape by transforming into someone else while in hiding, but they prove to a big pain throughout the game. The infected people on the other hand, are just retarded and will barely cause you annoyance. 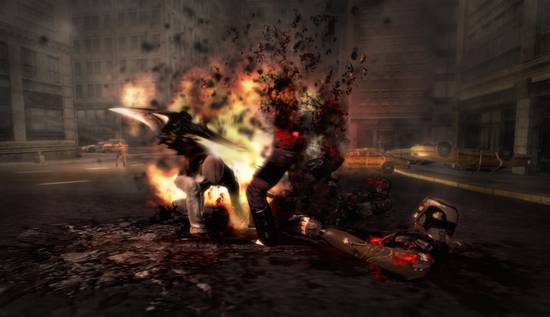 One of the missions in the game has you going around the city to destroy several detectors throughout New York. All of them are located on rooftops, so you can either hijack a helicopter or simply run right up the side of a building until you hit the roof and cause some chaos. Once you’re detected, the military will call for backup. If there’s a military base nearby and you keep getting your ass handed to you because of them, you could take out that military base then go in and take out the detectors. Backup will still come, but now the military is coming from a greater distance away and it’ll give you enough time to complete your objective.

The main goal of your character in the game is to find out who you are. Throughout the city, there are key people you have to consume to figure out your past. You can also consume key military figures that have skills you can utilize, such as the soldier that can call in air strikes.

New York City is in the middle of an apocalyptic battle and the city will evolve based on your actions as you play through the game. The game will be out for the Xbox 360 and PlayStation 3 this fall.