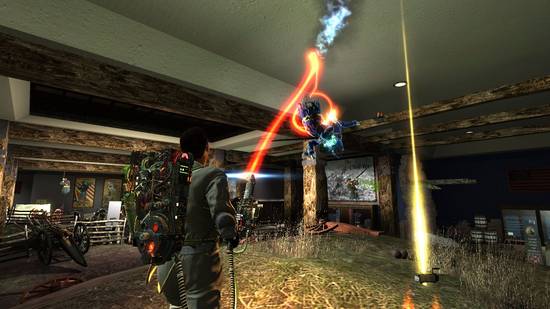 Who you gonna call? GHOSTBUSTERS! People dropped a brick when they heard that a Ghostbusters game was officially in the works. Not much has been shown off until this past month, when Sierra invited me out to get a firsthand look at how Ghostbusters is shaping up.

So how’s it look? The short answer, amazing. For the long and detailed answer of what I got to experience, just hit the jump. 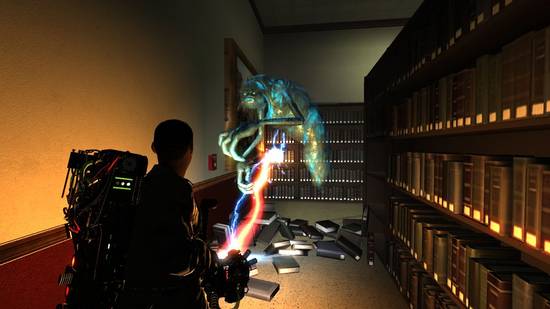 We’re dropped right out front of the New York Public Library, which has been faithfully recreated for the game. We’re shown a bit of the street where a crowd of New Yorkers has gathered to get a glimpse of the famous Ghostbusters. After checking that out, we’re led seamlessly into the Library, and we enter the giant reading room. A couple of button presses later, a car magically appears in the room, setting up one of the new guns in the game. The purpose here is to get a feel for how the Velocity physics engine really works. The engine was built in-house, and it looks to be mighty impressive.

The new gun is called the Slime Tethers and is a two-part gun. First, you shoot an object, such as the car, for example. Then shoot something that’s far away, such as the ceiling. Once the secondary part of the gun attaches itself to something, it will then automatically pull in whatever was shot at first. This can be chained together and after a button press, more cars and even people all fell into the room. The people are lifeless and will fall down realistically based on their environment. So if a guy fell on top of one of the reading tables, his limbs would dangle off appropriately.

The demoer then shoots more Slime Tethers and attaches cars, people and other objects to the ceiling all chained together. After messing around the reading room for a bit and gluing practically everything together, we ventured off into the basement of the library. The basement has been flooded and we get to see the Hydro Dynamics engine in action here. Water will act just like in real life, so you’ll see books float and the water ripple as you move about it. 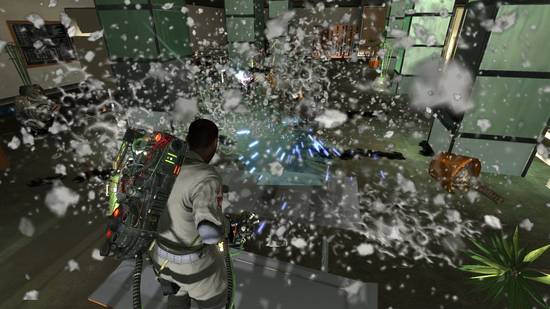 All seems fine in the basement until a ghost that has formed itself with a bunch of the books in the room appears. This is one of the more powerful monsters that will require the help of your A.I. team members. Since this is just a tech demo at the moment, the book ghost won’t attack you.  You, however, can attack him all you want. You can constantly shoot the ghost with your Proton Pack and watch the books disperse. The ghost will simply reform and stand around looking all around the room.

After this, we’re taken back outside and we’re standing on top of a platform looking out on the street. When playing the game, citizens will stop what they’re doing to catch a glimpse of the legendary Ghostbusters. That’s what we were seeing here, as a few citizens stood near the player and stared on. We were then shown the full crowd physics as over 1500 people were dropped into the streets surrounding your platform. The crowd was alive and walking around all over the place. The crowd A.I. is very intelligent and the crowd can move about without getting in anyone’s way.

Finally, before we moved on to the gameplay of Ghostbusters on the 360, it was revealed that PS3 version of Ghostbusters will use the Sixaxis to wrangle ghosts that have been caught in the Proton Stream into the ghost traps. 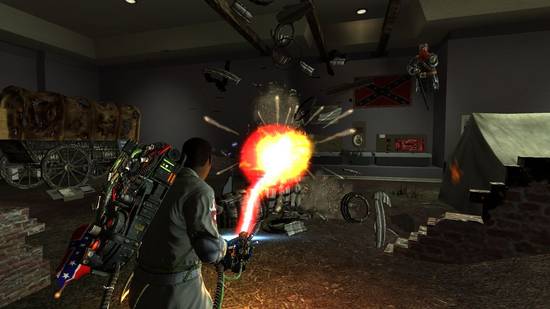 Now it’s time to see how all of this works during the actual gameplay. You play as a new recruit who has joined the Ghostbusters team. Many people were wondering why you’re playing as a newbie instead of as one of the core four. The developers felt that the interaction with the main four Ghostbusters wouldn’t work if the player plays as one of them. The dialogue wouldn’t seem natural, so they opted for this path instead.

Your team has been called in to investigate a ghostly disturbance in one of the buildings in New York City. All is quite so the demoer whips out the P.K.E. Meter to try and track down some ghosts. Once you get close enough with the P.K.E Meter, the ghosts will come out of hiding and then it’s time to go hunting.

As the Proton Pack was being fired across the room, books were being shredded, paper was flying all over the place and anything that crossed the Proton Stream got tore up. As this was happening, I noticed that there is no HUD at all. The game is in a third-person perspective, so you have a clear few of the Proton Pack on the back of your character. There will be visual indicators on the pack that will tell you what weapon is equipped at the moment. You have unlimited ammo as well, but you have to be careful: your Proton Pack can overheat. It will leave you vulnerable for a bit should that happen. The controller will start to rumble like crazy, too, to remind you that you’re near critical levels. 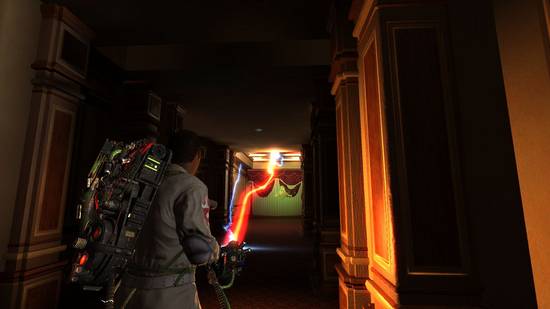 An in-game cut scene started to take place, but it wasn’t made clear what was being said as the demoer started showing off some of the other guns such as the Slime autogun, which shoots out blobs of sticky slime.

After everyone finished talking, it was time to head to the roof, but Stay-Puft wasn’t ready to give up. As you climbed the stairs upwards, Stay-Puft continually slammed the walls all around you until you finally got to the roof. Before the big battle was to take place, the roof was overloaded with ghosts and it proved too much for the newbie. The health system is based off the regenerative system that I love so much now. But, even if you do get killed, you still have a chance of coming back to life. So long as your team members are alive, they can come to your aid and revive you. You can do the same for them should they fall in battle as well. The demo ended with the Ghostbusters about to take on the Stay-Puft Marshmallow Man. 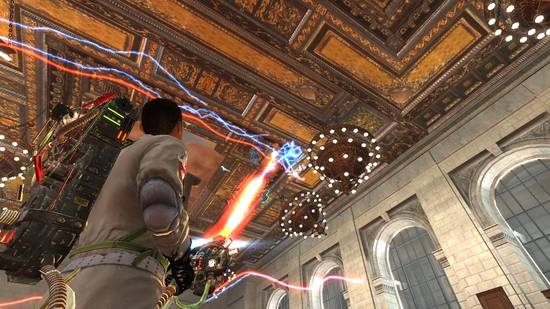 Ghostbusters will feature multiplayer modes for both LIVE and PSN, which will allow you to play as the four main Ghostbusters. Here you’re just going for points and high scores as you go through special maps designed for multiplayer.

The best part of this whole game is that Dan Aykroyd is so heavily involved with the project. He’s involved with every bit of detail right down to what the newer weapons are called, based on the Ghostbusters mythos. The game takes place about three years after the second movie and will be revisiting scenes from previous movies. You’ll be encountering some old enemies too. The game should hopefully be released in October, just in time for Halloween.