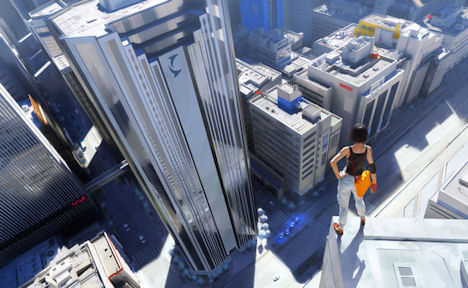 The Guardian has an interesting article up at the moment which discusses the review performance of DICE’s high profile first-person-runner Mirror’s Edge. Comparing the review scores to this year’s biggest releases, writer Keith Stuart expresses frustration that a game as innovative as Mirror’s Edge won’t receive near perfect grades from the gaming press.

The reason? Game reviewers are not enough like film critics, and its flaws should be overlooked simply because it’s innovative.

“… If it were a movie, Mirror’s Edge would be critically lauded by the specialist film press – it would be considered a forward-thinking masterpiece,” Stuart argues. “Sure, it’s dangerous to compare two such different media, but there are key similarities – one is the way in which critics should be able to deconstruct the experience on offer and draw from it undeniable values that outweigh concerns about basic construction.”

Stuart continues, suggesting that fundamental design flaws should be glossed over simply because the game is unique: “So should we really be marking Mirror’s Edge down for control issues – a game that aspires to re-interpret the very interface between player, screen and character?”

For one reviewer’s answer to this question, and a full response to the subject, read on …

To answer the question — should we mark an innovative game down for control issues? If it’s a serious hindrance to a game’s enjoyment, then yes, absolutely!

The presented argument, while it puts forth interesting notions, seems to be about giving a free pass to games that are “innovative” even if they might not be very fun for the player. Games can be mindblowing, artistic endeavors, yes, but they need to be enjoyable first and foremost, and if a game frustrates with poor controls or bad design choices, they don’t deserve to achieve a perfect review score.

In the case of Mirror’s Edge, what I see is a game that has meticulously gone out of its way to be “different.” From the unique first-person-action elements, to the bright colors, clear skies and even the Asian, brunette, modestly chested female protagonist, this game is one that has tried to lay the exact trap that Stuart has fallen into — inflation of a game’s merits simply because it’s pretending to be some brand new innovation. Frankly, the games press has actually surprised me by seeing through all that for once and giving the game an honest appraisal, whatever their opinions may be.

I would argue that the gaming press often does the opposite of what it is being accused of. The word “innovation” is thrown around a lot these days, especially in the post-Wii age where people have convinced themselves that each game must be completely different from the last. While a game should not be a near carbon copy of another, the phrase “doesn’t innovate” is one I hear a lot, and I don’t feel it’s a valid complaint if the game is still of an excellent caliber.

This is not about the quality of Mirror’s Edge, which I am yet to play through entirely. We posted our review and Nick was very fair in his assessment. What he did not do was simply ignore the problems just because it was “new,” which is what Stuart is suggesting we do.

I am reminded of Space Giraffe designer Jeff Minter, who famously threw a tantrum over Frogger outselling his game and blaming the poor sales on the fact that his game was new and people didn’t want that. It’s a nice excuse to use, isn’t it? The truth of the matter, however, is that Frogger simply remains a better game than Space Giraffe could ever hope to be. Minter’s tantrum serves to highlight this mentality that innovation should be rewarded, regardless of quality.

Factor 5 reacted the same way when Lair received poor grades. Game director Julian Eggebrecht accused the games media of being unable to understand the “innovative” game, which wasn’t even all that innovative. Similarly, Too Human creator Denis Dyack has swept away criticism of his game by hiding behind what he claims is “innovation.”

Innovation is a convenient new word to hide behind, especially as it can be used to call a reviewer’s intelligence into question. After all, if you don’t like an “innovative” game, you have to be ignorant and stupid, right? We have seen examples of developers using this preconception to play a sweet tune indeed. People like The Guardian‘s columnist are the instruments.

Another thing to consider is what the role of a games reviewer is. What truly is the job of a reviewer? Is it to delve deeply into a game’s subtext, break it apart and analyze its artistic merit? Or is a reviewer’s job to help you decide whether or not it’s a good fuckin’ game? I do not approach this job with the intention of blasting apart game design philosophy and drawing metaphors about how the designer is trying to get in touch with his feelings about his father. This is because I am a reviewer, not a critic.

What Stuart wants is a videogame critic, and I think it’s unfair of him to lump the roles of critic and reviewer into one entity. That’s not how it works. I think more videogame critics would be a great thing, actually. We could do with more writers that provide deep and engrossing game analysis. However, I disagree that reviewers should be the ones doing that. Comparing a film critic to a game reviewer is not only wrong due to media differences, but professional ones as well.

Ultimately, innovation has its place in the games industry, of course it does, and analytical critics are more than welcome to go with them. However, we play games to have fun, and most of us want an experience that caters to that simple goal. Videogames can be beautiful, mindblowing, intense experiences, and I will defend their right to be considered art forever, but that doesn’t mean a game can hide behind claims of innovation and expect a free pass.

Cutting someone’s head off with a sword strapped to a baby horse is innovative. You still go to jail for it.

[Article discovered thanks to Negative Gamer]