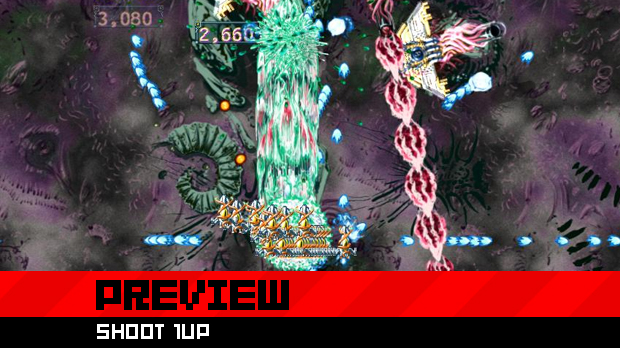 Did that headline grab your attention? Good! Considering how many sloppy, hastily-designed games there are up on the Xbox LIVE Indie Games channel, even this far after launch, it’s easy to lose faith and simply write the whole lot of ’em off altogether.

Not everyone trying to make games falls into that category, thankfully. We’ve got guys like Nathan Fouts (Weapon of Choice), who are more than willing to take the time needed to put out a quality product. His latest game due out on the service, a shoot-’em-up called Shoot 1UP, is exactly that.

I had the opportunity to play a preview build of the game recently, and now I’m here to tell you that Shoot 1UP is definitely one to watch if you’re in the market for an independent game. Read on to hear about my time spent with it, or at the very least, just take a look at the weird pictures I took.

As someone who is barely competent at shmups, I was hesitant to even try Shoot 1UP. Failing at videogames is not exactly at important issue on a larger scale, but it’s also not something we ever want to find ourselves repeatedly doing.

I don’t know if it’s because the game’s concepts speak to me and are relatively easy to grasp, or if I just made it through to the end of Shoot 1UP by sheer luck. It was probably because I chose the easiest difficulty. That might have played to my advantage. Maybe.

The takeaway here is that you don’t have to be skilled in the way of dodging bullets to succeed at this game. You may start with one ship as per tradition, but soon you’ll be collecting power-ups from deceased enemies that add another one to your arsenal.

The system may sound like something out of Galaga, but it’s really not. In Shoot 1UP, you can have up to 30 ships in your control at once; if you’re doing it up co-op style, that number doubles. You might be wondering how any sane person can successfully keep track of that many things at once. I’m still not entirely sure I know the answer myself.

Part of the game’s solution is to give you control over how your group of ships is set up. There are dedicated buttons for increasing and decreasing your formation size. Feeling insane? Spread your guys out horizontally all over the screen and reap the benefits of your risky nature. Enemies will drop out more points for you to collect on top of the points awarded for killing them in the first place.

Put more simply, if you aren’t super comfortable with shoot-’em-ups, you can still succeed — so long as you play it safe by keeping your phalanx of ships close together. Of course, if you want to shoot out an all-powerful stream of energy and feel like a badass, you can’t keep your ships right on top of each other. Throw in the insanity of the imaginative enemies and ridiculous backgrounds, and the decision to stay close or spread out isn’t so obvious.

Other factors that play into your Shoot 1UP strategy include the ghost power-up, shields, and purposely killing off your loyal troops. First, the ghost power-up: once activated, it adds a mirror image of your formation to the playing field. This is especially useful for enemies located below you, as the ghost versions of your ships aren’t destroyed when they come into contact with foes.

Shields are activated once you take a rest from shooting for a few seconds. A circular bubble appears around each of your ships, and once you fire again, anything that comes into contact with your shield is damaged. This works well for the bosses that fire streams of bullets all across the screen. Tricky dodging isn’t necessary if you plan ahead.

Similarly, each time you lose a ship, it explodes, taking out all of the smaller enemies nearby. Usually this happens accidentally, but there are times when it’s best to kamikaze a few of your servants for the greater good.

As I mentioned before, the mechanics for Shoot 1UP are pretty easy to grasp after a few minutes. They work well at giving less confident players a chance to do well, while also offering madmen the massive amount of points they crave for being totally nuts at shmups.

Nathan Fouts’ passion for wild alien designs becomes immediately apparent upon booting up the game. The bosses … what can I even say about the bosses? They are all massive, cool-looking creatures. One of them has detachable metal boobs that fire bullets out of turret nipples. Seriously. So good.

It’s also worth mentioning the stage littered with whale carcasses. Yeah, that happened. I’m not entirely sure what dead whales have to do with anything, but the game is somehow better off for it. All of the uncanny designs for levels, enemies, etc. come together to make Shoot 1UP highly memorable.

As of this time, no price point has been chosen, but we were told a February release for the game is sounding doable. At any rate, Shoot 1UP will be out pretty soon; hopefully this little write-up will have you welcoming its debut with open arms. The Indie Games channel is still far off from where most of us would like it to be. Do your part by supporting the service’s better titles.