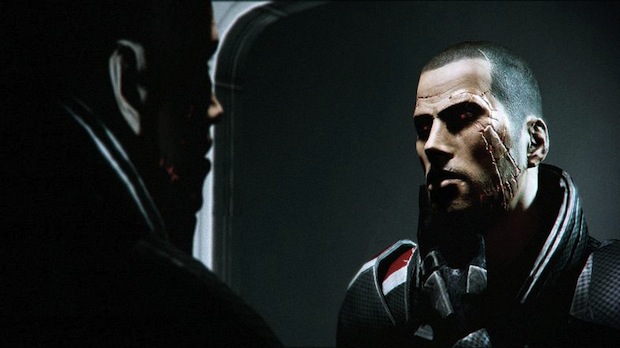 Chances are the majority of you, the Destructoid readers, are fast asleep or drunk and dressed like a vampire right now. It’s OK, we understand — the Halloween season is happening right now. But if you find yourself not in the mood, check out the above Mass Effect 2 image because it might just tickle you in the right ways.

This festive image jogged my memory. Before E3 happened, an issue of Official Xbox Magazine teased advanced ME2 information. The cover, of course, had a shot of a pale and tired Commander Shepard. I immediately thought zombie, but didn’t mention it in our post.

Then, at E3, I saw essentially the same image in the West Hall. It was bigger and had better quality. The same thought occurred to me again. I remember asking Anthony to snap a few more photos of the entrance-side stuff for me to go along with the shot Nick took of the outside banner advertisement. The plan was to just to show all of you how terrible Shepard was looking. And, well, that went to hell after I saw the demo behind-closed-doors.

But, anyway, this is a much more brutal shot of what I was thinking at the time, and a good one to boot considering the holiday. If only those banners had the wicked gaping wounds — I bet that would have gotten a massive rise out of people at the event.