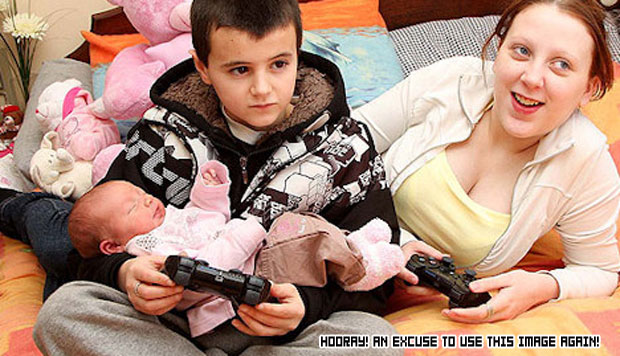 Would Arrested Development have been canceled if it were on Comedy Central? Would Joss Whedon’s past two shows have survived if they had aired on SyFy? Maybe, maybe not, but either way, you don’t hear Fox executives stating that the “failure” of those projects means that intelligent comedies or sci-fi/dramas aren’t a fit for their network. That wouldn’t make any sense, right?

Well, that’s exactly what Sega is implying about their recent attempts at “mature” content on the Wii. Yep, they’re blaming the Wii, and not the games themselves, for the ho-hum sales of MadWorld, The Conduit, and House of the Dead: Overkill. How laughably silly. Even funnier is the bit where Sega states that Dead Space Extraction‘s poor sales were a sign that “hardcore” games don’t sell on the Wii, despite the fact that all three of the Sega’s own “hardcore” Wii games outsold EA’s on-rails experiment by a fairly large margin.

Sega may have a point about the 13-year-olds hating the Wii, though. Most of the “Wii has cooties” comments I’ve read over the years were written by kids who were just entering puberty. At least, that’s my guess, based on the style of their writing.

Full quotes from Sega’s Constantine Hantzopoulos after the jump.

“I have to say that it was a space that was open and we took a gamble on it. It’s like, ‘Wow, there’s no mature games on the . Is there an audience out there?’ We did some research, it said there was an audience out there. I won’t comment about Nintendo, they did champion The Conduit as a ‘this is a Nintendo game.’ And, you know, I think they did okay by us. At the end of the day, I just think that you’re seeing kids are skewing much younger towards next-gen. And that’s what I saw out of Conduit. Because not a bad game, visually it’s appealing, right? AI wasn’t that great. High Voltage’s first real effort as an indie developer, creating their own IP. And it was a good effort, right? And there’s always Conduit 2, right? …Anyone past 12 years old was playing 360 and PS3 shooters. And at that point, you can’t tell a 13 year-old, ‘But it’s on the .’ Forget it, you know? That’s not what they see or hear. They’re not really interested in any techno-fetishist aspects of look how great it is on the …And, you know, the effort that we put behind multiplayer on that game to basically get by friend codes and provide worldwide match-making and so on and so forth, I actually thought we dove too deep…

…Circling back to the whole mature thing, again SEGA took a gamble, we put out some pretty decent content. I mean, House of the Dead: Overkill and MadWorld are great games. They really are, especially House of the Dead: Overkill. That game is funny…Yes [it did better than MadWorld]. I mean they’re both doing okay and at the end of the day we’ll make our numbers, that’s good. Conduit’s done quite well for us. It’s been slow burn. That’s the other thing you find out about the . It’s not necessarily first 3 weeks like most titles. And DS. It’s a longer burn, actually. So panicked at first, but it’s like okay.

But that begs the question, are we going to do more mature titles for the ? And it’s like, probably not. Look at . We were stunned. That was my litmus test. Basically, it’s like, okay, you got EA, who can put all the marketing muscle behind this, an established franchise that scored quite well on 360 and PS3. They should be able to actually hit this out of the park, right? We get numbers, real numbers aside from NPD, and I’m like, ‘Woah.’”