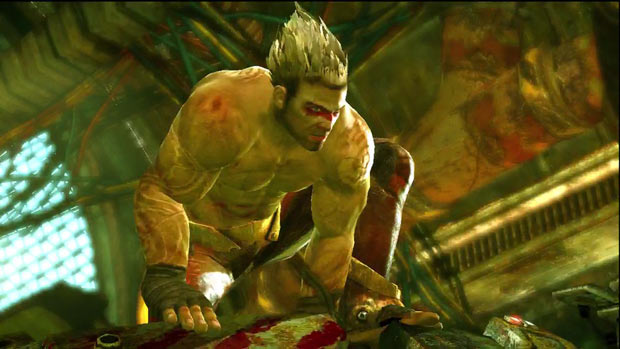 [Update: Per Namco Bandai’s request, the video of the game’s intro has been removed; an edited version of the intro — which we believe still contains some of the most epic moments of the game — has been put in its place.]

“Ever play a game and within the first 15 minutes you just want to toss the controller down and declare “Game of the Year”? Just happened,” I wrote on Twitter last week.

Now, with an embargo lifted I can reveal I was referring to Enslaved: Odyssey to the West, Ninja Theory’s upcoming third-person action adventure, published by Namco Bandai for PlayStation 3 and Xbox 360. While I’m not really ready to declare it the best game released this year (it’s not even out yet; Twitter enables me to spout impulsive nonsense), I’ll say this: the opening sequence is an incredibly polished, highly exhilarating start to what promises to be an epic adventure.

Enslaved‘s first chapter, “The Escape,” finds the game’s two key characters, Monkey and Trip, hurrying to escape from a flying slave ship fast-descending upon the city of New York. Once freed from his pod-cage, Monkey chases a mysterious young girl (soon revealed as Trip) through the ship which is crumbling around him. Monkey runs through the burning corridors of the aircraft, scurrying around and climbing broken pieces of the massive jet. Throw in some melee combat against aggressive machines and breathtaking outdoor platforming on the wings of the ship as it hurls itself towards the Big Apple, and you easily have one of gaming’s best opening hooks.

The intro is one of the seven introductory levels to Enslaved which I’m allowed to talk about, and what follows “The Escape” is surprising in its variety and scope. Given that it’s a holiday, this is all you’re going to get from me today — a full video playthrough of the game’s opening sequence. Expect more details and impressions later this week.