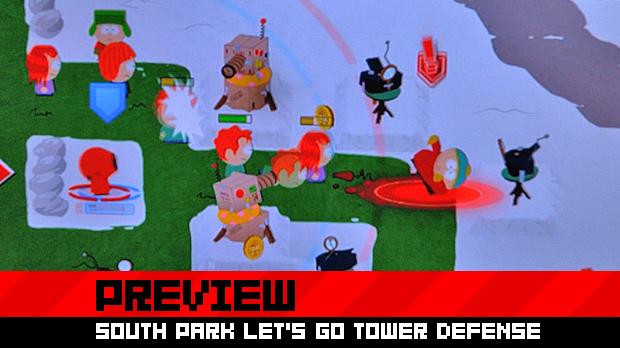 Full disclosure: I love tower defense style games. South Park’s also great, but tower defense is where it’s at for me. Put them together and you have South Park Let’s Go Tower Defense, a new game scheduled to come out October 7th on Xbox Live Arcade. The game was unveiled at Comic-con, and we had the pleasure of giving it a spin.

Now that I’ve played it, I’m glad to say that it’s not just a generic tower defense game with the South Park brand shoehorned in. Of course, the trademark humor is there. You’ll try to take down waves of enemies, just like in any other tower defense game, but now you’ll throw snowballs at hippies and old people. Oh, and the ginger kids. They need to be taken down. You can shoot them with lasers and hit them with baseballs. Fantastic.

What’s different from your typical version of this type of game (aside from the awesome PixelJunk Monsters) is that you actually can join in on the defense. In the beginning, you will play as one of the four boys, and can help out your machines of destruction with your own projectiles. Cartman and Kenny not enough for you? As you play through the game, just about every key character in the show’s cast will be revealed as a playable character, 15 in all.

You’ll have a few minutes to set up your defenses before the waves begin. Once they do, you’re free to move about the map, adding more defense mechanisms (more on that later) or throwing snowballs to help out. You can play the game with up to four players, online or in person. I played it multiplayer, and it was great: you need to help each other out. Should you die from wave attacks (like Kenny), you can have another teammate come over to revive you. This all adds a new twist to the genre, keeping you moving where you’d otherwise just sit and wait.

The defense weapons are just as crazy as the cast is. While baseball pitching machines and laser stands are great, we’re more fond of the pee balls and exploding toilets. Oh, and a cat pee tower — that’s in there. We only saw four stages, but were assured that more crazy gear would be unveiled as the game progresses. The same goes for the locales: we saw a few houses around town, but there will be eleven stages in total, taking you all around town.

We’re looking forward to playing South Park Let’s Go Tower Defense online when it finally launches in October. Our beanie caps are off to South Park Studios for changing the genre so we can play with friends.