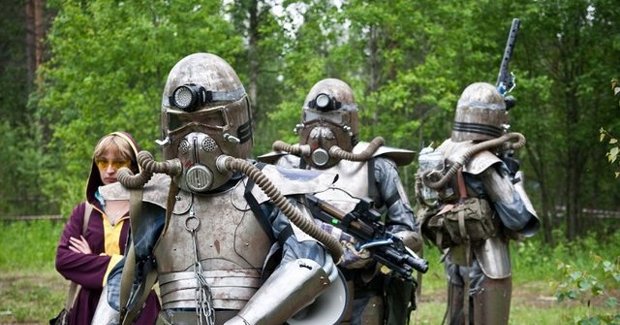 Wow. Just… wow. That’s a picture of a group of LARP (Live Action Role Play) gamers in Russia. Polish gaming site Polygamia has a huge gallery featuring this group of players from a LARP group called “Albion” playing in a fan-created Fallout story called “Nothing Personal.” The game session drew some 300 participants and is expected to continue for several months of sessions.

From what I’ve been able to grasp using the limited skills in Polish that Google Translate is able to provide, the game they are playing takes place about twenty years before the events of Fallout 3 and focus on the series’ west-coast roots in California. Familiar locations such as New Reno and Mariposa have been recreated in an old military base.

This is what happens when you get cosplay dorks and RPG nerds together. As incredibly geeky as LARPing is, I would consider playing in a Fallout LARP. Sadly, I can’t even seem to muster the time or energy to run a game of the pen and paper version so I can’t imagine trying to pull something like this off. Great work, you crazy Russians!