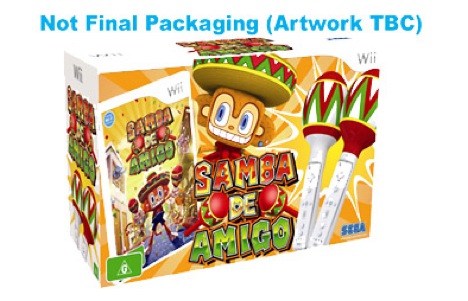 We have never been quite sure that Gearbox’s upcoming Wii title Samba De Amigo would include maracas like the Dreamcast version did. After all, the Wii Remote’s flexibility can definitely provide what Samba needs. Recently, though, a picture of the game’s box art has surfaced. As you can see, it proudly presents a maraca attachment for the Wii Remote. Kombo found the image in question at HMV‘s website. While we would love to say “maraca confirmed,” the disclaimer on the picture clearly states that the art is not final.

We know all this seems obvious. It almost goes without saying that a rhythm game as intense as Samba appears to be, without some kind of musical peripheral, would be sorely lacking in the fun department. Think of it this way. Would Donkey Kong Konga be cool without a set of overpriced bongo drums? I would venture to guess that without the drums, the game would have been reduced to smashing the GameCube controllers on the floor in a frantic attempt to feel the beat.

I contacted Gearbox to confirm that the attachment is going to be in the final packaging. In the meanwhile, check out these screens of the game we posted awhile back. What do you think the chances are that this game will give you a seizure?