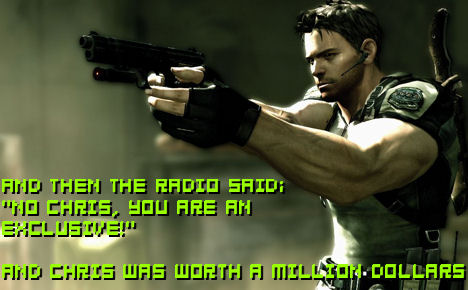 There is a rumor swimming about, as such rumors often do, concerning Microsoft and its desire to have Resident Evil 5 as a timed exclusive. The shady word on the street is that The ‘Soft will employ the same method it usually does — throw dollars at everything until “achievement unlocked” appears.

That’s all we “know” at the moment, and it’s something I’d advise taking with a large pinch of salt until anything more is said. Believable, though? Certainly. Microsoft shelled out a ridiculous amount of cash for Grand Theft Auto IV DLC, and is certainly facing tougher competition from the PlayStation 3 than it did last year. When under pressure to achieve victory, this is the kind of stunt Microsoft pulls.

Of course, just because this may be what Microsoft wants, that doesn’t strictly mean Capcom will accept any offers. If true, though, it just goes to show how far Microsoft is willing to go in order to scrape back its momentum.

[Update: That was quick. Capcom has stated that RE5 will remain a multiplatform release. That doesn’t mean MS didn’t offer, or isn’t trying, however. At least Blu-ray fans have nothing to worry about for the time being.]