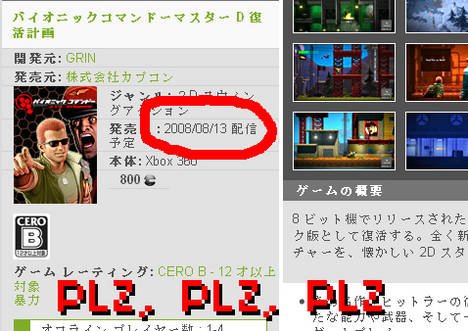 The Japanese Xbox 360 website has added a page for Bionic Commando: Rearmed and it has a date listed on it! Or, rather, it did have a date listed on it. Sometime within the two hours it took me to get around to this post, the date vanished like the Statue of Liberty in a David Copperfield primetime special.

Originally slated for release in late May, the game was delayed at the last minute for bug fixing and submission procedures. Well, it’s almost August now and I’m really ready to get my swing on. So, with a little luck, the August 13 release date will not only be accurate but global.

With the date deleted from the page, we have to consider this a rumor for the time being.  A beautiful rumor that suggests I may be a mere two weeks from blowing up the virtual head of the analogue to a mid-twentieth century world leader, but a rumor nonetheless.