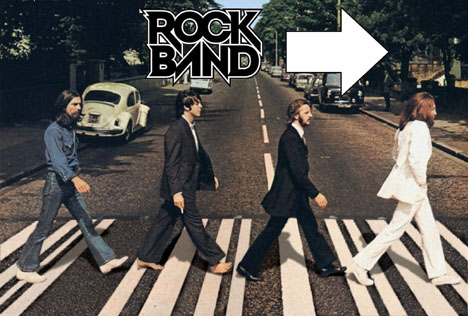 Earlier today, we received a press release saying that both Apple Corps and MTV were “to announce an exclusive agreement to develop a global music project.” Seeing as how two of the listed PR people in this press release were directly related to Rock Band, we pieced things together quickly. The two could only be working on a Beatles game, right? Maybe? Well, we combined this with rumors that we heard earlier this year on the very same topic to come to our conclusion.

The Wall Street Journal got the jump on this. They say that the Beatles have licensed songs to MTV Network’s Rock Band games, according to “several people familiar with the matter.”

We still don’t know any details. This could be a Beatles-only game, or just the addition of songs. We’ll know tomorrow when a conference call goes down.

You can take a gander at the press release below to judge for yourself.

WHAT: Apple Corps Ltd. and MTV to announce an exclusive agreement to develop a global music project.

About Apple Corps. Ltd. Apple Corps Ltd. was founded by The Beatles in 1968 to look after the group’s own affairs. The London-based company has administered the catalogue of The Beatles releases of the 1960s that have sold to date more than 600 million records, tapes and CDs. Since the 1990s Apple has piloted new Beatles projects that have become benchmarks for pioneering accomplishment and which have included The Beatles Anthology projects, the 28 million-selling album The Beatles 1 and the The Beatles LOVE show and CD. Further information on The Beatles’ projects can be found at www.thebeatles.com.