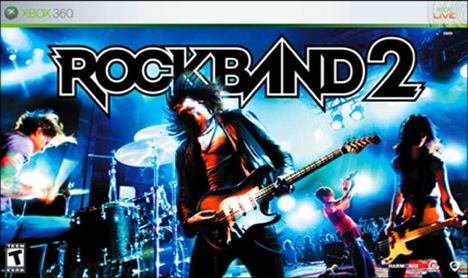 Today, Harmonix and EA have announced to IGN that Rock Band 2 will hit this September. The only catch is that potential consumers must have an Xbox 360 to join the fun early. The other “relevant” console incarnations of the game will be releasing later on in the year.

The CEO of Harmonix, Alex Rigopulos, had this to say in a press release about the much-anticipated sequel:

As successful as the original Rock Band continues to be, we’ve now had the benefit of the last eight months to listen to our fans’ requests and to build upon that foundation. Rock Band 2 is a second-generation band game that will elevate the music game experience to the next level.

Before you start clawing at the walls because you just bought the Jimmy Buffet pack, rest easy. The downloadable content for both Rock Band and Rock Band 2 will be entirely cross-title compatible. That means that anything released for either title will be fair game to download and enjoy. Even better, there will no need to litter your living rooms with a second drum kit. Every instrument from the original Rock Band can be utilized in Rock Band 2, although that doesn’t mean that Rock Band 2 won’t have its own newer and better stuff.

There is much more information available. Hit the jump to learn about the multiplayer experience, user-generated songs, and setlist for Rock Band 2.

IGN had the opportunity to have a sit-down with lead designer Dan Teasdale. One of the many things they combed over included enhanced online play. When asked about an online version of Band World Tour, Teasdale hinted at the possibility, but didn’t go into any specifics.

On the topic of user-created songs, Teasdale said, “If we’re going to do it, we want to do it right as our goal is to create a fully-realized, fully-integrated way for people to become real musicians and release quality music through Rock Band.” While that is not necessarily a confirmation that Rock Band 2 will have a music composer of sorts, we would venture to guess that if Activision’s Guitar Hero: World Tour is going to have one, Rock Band 2 probably will as well.

As to the set list of Rock Band 2, Teasdale promises that it will not disappoint. “Rock Band 2 has the strongest playlist we’ve ever assembled, and I think fans will be blown away not just at the spread, but also at the caliber of acts we’ve attracted.” Also, look forward to more complete albums in the near future and, like GH WT, a setlist composed entirely of master tracks.

Personally, I think Rock Band 2 looks to be shaping up quite nicely. Keep checking in all day as we get updates and clarifications on all the great things coming to Rock Band 2. The game will make its debut at E3, so look for even more info in a few weeks.