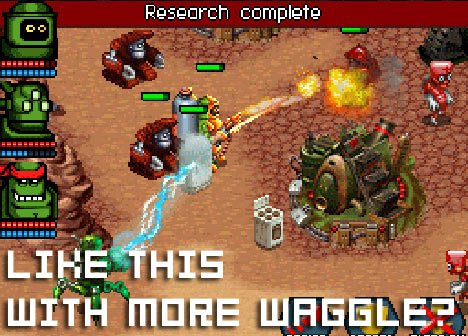 If you own a Nintendo DS and are looking for a good game to play, here’s a suggestion: Go pick up Robocalpyse. Developed by Vogster Entertainment, the handheld real-time strategy title was ridiculous solid, with clever writing, a unique style, and impressive touch-screen gameplay mechanics.

Why am I telling you this now? Well, it looks like there’s a sequel in the works for Nintendo’s other gaming system, the Wii. According to his LinkedIn profile, writer Micah Wright is currently with Vogster and he’s working on — you guessed it — Robocalypse II for the Wii since at least December of last year.

The original game was published by Tecmo and seemingly sent to die, a new IP released during a hectic holiday season with little-to-no marketing. It’s too bad, because Robocalpyse definitely worth a look. Let’s hope it gets a second chance — and a better shot at retail success on the Wii.