Including the Bandit survivor, the Grandparent boss, a stage rework, and lots of lore

[Update: The console version of the Anniversary update is here — mostly. You can now get it across PS4 and Xbox One, while the Nintendo Switch update is coming “soon.”]

[Update 2: Nintendo Switch got the Risk of Rain 2 Anniversary update today, and the PS4 and Xbox One versions were patched to tidy up lingering bugs.]

Risk of Rain 2 is a game that refuses to go on the back-burner, and for good reason. The next big content update — the last of its kind before Hopoo Games dives into paid expansions — is coming to PC first on March 25.

The full patch notes also mention a nice surprise: the final stage was completely “redone” with “unique objectives” and a “new, large arena to play in.”

In a fun twist, the “scrapped” Bandit that modders have expanded upon will still be playable even after the official Bandit joins the game on March 25. “Working on the Bandit was both fun and rewarding for us, because it really highlighted how much better we’ve gotten at making content since the original scrapped inception of the Bandit in internal development,” Hopoo Games wrote in a Steam post. 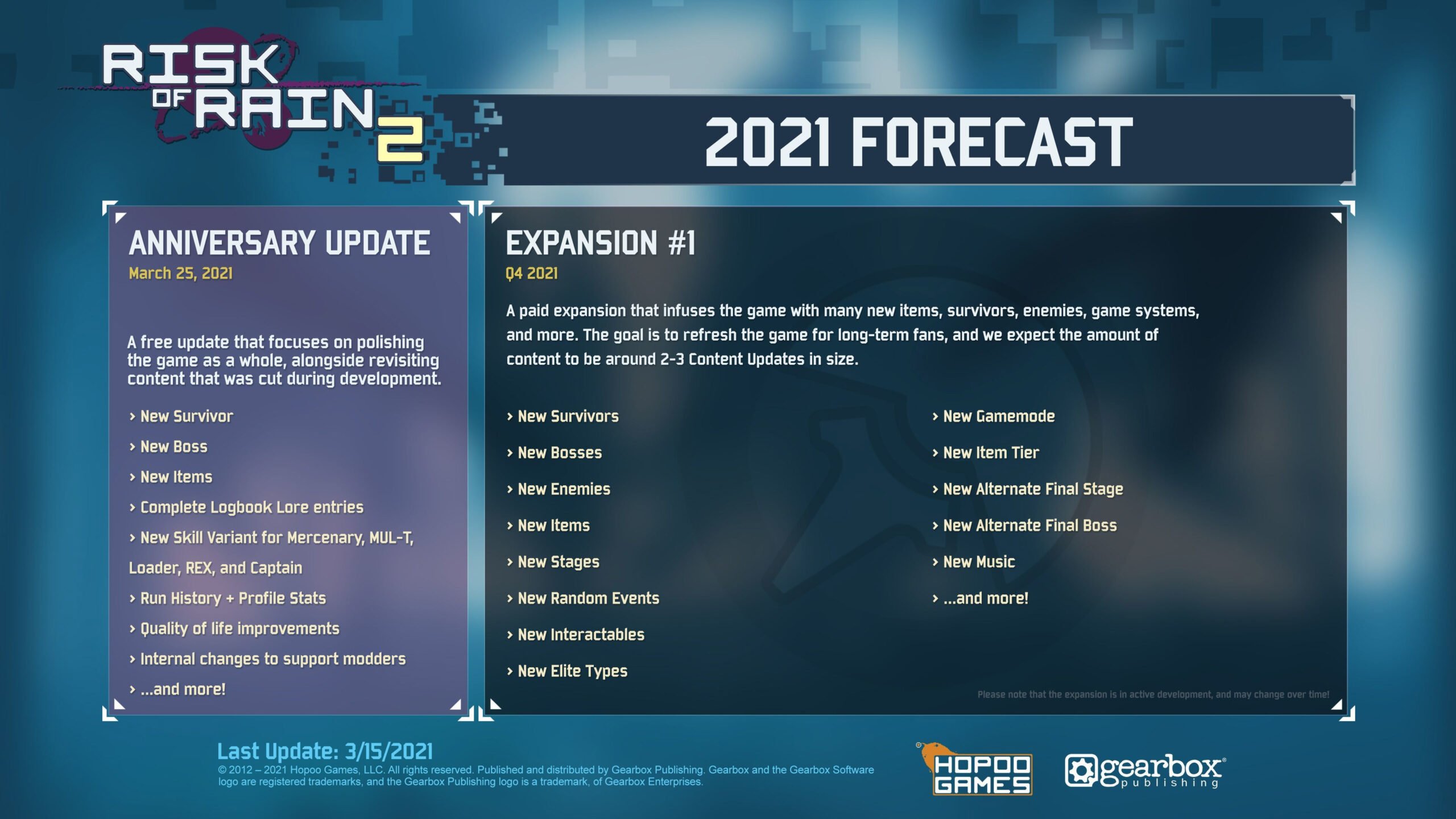 Once this update is out and the dust has settled, the team will “shift towards working on the Expansion. “As we develop and shape it over time, we will let players know how it’s going, and how big it will be.”

As we’ve heard before, this will be a substantial paid add-on meant to “refresh the game for long-term fans.” Hopoo is aiming for a multi-platform simultaneous launch with PlayEveryWare at the end of 2021, and to that end, they’ve got an internal team at Gearbox Software helping out “to bring all future content of Risk of Rain 2 to our console players with even closer parity to our PC version of the game.”

Even if the dates slip, it’s nice to know that consoles — not just PC — are a priority.

With the way the post-launch support has been going, this shouldn’t come as a surprise, but it’s worth reiterating: Risk of Rain 2 has done really well for itself. It’s at four million sales “on Steam alone.”

I’m super curious to see what this crew works on next once everything is said and done.

“We have a lot of exciting things cooking — both for Risk of Rain fans and Hopoo Games fans in general — and we can’t wait to share them with you — one day.” Are fans reading into “cooking” too much?