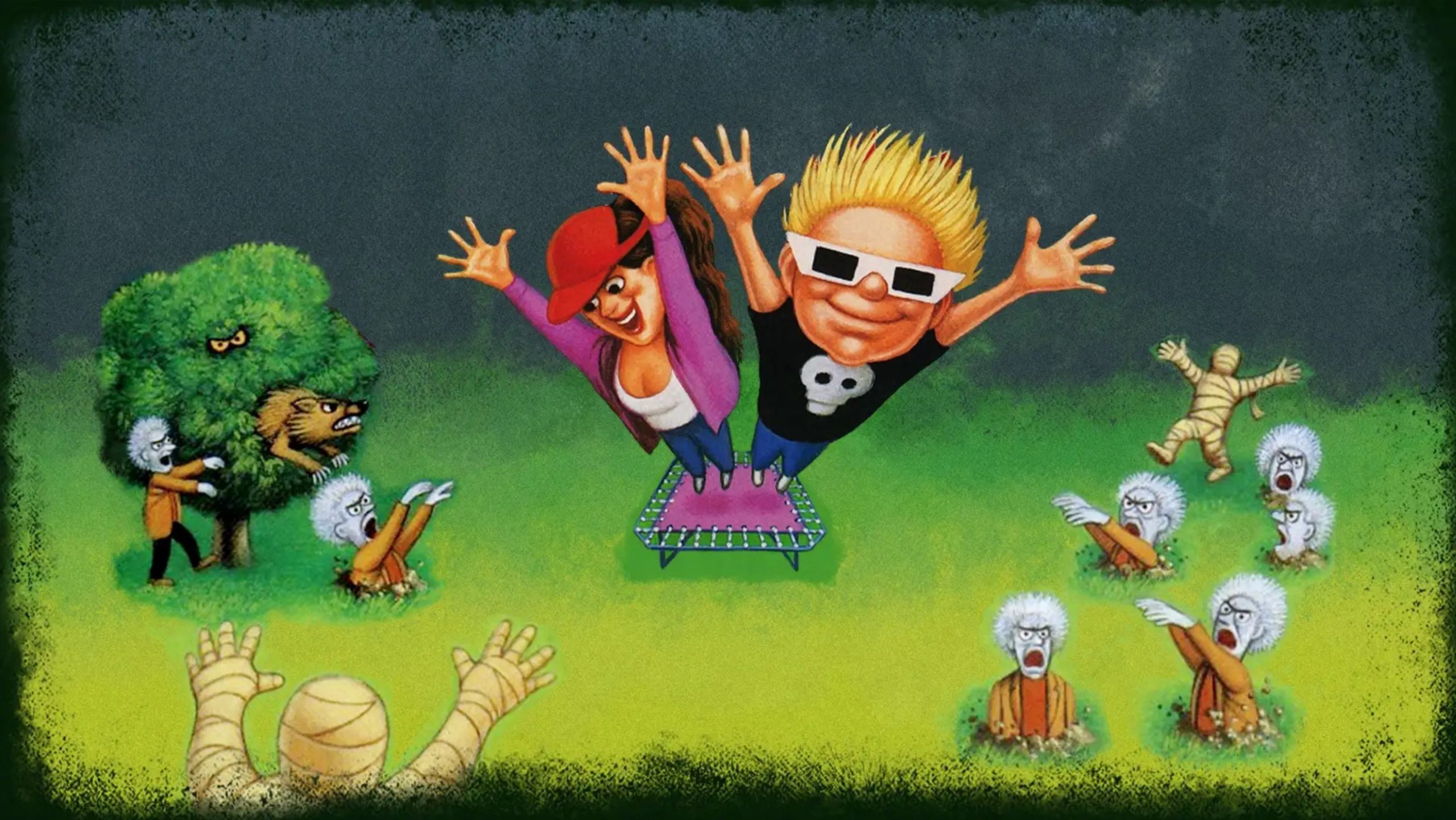 Right after Aliens Ate My Babysitter!

When I started collecting games, Zombies Ate My Neighbors was an important title for me. Specifically, it was a title I used to share my erupting passion for retro games with other people. Woe are those who were around me at the time, for they were forced to suffer co-op. River City Ransom, Toejam & Earl, my thirst for pressuring friends into enjoying classic titles was endless.

That might be why I don’t have friends anymore.

Ghoul Patrol is a new one for me. Who even played Ghoul Patrol? Technically, it’s a sequel to Zombies Ate My Neighbors, but not intentionally. No, another development team worked on that particular game, and the decision to sequelize it didn’t come until later. But now I have the chance, since a compilation has been put together just for us. 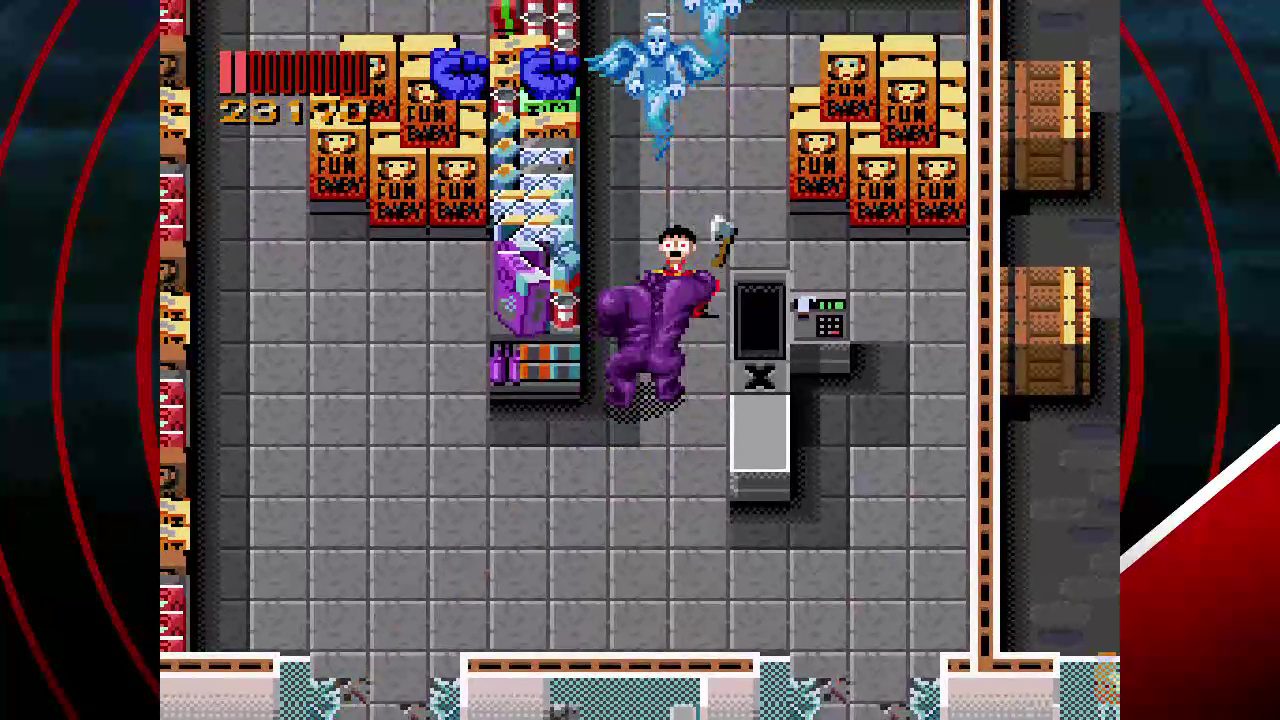 I’ve always described ZAMN as a game that is fun until it isn’t. It’s a rather entertaining top-down shooter with a tonne of style. A parody of horror tropes of all varieties that does a decent job instilling fear in the player without changing its tone. It’s all fun and games until a chainsaw-wielding maniac starts chasing you through a hedge maze.

It can get deliciously frantic as you try to find your way to the neighbors. There’s a surprising amount of strategy as you decide whether to search for a key or just blast a hole in the wall. On two-player, it can be even more enjoyable, as you coordinate how you’ll proceed and where you should go next. Or shout at each other, because you told them that there was a neighbor there, but now they’re dead.

Things are pretty identical to the SNES version, as far as I can tell. Nothing fancy was included like, say, a persistent HUD like the Genesis version had. No, the extra screen real estate just goes to borders you can’t change. Aside from some questionable changes to the control, Zombies Ate My Neighbors is the game you remember. The title that you and a friend would pick off the rental shelf week after week and never actually see the end of it. 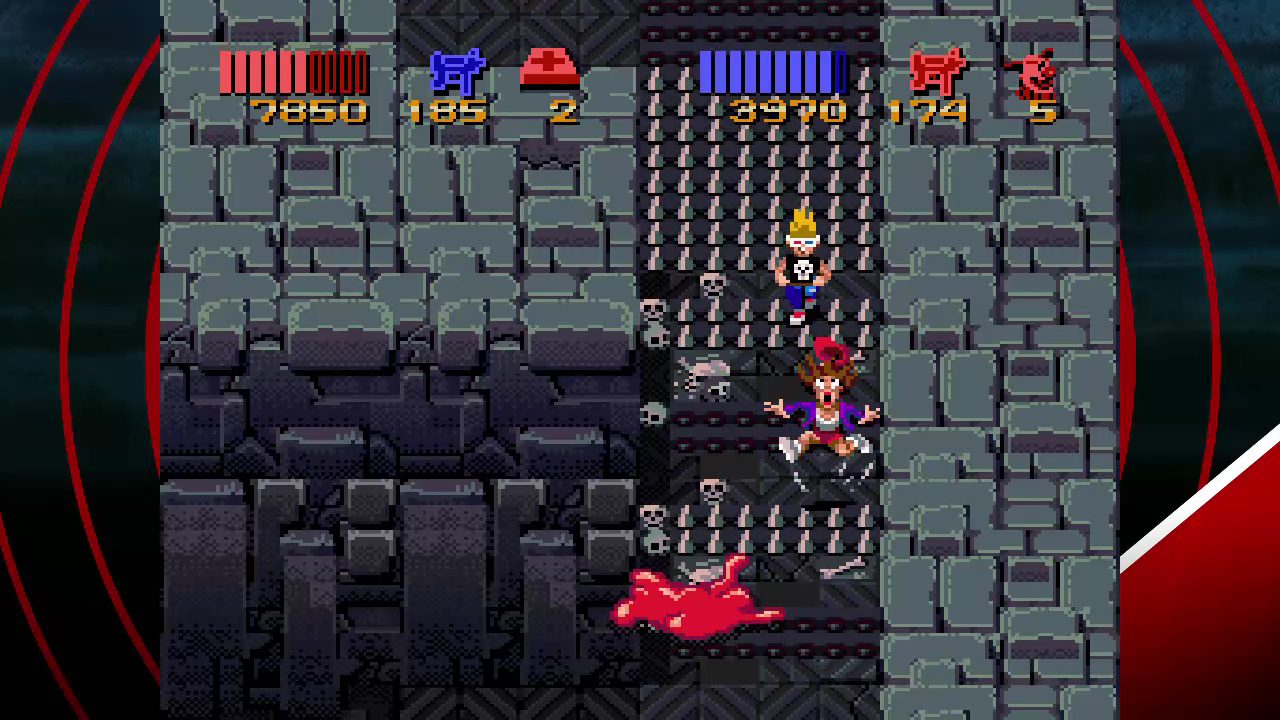 Where it stops being fun is later in the game when all but one neighbor is dead. As the name implies, yeah, you have to save your neighbors. You start off with ten of them, but gradually they’ll die at the hands of the monsters, and when that happens, you’re given the game over.

That was fortunately addressed here since the passwords you are given every four stages start you with all victims intact. While that may seem like a small change, it means the game stays entertaining all the way through its 48 levels.

There are some issues with the original design that haven’t been addressed. Particularly, there are too many weapons and items. It’s neat that certain weapons are super effective against specific enemies, but trying to locate them in your pockets while said enemy is charging at you is annoying. Even getting back to your default squirt gun requires you to cycle through every weapon in your purse. As weapons pile up, this just gets more frustrating. 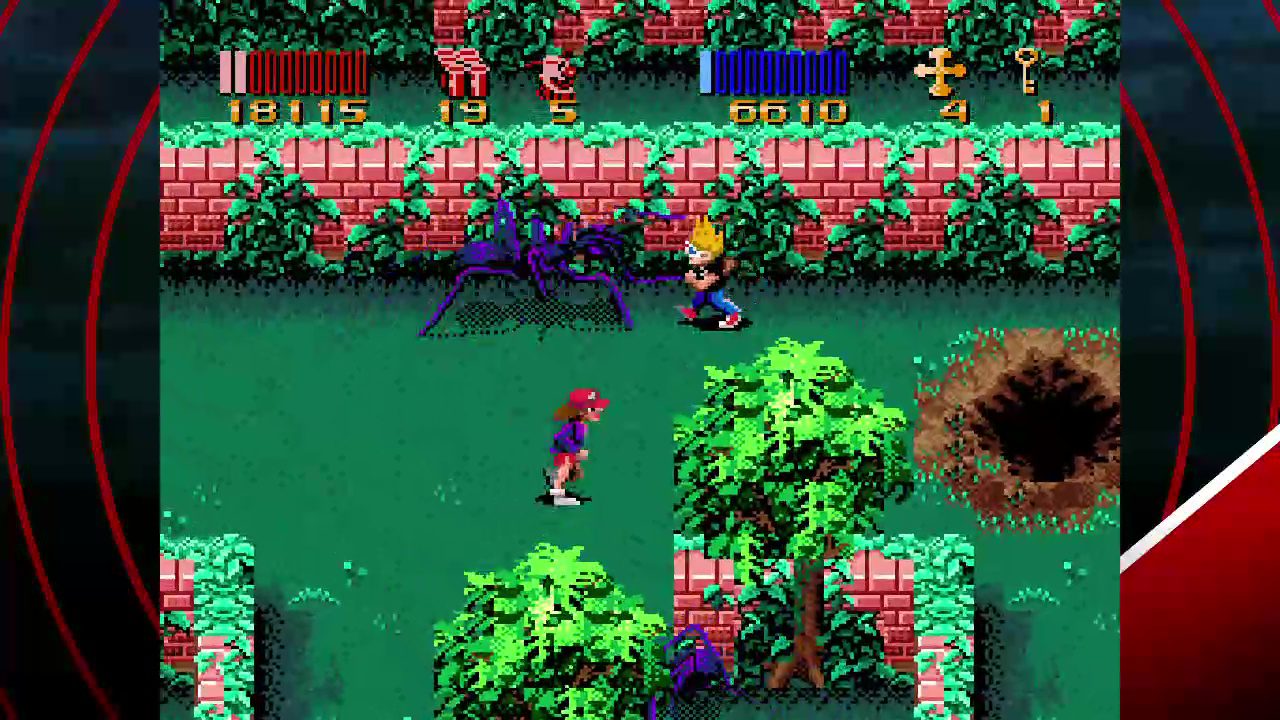 At least it’s not as bad as I’ve been told. Everywhere I’ve looked, Ghoul Patrol has been described as a sequel in name only. Truthfully, there’s a lot of resemblance to ZAMN. It doesn’t feel like the characters were just dropped in, even though they apparently were.

You’re still searching the levels for the neighbors and fighting monsters while doing so. If there’s one way that Ghoul Patrol is inferior to ZAMN, it comes down to pizzazz. Ghoul Patrol is simply less energetic — it doesn’t have the horror movie references, and it comes across as a little flat. Going from one to the next isn’t too jarring, but next to ZAMN, Ghoul Patrol just feels like a curio. You play it for completion’s sake, but otherwise, it can just sit in the corner.

There are boss stages that cap out each set of levels. Be ready to dish out your entire arsenal on them, because they take forever to kill. It’s not fun, but you have to beat them to get a password, which is pretty lame. It requires you to get through a set of levels and defeat the boss, just for the ability to continue, and that’s just a bit much.

Even still, Ghoul Patrol is okay. It’s decent fun, though it has far fewer levels than ZAMN at 18, including bosses. It might still take a while because progress can be more difficult than in the previous game. 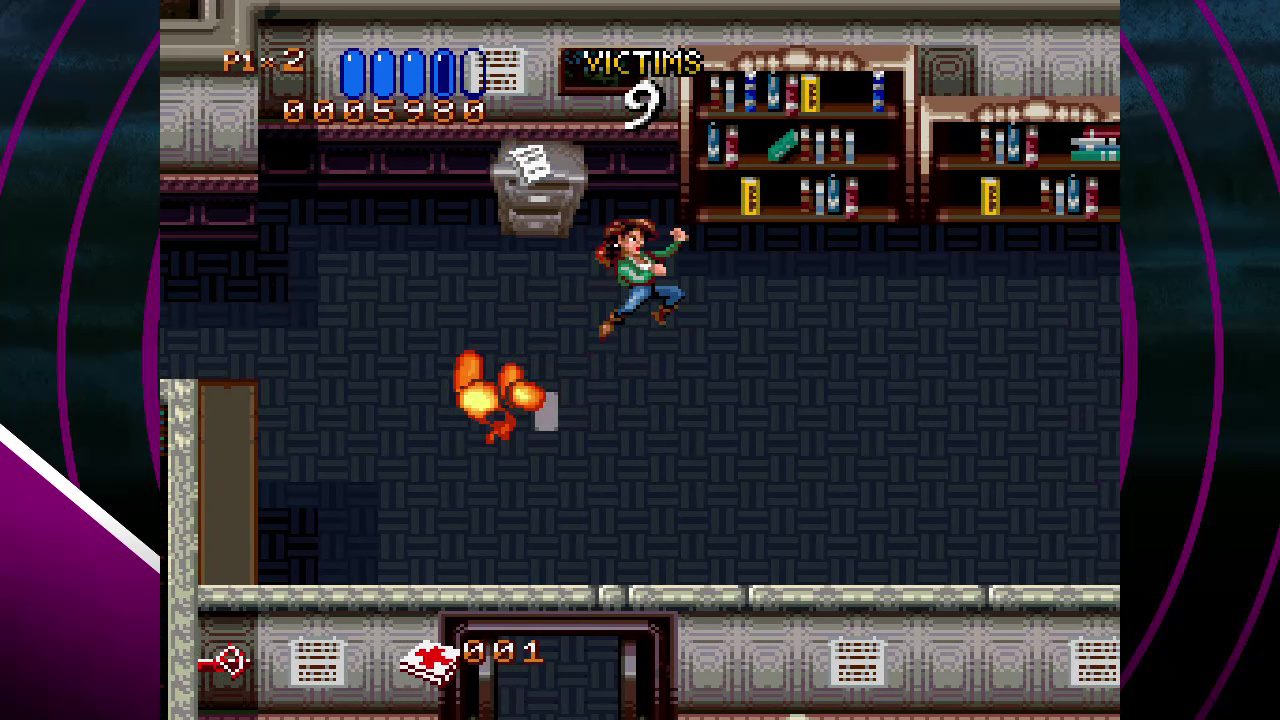 The biggest issue here isn’t the games — both are decent fun, but the package leaves a lot to be desired. It’s tempting to say that both games were presented in their original format, but that’s not entirely true. Both have their title screens completely clipped out in favor of picking characters before the game launches and skipping straight to the game. It’s weird to say this, but I feel like Zombies Ate My Neighbors’ title screen with its creepy music is part of its charm, and it’s just gone here.

Another thing that threw me is that they changed the button configuration. Y is shoot on the SNES as the Gods themselves would have crafted it, but here it’s A. Using an item is Y, and you wouldn’t believe how many times I fucked that up and wasted an item. X and B are to change weapons and items, but being away from the game, I couldn’t tell you which is which. Hopefully, control binding will be patched in, or at the very least, someone will fix this mess.

The trade-off is both EU and NA instruction booklets, the ability to view sprite animations, and an interview with one of the developers. The interview is informative, but there’s only one for Zombies Ate My Neighbours. That’s too bad; I’d be more interested in hearing from the Ghoul Patrol team. 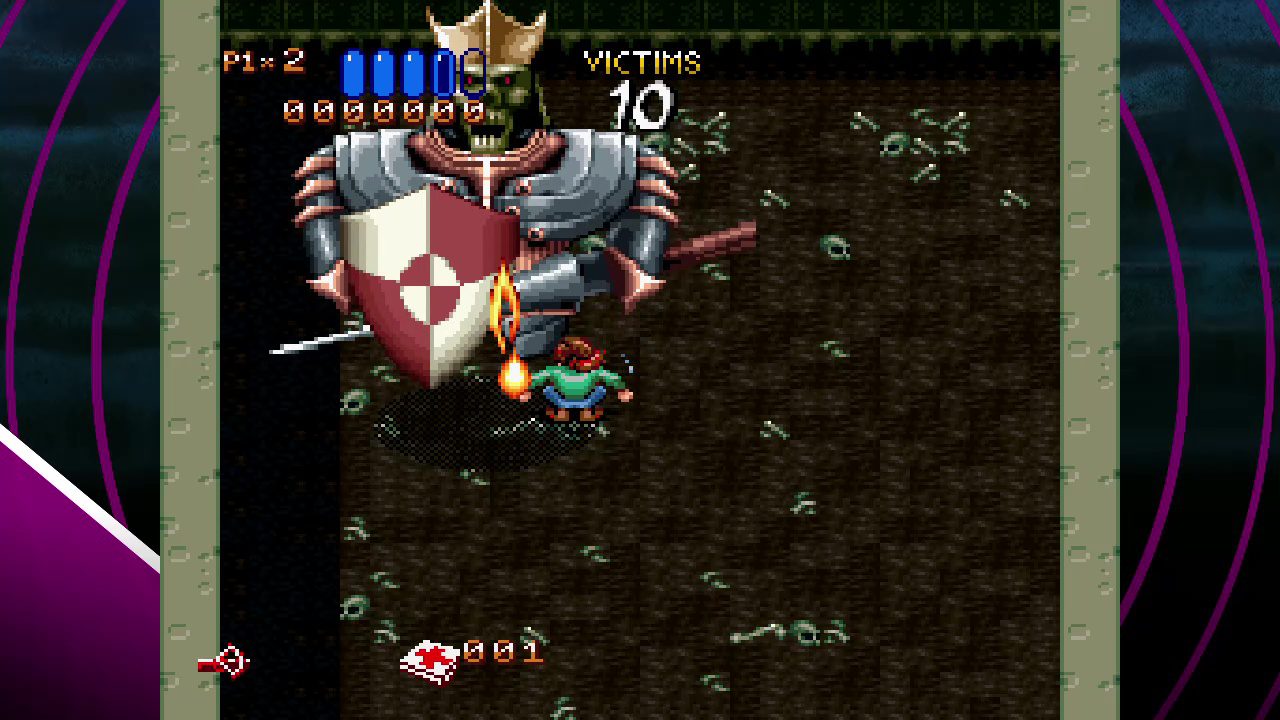 If you’re looking for more good news, you can save your game. You have to “save and quit” for some reason, but it’s not overwritten if you want to continue. There’s also only one save slot, so you can’t have one for solo and another for co-op. Again, it’s kind of half-assed, but it’s there.

You could do worse — there are still two fun games here — but you could do better. I always applaud when old games become more widely available, but I prefer it when they go the extra mile to present a definitive version. This isn’t the definitive version of either game, so I hope you’re happy with just a version.