When I played WarioWare, Inc. nearly 20 years ago, I was stunned. Wario had only had a few starring games at that point, including an ill-fated Virtual Boy release: the fact that he was starring in his own potential series had me grinning like an idiot. What really surprised me the most though is how much I got sucked into this new world and cast. While Mario and Luigi are still king of raking the big bucks in, oddballs like 9-Volt and Ashley are also part of the Nintendo canon. WarioWare: Get It Together! reunites us with that crew yet again, but as usual, your mileage may vary. 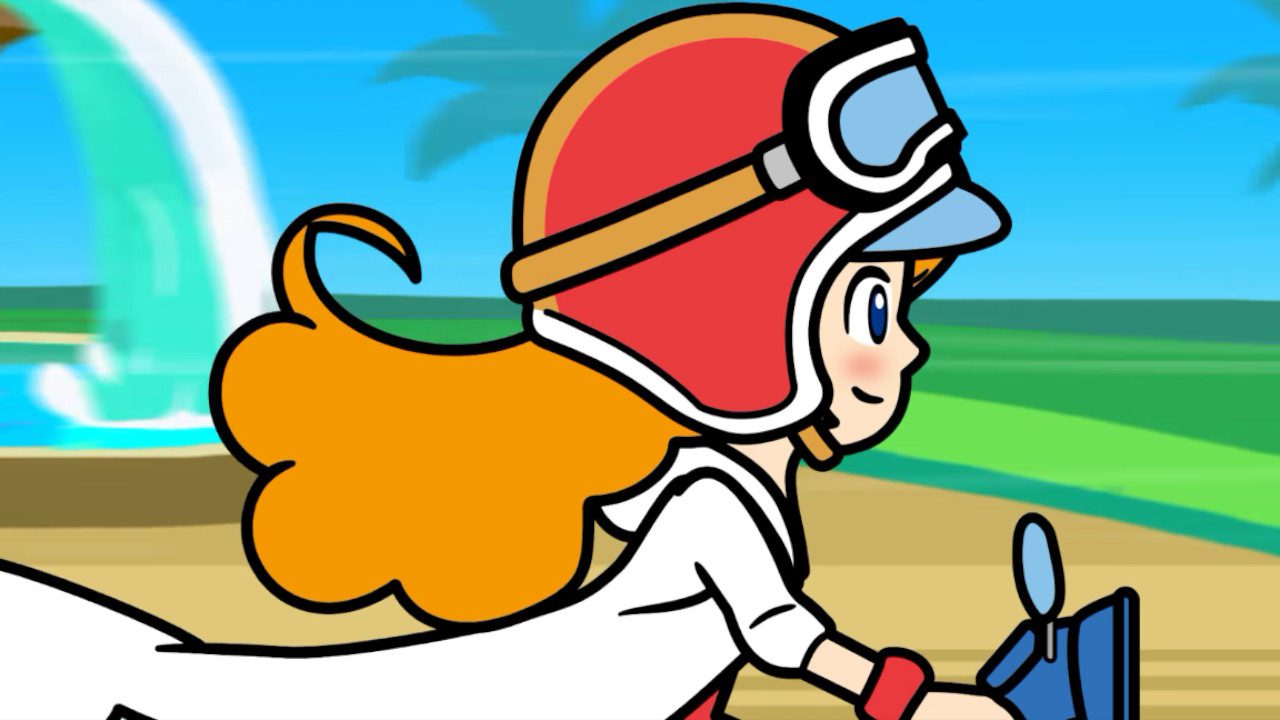 Right after the intro started playing I found myself sucked into the world of WarioWare yet again.

WarioWare: Get It Together! is just as weird as past entries, with vibrant cutscenes that showcase just how much personality this cast has. I was also intrigued by the presentation of it all, as Get it Together only allows you to play the story mode (which features solo or two-player co-op play) at first, Kirby Super Star style. Gradually more modes will unlock (more on those later), on top of extra characters to play as.

And those characters really are the meat of what makes WarioWare: Get It Together! unique compared to its predecessors. Now you’re playing as those people, all of which have slightly different ways of doing things. So imagine a microgame where you need to shoot a basketball into a hoop. Wario can fly on a jetpack and nudge it in. Young Cricket, who controls a lot like a classic Mario character, can run and jump to score a basket. 9-Volt rides on a skateboard that he can’t stop, and can only fire upward vertically. 18-Volt can’t even move, and will need to shoot a projectile to hit the ball.

Each level (which is a series of microgames) asks players to assemble a “crew,” consisting of the new featured character and whomever else you chose (or randoms). I loved this approach because WarioWare: Get It Together! rarely forced me to use options I wasn’t comfortable with for the sake of it; and I ended up forming a crew of “favorites.” As you can imagine, this must have been a pain to program, but it ends up working out. Not every character is equally suited to each task, but there’s a lot of replay value to be had with trying out new characters in different situations.

There are limitations, as a few characters are almost exactly the same. In several cases, this is completely intentional and it does make sense. Dribble and Spitz, who are partners and are acquired at the same time, have similar powers (Dribble flies and can only shoot right, while Spitz does the same, only reversed). But across the entire roster, there are additions that can be replaced entirely; and the only reason you might use a downgrade is because of an emotional connection to that crew member. I really wish more was done to differentiate a few characters, because the raw count is fairly high, but similar to “clones” in Warriors games, that number shrinks a bit in practice.

As usual, the actual microgames range from exceptional to middling at worst. The beauty of the framework of having players only spend a few seconds on each task and having over 200 of them is that if one is a dud, you’ll rarely see it again, and only for a few moments. In this entry, the nature of changing your crew also ensures that some microgames will need to be handled differently from session to session, which I’m sure was a key part of the initial pitch and may have even greenlit the game on its own.

It’s fun while it lasts, but the campaign is very short (under a few hours) and definitely left me wanting more, to the point where I could see why it has a $49.99 price point. More cutscenes, more unique characters, and more ways to facilitate the microgames beyond what the story mode had to offer. Once you’re done, hardcore WarioWare players might like the semi-addicting level-up system. The gist is that you can buy “prezzies” for in-game currency, and gift them to each character (0f which there are many) to unlock more color schemes for them (as well as straight-up outfits), and art. It’s incredibly cute, and I had a lot of fun leveling a few of my favorites up, but never really took to it long term. In the end it feels like a whole lot of busywork, though I admire the team for trying to keep people interested if they want to wring out more content.

Then there’s the Wario Cup solo weekly challenges, which feature a highly complex scoring system that’s actually pretty cool (albeit fleeting, and played during each reset). So that’s pretty much what you get with the campaign mode: two-player co-op (with local wireless for two systems, which I was unable to test with one code), the leveling system, and the ability to replay prior microgames. Beyond that, there’s weekly challenges and “variety pack” party games. 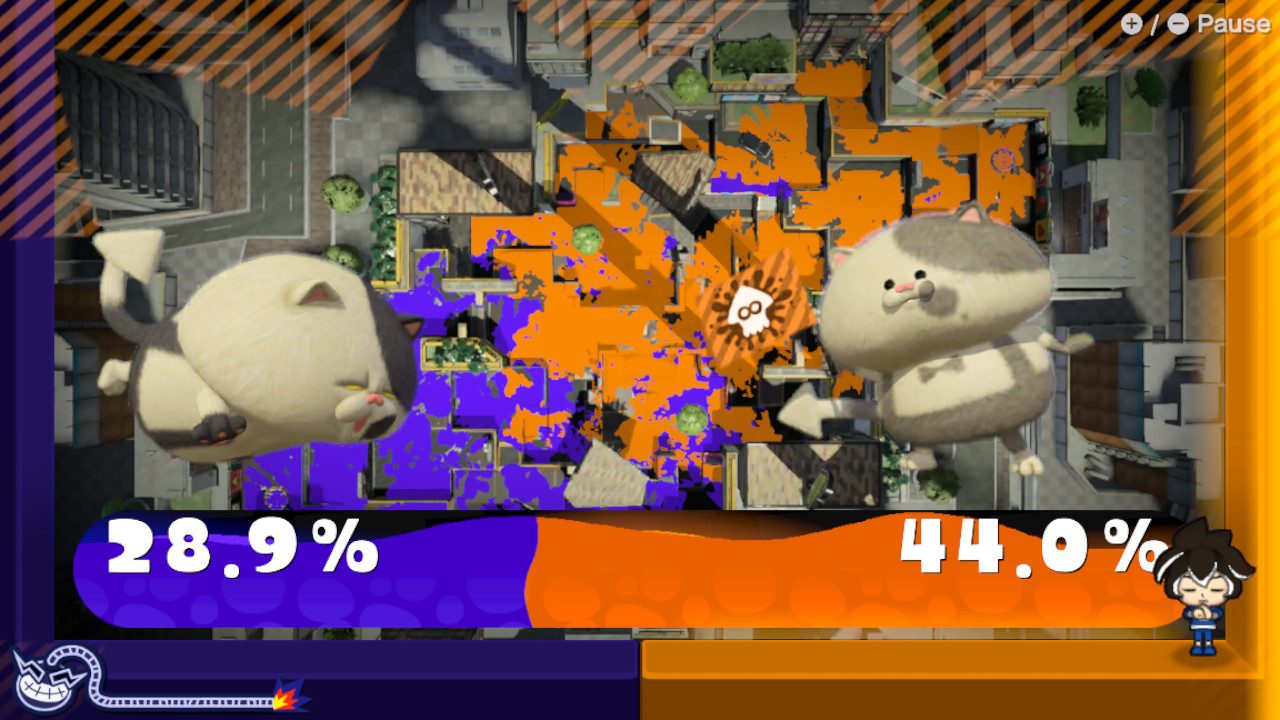 Those party games are really where you’re going to want to hang your hat, and I suggest bringing at least one person along for the ride. While the campaign probably isn’t going to last a ton of people very long, the party modes, specifically versus, could keep everyone entertained for quite a while. Here’s the gist of what’s on offer:

As you can see, the bulk of the variety pack offerings ultimately feed into a battle of who can win more microgames, but at the same time, those games are even more fun with actual stakes at play. Once again versus is the way to go for WarioWare: Get It Together!, and the more the merrier. Duelius Maximus has a special place in my heart because of how competitive it is, including a “lightning” mode that awards each round to the player who finishes a microgame first, down to the second. A lot of the other ones are slower-paced and beat around the bush, but this heads-up mode should sate a lot of competitive players in perpetuity.

Frenemy Frenzy (and to a lesser extent, Friendless Battle) deserves a special mention as well. The term “Smash-like” is really loaded, but in this case, it’s very clear what the team was going for. You can pick from the roster as normal, and each character will sport their base abilities, no strings attached. You crash into each other until someone’s HP is gone, and then they’re eliminated. There’s a few items in play, and several interactive arenas. It’s fun in short bursts, doubly so for the Friendless Battle mode, which can get repetitive after a few sessions. And to be clear, none of it is actually balanced, so don’t expect a Smash replacement anytime soon. Still, as one of many modes (and with a loose AI/bot endless option), it’s a nice bonus.

I’m grateful that another Wario game even exists, and WarioWare: Get It Together! is going to be a hit for a lot of people who are already dedicated to this special brand of weird. But for some, the homogenization of a few aspects might not last them more than a week, so make sure you bring people into the fold if you want to jump in at full asking price.