But we’re in space!?

Out of the games I played this year that had some reasonable budget and were perhaps a bit more conventional, Two Point Campus stands out as a clear favorite. I had expectations going in, and while they weren’t substantially exceeded, they were certainly all met. It was one of the few games that, after writing my review of it, I wanted to delve back into. And I did, before I inevitably had to move my focus elsewhere.

I knew I was going to return to it the second DLC dropped for it, and here it is with Space Academy. I figured it was an eventuality since Two Point Hospital was fortified with extra scenarios. It’s not like Two Point Campus feels limited or barebones, but if you want more Two Point Campus, here it is: in space. Contained within the Space Academy DLC pack is three themed scenarios to paste onto the main campaign. They become unlocked once the more tutorialized of the standard scenarios are completed. The theme this time around is, of course, space, and the progression masterfully takes advantage of this. First, you train astronauts, then you train space heroes, and finally you give education to extraterrestrials. In space.

If your skills have lapsed due to time away from campus, don’t worry; the first mission is relatively simple, and each one after that is more difficult. The biggest obstacle in each one, however, is the rain of space rocks that constantly fall. At first, it’s just a matter of having your janitors clean them up, but then they start bringing in meteor mites that sicken your students. Either way, you need staff devoted to dealing with them.

Aside from that, there isn’t anything tremendously game-changing. It feels like an offshoot of the main game; it’s more Two Point Campus, which is a phrase that I’m probably going to return to a lot. The biggest shake-up that isn’t merely an evolution of existing gameplay facets is the shuttles in the third level. You have to purchase transport ships to shuttle students to space, which puts constraints on how many admissions you can have each year. It’s not huge, but it’s something other than more items, more classes, and more disasters, in space.

Where no student has gone before

At the same time, these are some damned good scenarios. Maybe not as good as the one where you have to sell off all your students to be brainwashed by a cult, but the one that takes place on a meteor let me set up archeology pits, so that’s a win. Plus, after you finish the cult scenario, you can bring the cult with you wherever you go, so you can sell your students out in space.

Additional content comes from new items, clubs, and the fact that you can take the courses you unlock here to other campuses. I kind of wish the courses had something as interesting as cheeseball matches, jousting, or digging holes. Another sport would have definitely added a bit more flavor to things. The new club also just keeps students entertained, which is nice but not revolutionary.

My last gripe is that, if anything new has been added to the radio, I didn’t really notice. Maybe a few songs, but if so, they don’t stand out. I also didn’t notice any new radio DJ segments. I feel like Two Point Hospital kept adding them as the game was updated, but since I love listening to them, I want new ones now. 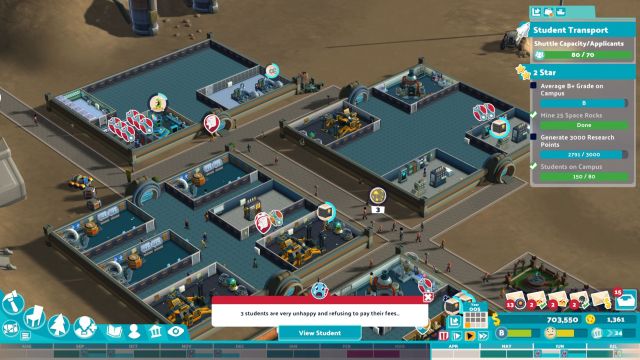 Since my list of hopes for Two Point Campus DLC essentially began and ended with “more Two Point Campus,” I really can’t say I’m in any way dissatisfied. Three missions is a pretty substantial add-on, and nothing about it feels half-measured. As much as there might not be anything revolutionary here, it feels up to snuff next to the game as a whole – a game I already love.

However, if you have already tried Two Point Campus and didn’t enjoy it, or maybe are just burnt out on the core product, then Space Academy doesn’t have anything that will really change your mind or reignite your interest. On the other hand, if you just want to cram some more Two Point Campus in your gob, Space Academy is more to stuff yourself with. In space.