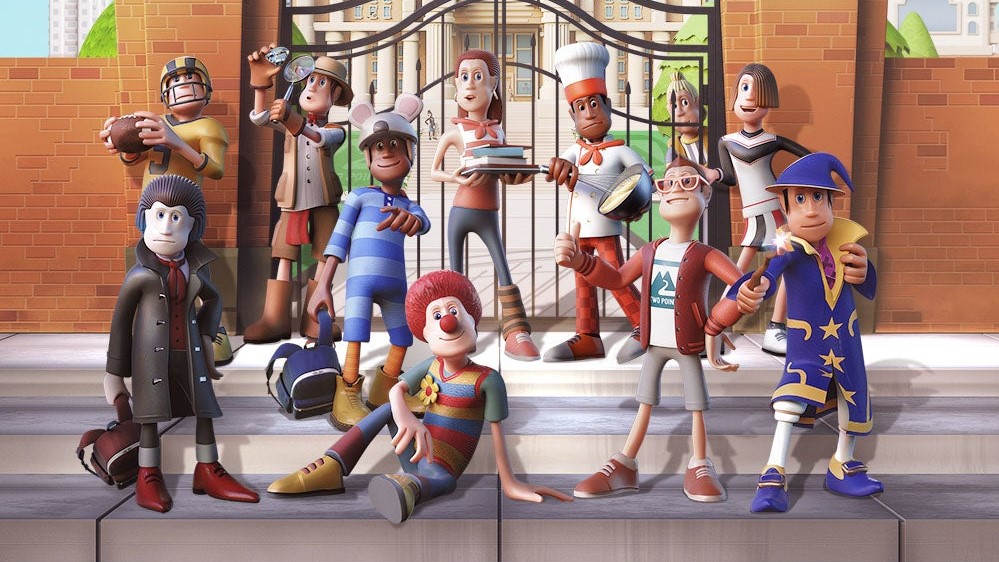 Education gives you a bright future, then clouds it with debt

The Two Point County Cinematic Universe (TPCCU) excites me. Two Point Studios launched Two Point Hospital with the intent of building a landscape where all their future games would happen. Two Point Campus is the next step. It’s not a sequel, but the aesthetics, the characters, and even the UI call back to their first title. It reminds me of Maxis in the ‘90s before and directly after EA got their evil all over them. A lot of the games sprung up around SimCity, and while not all of them were as directly related as the ones from Two Point Studios, some were tied together, even if it was just in a reference.

As the name implies, Two Point Campus has you building your own post-secondary education dispensary. And building it again. Then again. Twelve times in all. Your job is to meet a series of goals that may or may not relate to the well-being of your students and their futures. Once you accomplish all the goals on a given map, you’re off to the next one.

Even if the goals are different and the games play in considerably unique ways, the framework of Two Point Campus mirrors Two Point Hospital. Each of its levels gives you a new challenge to overcome. Sometimes you’re simply trying to win the national sportsball championship. Other times you’re digging in the earth for the priceless and irreplaceable artifacts of humanity’s past and selling them. Each stage has a similar flow, but things are shaken up enough to keep things from growing moss.

The most toilet-y city in the county

Generally, you start your school with a small handful of cash to get it off the ground. You need to focus on simply getting a course started; amenities like somewhere to pee can come once you’re established and making money.

The first year doesn’t require much: a lecture theatre, a practical testing spot, and a teacher. A library if you don’t want everyone to fail. Each additional year ramps up what you need, so keep money put away or prepare to take a loan. You’re walked through the process a few times before you need to figure it out on your own, but it’s still easy to be a little over-ambitious with your spending.

After you start making money, you need to decide whether to add additional courses or simply expand the ones you have. You don’t necessarily need to offer a multitude of courses, but you can. Some of them use the same facilities, so if you pick them right, you don’t need to bloat up your campus. You can also play with individual aspects of courses. Don’t want a lot of students but still want to charge them an arm and a leg. That’s the dream, friend, and you can do it in Two Point Campus.

Most stages offer new courses to try out. There’s a Hogwarts-inspired magic school, a chivalrous castle campus, and even a clandestine spy factory. Once you’ve unlocked a course on another campus, you can use them on any campus. My favorite was archeology since students dig huge pits and uncover treasure. I liked putting pits where they don’t belong, like beside a pool or in a park. Two Point Campus gave no judgment. At least someone appreciates my chaos.

Some of the same problems that were in Two Point Hospital are carried over here. One of the biggest issues I had was rebuilding each time is somewhat repetitive. The trickle of additional courses adds a bit more variety to the experience than the new diseases did in Two Point Hospital, but eventually, it becomes abrasive. To their credit, additions made to Two Point Hospital after release to alleviate the issue — such as being able to copy rooms or save them as templates — have made their way over to Two Point Campus. However, for some people, this will be the breaking point. For others, it won’t be an issue at all.

One big change in Two Point Campus’ features is the ability to construct the outer shells of buildings. In Two Point Hospital, you bought a lot, and it would plop down a pre-constructed building for you to organize your rooms in. For Two Point Campus, you can build them however you like. For me, it’s rectangles. All of them; rectangles. It’s the most efficient shape, and you don’t have to think much about how you organize your rooms. I’m not playing Two Point Architect here, so bite me.

It helps that I love the humor featured in the Two Point series. It depicts a world where absolutely everyone is as daft as sponge cake. It’s likely that you’ll most commonly view the game from up high in the seat of God, but when you zoom in, there’s usually someone making themselves look ridiculous. Considering the number of interactions in the game, the amount of animation has to be dizzying, and it makes everything feel full of life.

The radio DJs are back. I hope I’m not the only one who found them hilarious. They’re small breaks between music tracks where a fictional radio personality goes through a short skit or anecdote. All the ones present in Two Point Hospital return, as well as a couple of college radio hosts. Harrison Wolff is still my favorite, though I didn’t hear a skit with him that equals the one from the previous game where he gets locked in the recording studio. Still, there were quite a few instances where I laughed to myself, alone, in my “office.” Honestly, I could probably just have fun listening to the hosts.

Moving to the county, gonna eat a lotta pizzas

Here’s the deal: if you didn’t like Two Point Hospital, chances are low that Two Point Campus will click with you. While the subject matter is completely different, the flow of the game has changed, and some improvements have been made, it’s similar enough that it carries all the same possible points of friction.

On the other hand, if you did dig Two Point Hospital, then you’ll find everything you loved about it here on campus. I’d say I even prefer it to the previous title, if only because I enjoy the subject matter a bit more.

If you haven’t visited Two Point County before, then Two Point Campus is a perfect starting point. There’s absolutely no requirement that you played the previous game in the series to enjoy this one. However, if you’re already accustomed to the interface and overall mechanics, this will be a comfortable temperature to slide into.

For me, I couldn’t be happier. Well, I could. A university may be a different ballgame than a hospital, but it’s not a very shocking twist. I’d love to see Two Point County zoomed into something small like a restaurant or sports team, or zoomed out to a city or, well, county. But Two Point Campus is a wonderful return to the universe, and I’ll happily — perhaps impatiently — be waiting for the next chance to visit.