It seems like every time I tell myself I’ve had my fill when it comes to zombies, something comes along to make me reassess my interest. It happened with Dead Snow, and it happened with Robert Kirkman’s The Walking dead. So I guess it shouldn’t surprise me that an adventure game series inspired by the comics would get my attention.

The Walking Dead is just the latest franchise to get the adventure treatment from Telltale Games. The studio has dabbled with several IPs from TV and cinema, to mixed effect. The much lauded comic series has already spawned a television show filled with all the talking and pensive staring you could want. Instead of treading over the same ground, Telltale is spinning a different yarn, while still ensuring it remains connected to the source material by including some of the same locations and characters. 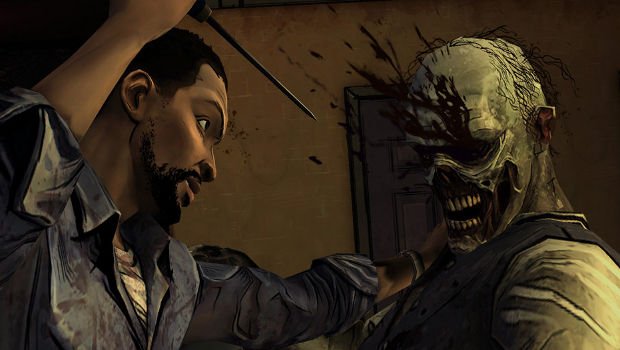 The Walking Dead tells the story of Lee Everett, a convicted felon with a penchant for getting knocked over. Even before he’s attacked by zombies, he’s not doing so well. Locked up in the back of a police car, on his way to prison, things are looking bad. In a conversation with the police officer you learn a little bit about Mr. Everett and his crime. There’s a simple — usually timed — conversation tree that pops up, but it’s not used to select every line he utters. Since there’s a lot of talking, this helps with the flow a great deal. He’s not really the most verbose fellow, so every dialogue choice offers you some delightfully enigmatic ellipses for those awkward silence moments.

Unsurprisingly, the already unfortunate situation Lee finds himself in rapidly gets worse. The police car he’s stuck in gets in a bit of a collision — a zombie collision. Lee awakes to find himself a bit worse for wear, but in one piece. The same cannot be said for the cop. After escaping the wreck, he limps over to check on the dead cop to find that Officer Chatty isn’t quite resting in peace. A shotgun shell to the face fixes that. It’s an appropriately gory game and Lee’s reaction to death is believable throughout.

The zombies are nowhere near as detailed or horrific as they appear in the show, but they are still appropriately disgusting rotten hunks of flesh. The Walking Dead pushes Telltale’s engine to its limits. The result is their best looking game to date with a distinctive comic book aesthetic, but animations are jerky and not just with the zombies. There are a few graphical glitches too, but nothing on par with the unfortunate sound problems. The game is riddled with pops in dialogue, a few missing lines and there were even a few occasions where a character would say something entirely indecipherable. 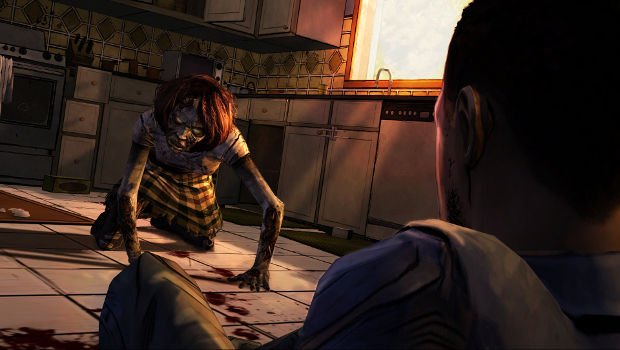 After two near death experiences, Lee makes his way to a suburban neighbourhood where he rescues/is rescued by Clementine, a wee girl who has been surviving on her own for a few days. Shackling a protagonist with a helpless child could have gone badly, but thankfully she’s neither helpless nor does she become annoying. Your responsibility for Clementine is laid on pretty thick, but it works. The game isn’t so much about just surviving, it’s about looking after your ward, as well. This only gets more complicated when you join another group of survivors.

The relationships you develop in this zombie apocalypse have an impact on how the story plays out. Characters will remember how you reacted in certain situations and if you’re a shifty bastard or an open book. As the desperate survivors get more agitated and concerned, Lee is frequently caught in the middle. It’s impossible to make everyone happy, someone is always going to get pissed off and that might come back to bite you in the arse, as it certainly did once or twice in the first episode. He’s also thrust into a lot of situations where you must decide who lives or dies and it’s never pleasant. When your decisions count the most, you have the least amount of time to make your mind up. It can be an agonizing situation to be in, but the guilt is just something you need to deal with.

Lee’s a pretty likeable fellow, though you can certainly make him slightly less charming if you feel like it. Unlike Rick Grimes in the comics and TV show, he’s not a leader (or at least not yet) and he has a past that he’d like to keep under wraps. How forthcoming he is about his history is one of the major plot points of the episode, and will likely continue to be so. Honesty is great and all, but telling people you are an escaped criminal is probably a quick way to end any trust. Not telling them can be a bit tricky too. It’s a bit like walking a tightrope. Playing the outsider that people aren’t too sure about is a great starting point and leaves a lot of room for relationships to grow and change. It’s certainly a different dynamic from playing the hero. That isn’t to say that Lee isn’t capable of selflessness or brave acts; he doesn’t shy away from taking action. 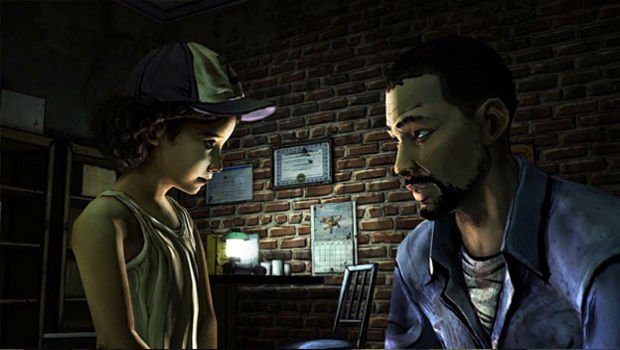 Action sequences crop up quite frequently, but not so much that the tension is broken. These sequences take the form of simple QTEs but also try to mix things up a bit by making you aim or offering you a few choices. It still feels quite hands off, but it’s more interactive and tactile than I anticipated. These sequences are actually quite thrilling and always feel desperate. The toll they take on the characters is obvious and makes every fight more perilous, even if they are really relatively easy. Since firearms draw unwanted attention, hammers, axes and other tools take centre stage. The violence is up close and personal and clearly draining, both physically and emotionally. There are a couple of prolonged “execution” scenes and they are fairly awful to behold. There’s nothing glamorous or even necessarily exciting about them, they are just tragic. They go a long way to putting you in Lee’s mindset.

During less frantic moments the game switches to a more traditional point and click model. It’s a welcome change of pace and functions as you would expect. During these moments you can further develop your relationships with your group and find solutions to incredibly simple puzzles. There are so few objects in the adventure that it’s usually obvious what you need to do. Oddly enough, that’s not really a criticism. The puzzles are more like short term goals for you to focus on between dealing with your increasingly stressed comrades.

This isn’t a game with any brain teasers, it’s one where you deal with trust, fear and responsibility. In some ways it reminds me of 2002’s The Thing videogame, though the trust and fear was more tied to the environment and reactions to death in that title. There is one “puzzle” that stands out as something of an anomaly. One of your fellow survivors, a woman who until then seemed perfectly intelligent, and continues to be so after the puzzle, seemingly has no clue how to operate a battery powered radio. In fact, she didn’t even know how to look for batteries. Utterly baffling. 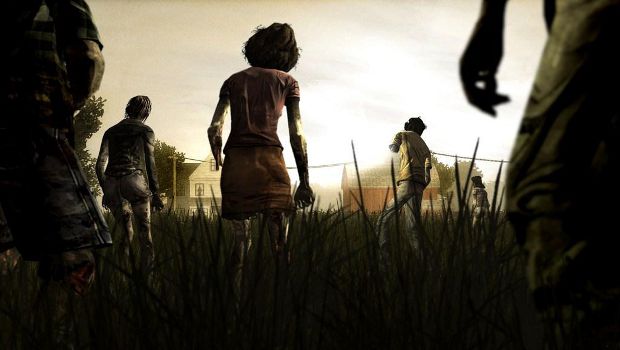 The story doesn’t break any new ground, but it captures what makes Kirkman’s work so compelling and Romero’s before him: Human drama amidst horror and death. The shocking situation means that we get to see a lot from the characters in a short space of time, their strengths and their vices, the things they regret and the way they cope with the insanity they find themselves in. Sometimes conversations can be a bit stilted or go on for too long, but something usually comes along to speed up the pacing. Notably, hungry zombies.

Despite being an adventure game, the control scheme favors gamepads over a mouse and keyboard. Telltale have made great strides to bring the console market more adventure games, which is wonderful, but in this instance it led to the product feeling more like a console port when played on the PC. Regardless, it’s simple to switch over to a gamepad if you have one, and that clears up any control issues.

To make the game more challenging, Telltale added a second gameplay mode which removes the UI and things like prompts and signposting. It gives the game a more cinematic feel and means you’re less sure of what characters think of Lee, since the other mode notifies you if an NPC believes a lie you’ve told or appreciates something you did. It doesn’t make the experience all that difficult, but not being able to take a peek behind the curtain does make it feel more organic and surprising.

The Walking Dead: A New Day was an excellent start to the series. Despite introducing so many characters in a short space of time, Telltale has managed to plant the seeds of emotional connection; which I can only hope leads to more intense drama and difficult decisions. Its limited opportunities for interaction is probably its biggest failing beyond the bugs, but there’s a lot of potential here. I’m genuinely excited about the second episode and since I suppose this is a “pilot” of sorts, that’s a major point in its corner. It certainly more than makes up for Jurassic Park.