The Journey Down was a classic-style, 2D pixel art adventure game which you can still play for free. Now it’s a slightly larger, fully voiced, gorgeous adventure game that mixes 3D animated models with painted backgrounds. The result is a visual treat. It’s a bit unusual to see a remake of a series that only had one episode, but this new direction is a very welcome one.

Inventory puzzles, minor theft, and mischief will make any adventure game fan feel right at home, while the use of macabre masks and black African themes and characters make it feel fresh. It’s certainly an uncommon setting. 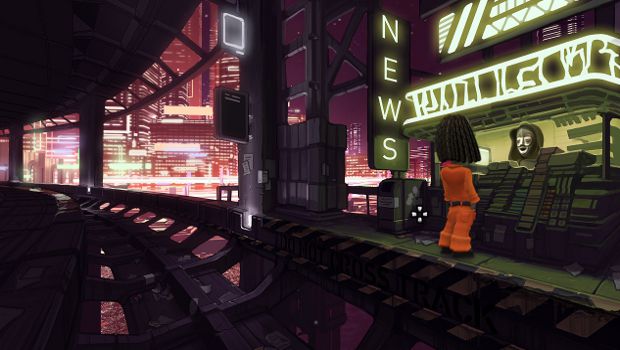 Bwana is a good-natured, laid back pilot and petrol station owner who is scared of heights. Living in one of many bays of the shining, yet corrupt, city of St. Armando with his best friend and engineer, Kito, he has an uncomplicated life. Unfortunately for him it seems like the universe was just saving up, and in the space of one evening it dumps a whole heap of complications on him and his short friend.

Journey Down’s tale of a city gripped by corruption, one essentially being run by a single corporation, is a compelling one. Bwana finds himself in the middle of a huge cover-up, where the ominous Armando Company has made everyone believe that the mysterious “Underland” is a deadly and dangerous place and that even looking over “The Edge” is now completely illegal. He’s chartered to take the somewhat haughty academic, Lina, over The Edge to find out what the heck is going on. But first he has to fix his decayed plane, the one he hasn’t flown since he was a child.

The high-stakes mystery looms over the adventure, which in contrast is simple, fun, and lighthearted. Bwana is a wonderful protagonist and I found it impossible not to smile constantly at his cheeky comments and often oblivious nature. He’s that great mix of almost relaxed enough to be considered lazy, but also rather ingenious. He’s quickly become one of my favorite adventure game “heroes” in a very long time. 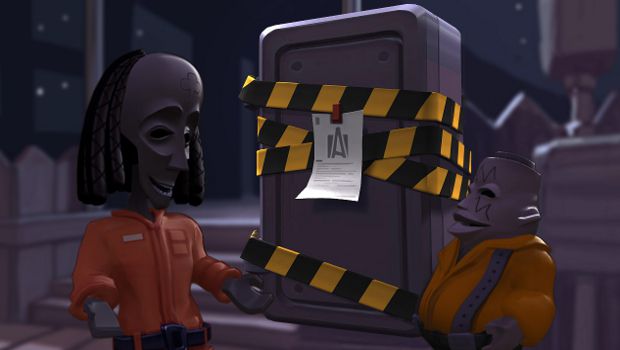 Unfortunately there are a couple of occasions where he’s used to criticize the sort of obtuse puzzles that many adventure games are known for, it’s not subtle and it’s a bit silly when he then has to actually solve said obtuse puzzle. These puzzles are stupid, so go solve one. Really? There is one instance where this did elicit a chuckle from me, however. When Bwana gets frustrated and pretty much gives up trying to solve it, only to solve it in his anger. That, at least, was clever.

Thankfully, most of the puzzles are actually great. Not difficult, not even challenging, but great. Sometimes I like to moan about how puzzles in adventure games have been killed off by the dying attention spans of the audience. Skygoblin’s solution has been to make them short, sweet, and most importantly — funny. There’s always a pay-off, be it a visual gag, a joke, or the satisfaction of outsmarting an annoying French fellow. All of them feel connected to the slightly goofy logic of the game world. There’s a wee bit of backtracking, but the game is limited to only a handful of scenes, so it feels more like getting the most out of a location rather than lazy design.

Accompanying Bwana on this short adventure is a truly excellent soundtrack. Simon De Souza’s smooth jazz reggae kept me gently bouncing in my seat, relaxed to the point where I almost slide off it. There’s variety though, too. The tracks match the atmosphere perfectly. Those of you who picked the game up before Skygoblin wised up and slashed the price — the original one was absurdly high for one episode of who knows how many — can get the soundtrack for free. Lucky devils. 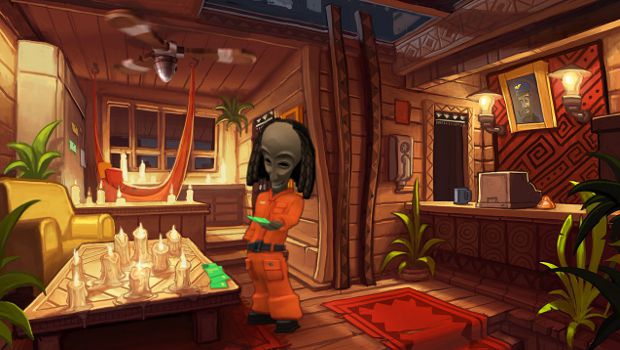 Unfortunately, your ears will not be as delighted by the voice acting. Anthony Sardinha and David Dixon do a superb job voicing Bwana and Kito respectively, but that’s where it ends. The rest of the cast run the gamut from forgettable to pretty bad, with a couple being horrible racial cliches; notably the French doorman and Japanese chef. Making matters worse, the recording quality is all over the place. In one conversation the quality can change multiple times, and it’s impossible not to notice this. It’s simply not very professional and mars an otherwise polished experience.

I’m not just throwing the word polished around, either. The last things I expected to see in Over the Edge were cut scenes, but there are quite a few, and they look fine. And by fine I mean fine, not merely alright. Feel free to add an extra “i” or two in your mind. The 3D models are simple, but effective, and the cut scenes add a lot of extra life to the proceedings.

With the price now more reasonable, I feel very comfortable telling you to buy this game immediately. The gameplay is pretty traditional, but the setting, music, and lovable characters keep things from being tired. Yeah, another great adventure game. Of course, the genre’s been dead since the late ’90s, so this is all a fever dream.

It’s also worth noting that Over the Edge is part of an indie bundle right now. iOS and Android versions are being tinkered with too.