I think I may be autistic. Or something. But, I’m not alone in having this thought. Paranoid self-diagnosing is a habit that our ADHD generation can’t kick any sooner than the meds we’re on. Very few of us go through life in complete control of our emotions and in complete understanding of others. It’s called communication and it’s a tricky thing.

After playing The Act, I think I now know what it feels like to be truly out of touch with your emotions and everyone surrounding you. It’s a frustrating and confusing state to exist within.

Here’s the kicker: I don’t think this is the experience that the developers were trying to make at all.

The Act was never meant to be an iOS game. Like a lot of games, The Act was released on the platform as a last resort. Unlike a lot of games, this choice was made after a decade of development for arcades. You can read the full story at Polygon, but I’ll give you the important details in a shotgun blast of information: Disney animators, arcade knob controller, emotions, and Dan Aykroyd. Chicken fingers. They’re delicious. Got that all?

Try as the developer might, The Act can’t escape from comparisons to Dragon’s Lair, Space Ace, and other Laserdisc-based, animation-heavy QTE games (hyphens!). Like those games, The Act features cel animation from Disney animators and looks stunning. It also only lasts 30 minutes and you’ll spend most of that amount of time either watching a scene play out or cursing at your iPhone/iPad. 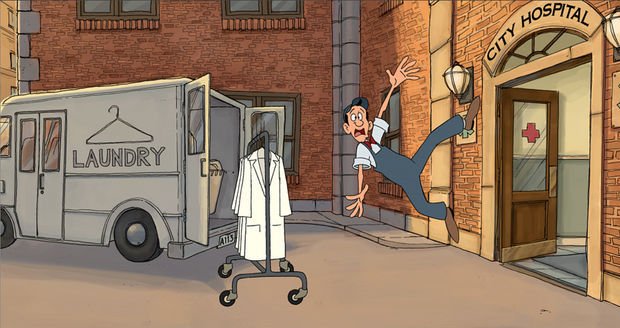 Being a game developed two decades after Dragon’s Lair, The Act brings something new to the genre: a knob. Well, what used to be a knob. The game in its original, abandoned arcade form
was controlled with a knob. You literally dialed into the right emotion that will help you connect with your surroundings and progress the story. It’s not as hippy-dippy as it sounds. Being a knobless-platform, the iOS version transforms the turning of a knob into a graceful finger swipe. Slowly swipe left, strongly swipe right, etc. It works surprisingly well most of the time.

The Act is a love story that follows a dopey window washer who falls for a nurse at a nearby hospital. When he isn’t daydreaming about his own Casablanca romance, he’s saving his narcoleptic friend from falling off a skyscraper. The Act is full of great characters that are full of personality without speaking a single word. That’s right: The Act is free of dialogue. Instead, the story comes to life through the superb animation and moving score. It’s really a class act that leaves you feeling good — good enough to forget and forgive most of the game’s frustrating scenarios.

The different scenarios the male lead gets himself into are almost always bizarre, comical, and bittersweet. The game doesn’t start on a strong foot, unfortunately. The first scenario finds the lead daydreaming about the nurse. He’s dressed in a tux and ready to show some boldness to win her over. This boldness is applied through your touch, swiping left or right with nuance. You either hang tight and look like a chump or move in closer, slyly — but not too quick or you’ll look desperate! This information is something you can only get by playing these scenarios, often time and time again. It’s very frustrating to play a game where you have to initially fail in order to win. 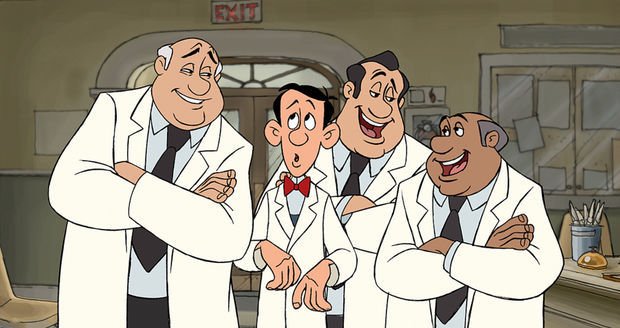 There are occasions when The Act’s control scheme makes sense in the context of a scenario. When you see your boss choking, when you need to mimic your love interest, or when you only have one direction to swipe, the controls come naturally. The game is at its worst when it relies on the player to display specific emotions in reaction to others. First, you’ll need to find out exactly what the other parties are feeling. Then, you need to find out what emotions you have in your arsenal and how you apply them (left or right by how much?). Continually failing these challenges made my blood boil, especially when I knew what I had to do but I just didn’t know how to do it.

The Act is kind enough to supply the player with infinite continues, but it doesn’t make the jerky stop-and-start of the story and animation any smoother. For a game about properly communicating your emotions in order to find success, the developer did a poor job of conveying its own desires to the player. The Act is a rough relationship that woos with visual charm, connects through some fantastic, emotional moments, but leaves the player a bit high and dry, in the end. There might not be another game like it, but there are better fish in the sea out there, even for a romantic gamer.