When death comes in Teleglitch, I can feel a part of myself being replaced with a weighted ton of soulcrushing loss and hopelessness. So goes the roguelike, a genre that has increasingly proliferated among bedroom developers (Spelunky, FTL), major studios (Dark Souls, ZombiU), and sadomasochistics.

A good roguelike is a balancing act of keeping levels, item placement, and enemy encounters random without making an unfair, lame game. Teleglitch will be beat you down, drag you across the floor, rip you open, and paint the walls with your entrails but I never felt like walking away from it altogether. Each victory, big and small, is a memorable one in Teleglitch that lingers long enough to give courage to continue — and it’s almost always worth it. 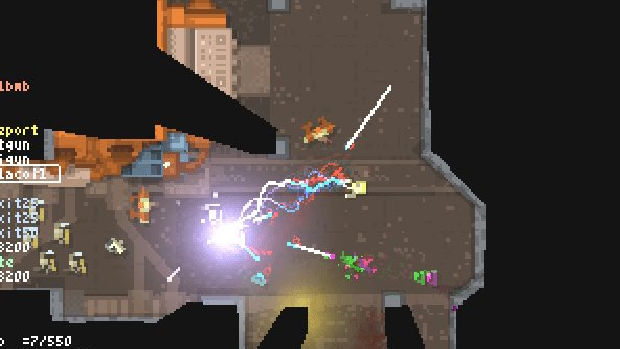 Elevator pitch time! Teleglitch is the combat of Hotline Miami and Alien Breed meets the aesthetics of Quake meets the story of System Shock meets an RPG roguelike where you explore randomly generated dungeons, collect items, and craft new gear. Believe it or not, this is selling it short.

Teleglitch opens with with an image of a planet along with introductory text — it’s not the only connection the game has to Doom and Quake. You are a space marine investigating a isolated human colony on a remote planet. It’s typical sci-fi material but the text in between levels and terminal messages are well written, adding to the game’s grim atmosphere. The subtle audio cues, shrilling enemy noises, and abstract visuals help distance Teleglitch from other games that have occupied similar ground.

The beginning tutorial does a good job of explaining the game’s basic mechanics: You fire weapons, manage inventory, combine items, and flip switches. Alien Breed fans will find themselves right at home with the game’s excellent controls, but Teleglitch holds a wealth of strategic decisions that only dedicated players will discover through repeat playthroughs. Teleglitch’s roguelike influences become immediately apparent when you play the same level for a second time, finding items, rooms, and enemies in completely different places. Teleglitch manages to make procedurally generated level design work without sacrificing good flow. Like Spelunky, sometimes you’ll stumble into something awful (an enemy hive in a small room) and sometimes you’ll get lucky (three medkits in the start area).

You need to depend on more than luck to get past even level two, however, so memorizing what items you need to combine to make a better weapon becomes important. This might sound complicated but the game’s barebones UI makes it a cinch by highlighting all possible upgrades currently available. Through combining items, you can turn a pistol into an automatic firearm, build armor out of empty cans, and create robotic legs that will make increase speed. Though there are no stats to build, the forward progress through items and level progression makes Teleglitch a very addicting game. 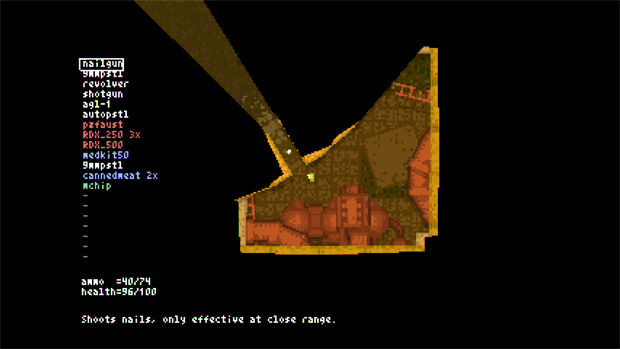 From firing a laser to stabbing a dude in the face, Teleglitch plays great with a mouse and keyboard. A controller option would be a welcome addition and hopefully one that makes it into a future Steam release. Teleglitch’s enemies don’t make anything easy for you. They move around like raving maniacs — which I suppose they are — but I never got used to their movement patterns. Even when I had full health and armor (a miraculous occurrence), I never felt safe in Teleglitch. When you hear the boss in level 6 scream, you will know true fear. The game also does a brilliant thing in placing pipes throughout levels, with only a couple serving as a spawn point for a ton of enemies. So, whenever I saw one, I felt my grip tighten as I slowly crept forward. I’ll never look at pipes in Super Mario Bros. the same way again.

Teleglitch feels great, has a unique lo-fi aesthetic, and is packed with brilliant ideas, but some technical issues bog it down. I came across at least one game-breaking bug (a boss encounter in level 5 locks you into a room, but if you don’t enter quick enough you’ll be locked out) and never got some of the control options to work (the grenade and stab buttons). Teleglitch doesn’t allow players to quit and save progress. That’s okay in Spelunky, where levels are brief, but I once lost two hours of progress in Teleglitch because of this. Asking players to sit and play without pause is a bit much. But, these are small issues that are easy to look past in light of all that Teleglitch has to offer.

Along with FTL and Spelunky, Teleglitch takes the core elements of a roguelike, does away with tradition, and creates a hybrid of a game unlike any I’ve played before. If you are a fan of horror, top-down shooters, and RPGs, Teleglitch won’t disappoint. However, you will likely disappoint yourself when you play it.

[Teleglitch is currently only available at the developer’s website.]