Fire in the sky

Flying is great. Fighting while flying is pretty great, too, but for some reason, dogfighting in good ol’ atmosphere hasn’t caught on as quickly as dogfighting in space. Despite the resurgence of space games brought on by the rise of crowdfunding and indie development, “sky-shooters” outside the niche simulation market remain in somewhat short supply.

Strike Vector is the kind of game that aims to scratch that itch, and several more besides. Heck, the fact that it says “Brutal Aerial FPS” right on the figurative box is an apt descriptor for what developer Ragequit Corporation is attempting to do.

The only question is if they’ve enough thrust to send their little game soaring. 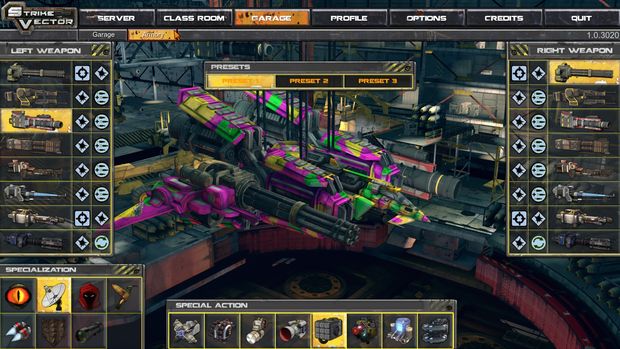 First off, even calling Strike Vector a “Brutal Aerial FPS” is underselling it a bit. Sure, it’s definitely brutal, and aerial, but merely labeling it an “FPS” brings to the contemporary gamer mind something more like Call of Duty. But those types of ground-bound shooters, their souls weighed down by gravity, can’t deal with the kind of sensation Ragequit’s game provides.

Your first, exhilarating, terrifying moments in a Strike Vector multiplayer match (and there are only multiplayer matches) are more likely to call to mind a bizarre fusion of Descent‘s omni-directional movement and the blistering speed of mecha anime like Macross or Robotech.

First, you’ll join any given match by selecting a pair of weapons (from a total of eight), then picking a pair of perks for them, grabbing a special ability that wasn’t elaborated on at all in the nine static instructional slides that make up the new-player tutorial, then finally hammering the big red button on the garage screen marked “LAUNCH.” 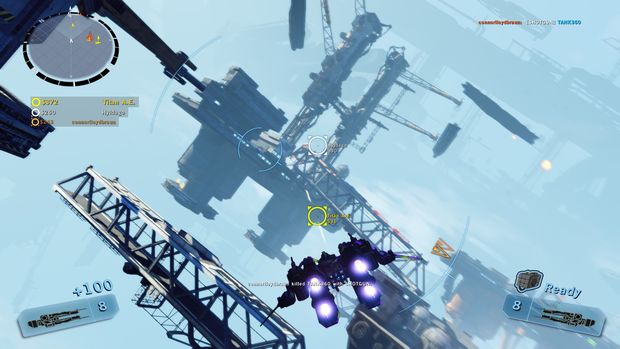 All of a sudden, you’re screaming out of an endless sky on a jet of afterburner flame, aimed at the nearest bit of grimy, improbably-hovering level scenery. You’ll just barely avoid it by kicking in your plane’s — excuse me, your Vector’s — hover mode, allowing you to aim and shoot from a stable vantage.

And then a more experienced pilot blows you up, and you end up crashing into that scenery you just avoided anyway, except this time you’re on fire.

That’s the meat-grinder cycle of a typical Strike Vector session, for while Ragequit has succeeded at conveying a splendid sense of speed and motion, they’ve married it to a multiplayer-only game whose skill ceiling seems at times to bump shoulders with the likes of Quake III Arena, demanding precision, skill, and affording little forgiveness.

You’ll likely finish your first few matches in the negative scores, as crashes count against you. You’ll try to recall both the shooter and flight-game skill sets that you’ve let molder in the days since guns with iron sights took over the FPS market. You’ll find out what all those extra abilities actually do by using them, being killed for using them wrong, then trying something else. 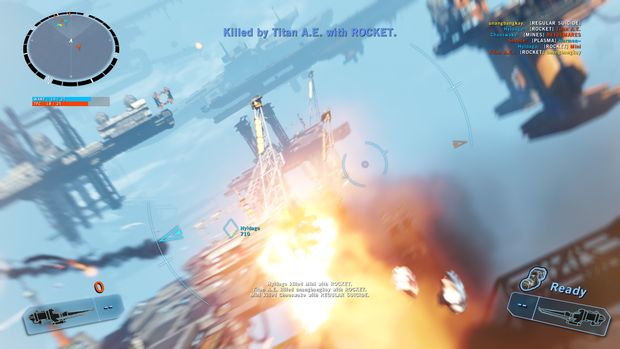 Strike Vector is refreshing in its old-school sensibility, though it’s clear that its lack of hand-holding will drive off some players unused to classic shooters, as well as those who came in hoping for more of a simulation-style game than an action shooter. Or those hoping for a single-player campaign, or at least AI bots. Or those hoping a game whose level-up progression unlocks are more useful than Vector skins (that are difficult to see in actual play) and concept art. Or even just a title with less demanding latency requirements. Even playing on the nearest available servers, a ping of greater than 100ms seemed like a ticket to the bottom of the scoreboard.

Still, there’s a lot to love about it if that’s an itch you’ve been looking to get scratched. The collection of weapons and mods for each makes for a small, yet distinct experience no matter the combination. Even novices can score a couple of newbie kills with the game’s two flavors of homing missile. The variety, as well as the exotic qualities of the special abilities lends an interesting optimization and style component to a weapon selection that might otherwise seem limited, compared to the endless stream of samey guns you might find in a contemporary military shooter.

Available game modes cover the essentials of competitive shooting, with team deathmatch, free-for-all, and a King-of-the-Hill-esque mode that increases the score value and visibility of the top players, making them attractive for all. Purchasers of the game gain all future DLC content for free, and the first pack was released just recently, adding Capture-the-Flag and more maps. 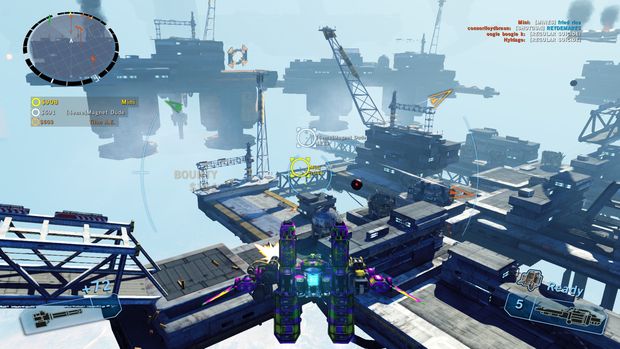 Serving three masters as it does, Strike Vector might not have a whole lot of mass-market appeal, but what it lacks in that field, it more than makes up for by being a gorgeous, intensely competitive experience that matches its aesthetic appeal with pure shooter satisfaction. If you happen to be looking for that, Ragequit’s new baby might send you soaring.