The Force is strong with this one

It’s been a couple years since Zen Studios first took on the Marvel license and subsequently released expertly crafted tables centered around the biggest characters and story arcs in the comic book giant’s vast library. Each table outdid the last, and it seemed like there was no way they could do any better with the next tables. Then they did.

After fifteen tables and no signs of slowing down, the studio has done a brilliant job with the Marvel license, so what would the next logical step be for the masterminds at Zen? Well, Star Wars Pinball, of course. 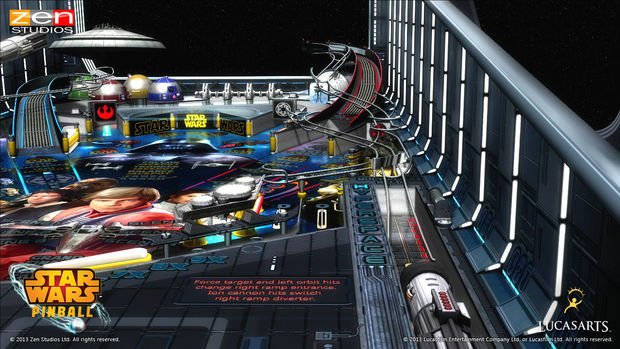 At first glance, The Empire Strikes Back looks empty. There’s a few lanes on the sides, a couple of ramps, and a big, flat platform in the center of the table that takes up most of the real estate. The player doesn’t know it yet, but that giant, empty platform is where all the action is going to happen. Once the player hits two barricades (“Star” and “Wars”) in the dead center of the table, a flap opens up right above the flippers that, when the ball is locked inside of it, starts the player’s choice of one of five Empire Strikes Back scenes (this table’s version of missions).

Depending on their choice, various 3D models will appear on the platform and finally bring some life to the table. The coolest example has an AT-AT walking across the platform where the player needs to help the snowspeeder bring it down. Each mission has two parts, and should time run out (or some other misfortune occurs), a checkpoint is created at the start of the second part of the mission. This a new and, believe me, entirely welcome addition for aspiring pinball wizards such as myself.

Empire also introduces a new mini-game that actually takes you completely out of the table and into a first-person mode where you control Luke Skywalker himself. There’s what I like to call a micro-loop behind those “Star Wars” barricades mentioned earlier; going through it enough times to spell “Training” and locking the ball in the center slot starts up the mini-game. Featuring the scene from A New Hope where Luke learns to use the force on the Millenium Falcon for the first time, the player uses the plunger and flipper buttons to reflect blaster fire. It’s pretty cool, but it feels slightly out of place even in a fantasy pinball table.

The next table is probably the one everyone is most excited for: Boba Fett. Once everyone saw him in the original films, Boba Fett stole the show and became one of the most popular Star Wars characters. I can see the same thing happening here. Fett’s table is centered around the concept of playing as the bounty hunter himself, where the player must receive either Empire missions from Darth Vader or missions from Jabba the Hutt, earn respect for doing so, and defeat each of his bounty hunter rivals.

It doesn’t matter which missions you do, as they give the player a choice of five missions that are exactly the same and only offer more points and respect (all you have to do is hit every single lane). The higher they go, the less time the player gets to finish the mission. Experiencing the rare moment of hitting every lane in rapid succession and locking the ball/bounty onto Slave I truly makes one feel like the most badass bounty hunter in the galaxy. It’s moments like these that will make the Boba Fett table the obvious fan-favorite and most rewarding of the three tables.

Boba Fett features set pieces from his two short appearances in the films, such as Vader on his imperial ship (representing the left half of the table), Jabba’s Palace (the right half), the sarlacc pit (which the ball can actually fall into), and Han Solo in carbon freeze hovering above said pit. The ramps and lanes are inspired by pieces of Fett’s suit that will make even his biggest fans truly pleased with the love and care put into the creation of his table. 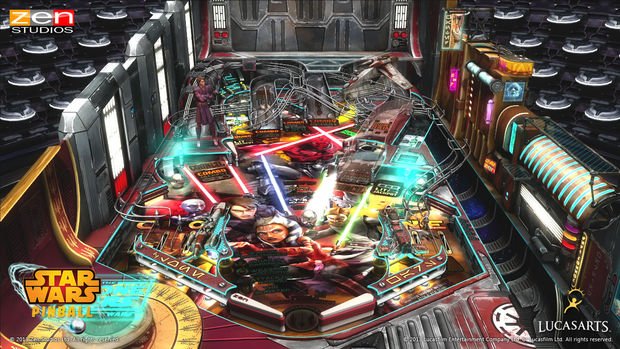 The Clone Wars table is the dark horse of the three. Going in, I wasn’t expecting much. Upon first firing it up, Clone Wars is the only table that has the classic intro text scroll. I thought was a really cool touch, especially as it was read by an announcer who also happens to narrate the entire game. This is by far the busiest table, with lanes and ramps stacked on top of each other on just about every visible inch of real estate, invoking a cramped, claustrophobic, and hasty feeling while playing the table. It’s this quality of sheer fastness that makes one initially think it would be the most challenging of the bunch, but that turns out to not be the case at all.

Clone Wars practically throws points at you, letting the player easily get five to ten million points just in the first handful of minutes alone, and it’s not a demanding task to get far beyond that within a short amount of time. After spending so much time on Empire Strikes Back and Boba Fett (tables that will certainly put your pinball wizardry to the test), dominating a table for a change was a nice break from the difficulty of the other two tables, and seeing a new palette of colors was a refreshing change of scenery. 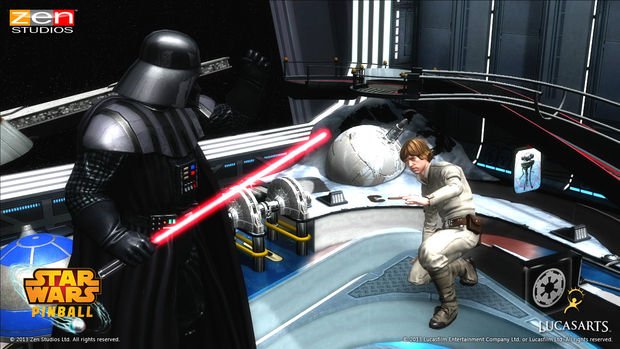 Each table is chock full of beautiful art, character cameos, and tracks pulled straight from the films’ soundtracks. These first three tables are a bold and equally stellar introduction to Star Wars Pinball, and they’ll keep you more than busy until Zen Studios drops the next batch.

At about $10, this is a bit more expensive per table compared to the usual $10 for four tables, but the package is certainly worth the asking price. If you’re not a fan of Star Wars, but love pinball (or vice versa), Star Wars Pinball will make you a fan. Zen Studios has created the most interesting and content-rich tables yet, with their obvious love of the source material piercing through each of the fantastically crafted tables.