Although Serious Sam 3: BFE is the big release for Croteam this year, that’s not the only adventure we get to embark upon with Sam “Serious” Stone. To promote the release of the upcoming shooter — and get some attention for a bunch of cool indie devs — a range of studios are creating unique Serious Sam games on various platforms.

Perhaps the most notable entry comes by way of Mommy’s Best Games, the studio behind unique indie shooter Weapon of Choice. The ever-offbeat Nathan Fouts brings us Serious Sam: Double D, and it’s just like the Serious Sam you know and love… except different. 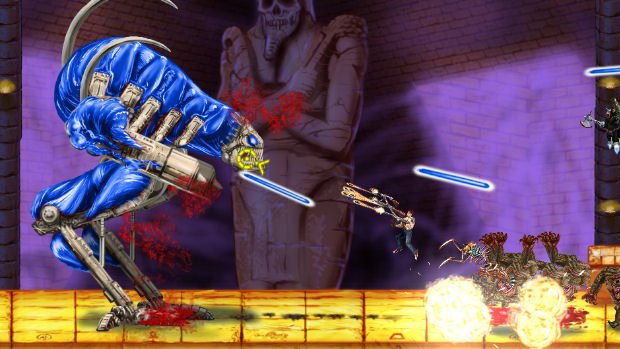 Serious Sam: Double D takes more than a few notes from Weapon of Choice, being a scrolling shooter with a colorfully hand-painted artistic style. Despite the shift from a first-person perspective, Double D has adapted the Serious Sam formula quite faithfully. The game is a simple, no-frills carnival of violence, as Sam takes out excessive swarms of bizarre creatures across a range of time-traveling levels.

Familiar enemies such as Kamikaze troops, Kleer skeletons and cycloptic Gnarls are joined by a few creatures cooked up in Nathan Fouts’ fertile and demented mind — legless primates that fire banana bombs, gigantic female Kamikaze soldiers, and living plates of pancakes that wield deadly vuvuzelas. The twisted imagination shown in Double D‘s design is quite impressive, if somewhat worrying. The best part about the designs is that they’re silly without looking like somebody tried too hard. One gets the impression that Fouts just casually thought caterpillars with machine guns would be a fun idea, and ran with it.

Fortunately, that artistic flair is married to some solid gameplay action. As is typical of Fouts’ style, the art direction informs the gaming, which means there’s still a strange “floating” feeling to Sam’s movement. It makes him a little unwieldy at times, but fortunately the mouse-controlled aiming is tight enough to make up for any imprecision. Not to mention, players get a good deal of control over Sam’s jumps, allowing players to maneuver quite deftly through a hail of bullets in mid-air. 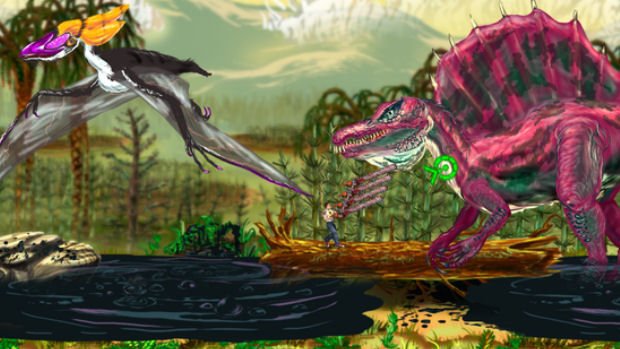 Although Double D sticks quite close to the Serious Sam formula, it manages to contribute a few original ideas to keep things interesting. Chief among the fresh material is Double D‘s “Gun Stack” system. Rather than wield each gun individually, Sam has the option of collecting “Connectors” throughout the game and using them to stick his weapons on top of each other. Up to six guns can be stacked, in any combination — provided you’ve got the right weapons and enough connectors. Do you want a rocket launcher on top of a chainsaw? How about two machine guns, a shotgun, a grenade launcher and a laser rifle? Hell, stick a flamethrower on top of it for all Double D cares.

As ridiculous as it is, the Gun Stack system is great fun. It’s not exactly deep, and the weapon variety isn’t extensive, but it’s undeniably quite fun to put together your preferred weapon of absolute death and watch it mow down the enemy with mindless abandon. It also allows you to tailor different combinations for different occasions, since multiple stack slots are available. I got through the game with one rapid-fire stack designed for ground troops and a combination of rocket and grenade launchers for bosses, but you can have whatever Frankenstein’s Monster you like.

As well as the gun stack, Sam Stone also has access to the Porta Pad. Throwing this down causes it to stick where it lands, and Sam will bounce from it upon contact. This allows him to make high jumps, or even perform a bizarre “wall jump” move by repeatedly throwing and bouncing from the pad to climb a chasm and reach secret areas. Another intriguing way to gain altitude is to use the corpses of enemies. Monsters don’t disappear when they die, instead laying where they fall and becoming part of the level in their own right, which players can exploit. One particularly cool level has Sam shooting infinitely respawning Gnarls so that their bodies pile up high enough to get him out of a hole. 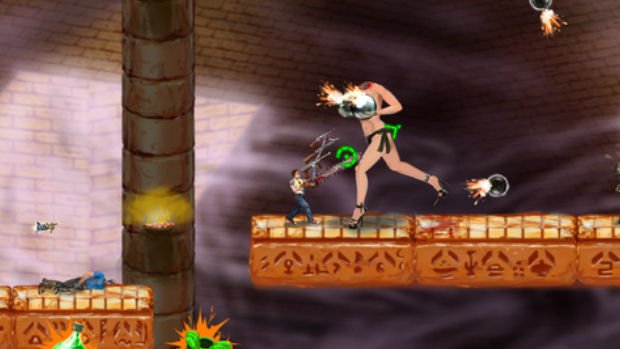 These little additions are about as “deep” as Double D gets. The rest of it is unfettered violence, explosions, and shouting as Sam carves his way through anything that moves. It’s certainly no cakewalk, either — Stone’s enemies hit hard and descend upon him in droves. It can sometimes get completely insane, with the screen literally full of bullets and monsters, but that’s pretty much the point. You’re supposed to switch your brain off and just keep shooting. It’s a Serious Sam game, after all.

The game won’t take much more than an hour to beat, and it’s definitely a repetitive affair, but there’s quite a lot of cathartic fun to be had with such a reckless onslaught of bullet-flavored justice, and there’s also a range of unlockable challenges in which one must kill a certain amount of enemies with pre-set gun combinations. For eight bucks, there’s certainly enough content for Serious Sam fans to get stuck into, though those who aren’t quite so keen on the series probably won’t get the same amount of enjoyment.

Serious Sam: Double D isn’t the most tightly produced of shooters, but it’s a laugh. With genuinely amusing, self-deprecating humor peppered throughout, and increasingly ridiculous opponents to tackle, Mommy’s Best Games has produced something that is sure to entertain, even if it doesn’t inspire. The combat makes for some excellent stress relief (while inducing a little stress itself!) and the clever gun-stacking mechanic lends the perfect level of freshness to a familiar formula. While those looking for a little more depth might want to look elsewhere, fans of simple and honest shooting action without complications will enjoy an afternoon’s flirtation with this particular offering.