Just look at those balls! Those beautiful, magnificent balls, zipping through those abstract planes of color and geometric shapes!

Proun is a beautiful and clever visual feast that deserves to be displayed in a museum — what’s that? You say it already has been shown in museums in the Netherlands and France? But that doesn’t really matter to us, the unruly consumers who play competitive, strategic games on the toilet with our iPhones. To us, what matters is whether the game deserves to be on our desktop at all.

Is the “pay-what-you-want” price tag, 350 megabytes worth of space, and five seconds it takes to navigate to Proun’s download link worth it?

Let’s go balls deep with this peculiar, self-proclaimed racing game and find out. 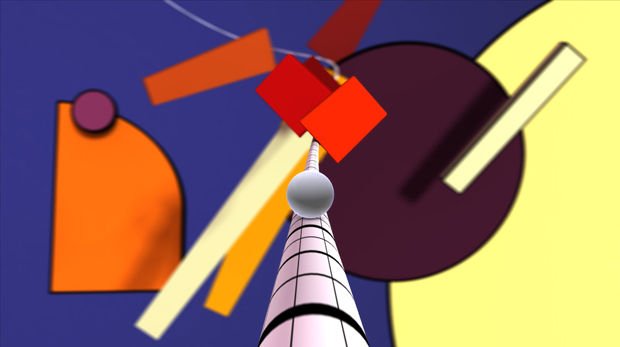 Proun is not a simulation racing game nor is it an arcade racer. It’s something I can only label a binary racer. It’s a game with Zen-like simplicity that makes 1982’s Pole Position look like rocket science by comparison. Once you peel away Proun’s outstanding presentation, you are left with a shallow game lacking ambition in every department beyond visuals and audio.

In Proun, you control a ball that is locked to a large, looping cord. The game is similar to Boost for iOS (Speed X 3D on Android), albeit without the accelerometer and less track space. Rather than drifting around corners or throwing red shells at an opponent, you simply rotate your ball around the cable, dodging obstacles that force you to find a safe, narrow route on the cylindrical track.

Each track has boost gateways that launch you forward, but you can also acquire boosts by avoiding contact with obstacles for a set amount of time. A progress bar lets you know how close you are, adding to the pressure. Although, you’ll rarely be able to successfully pull off a collision-free boost until you thoroughly memorize a track — therein lies the main problem with Proun.

Playing through the game’s three main tracks for the first time is a worthy experience. The fantastic visuals, soundtrack and sound design overwhelm with a sense of scope and immediate danger. The subtle lighting and depth-of-field effects transform the game’s bare world into an artful, curated landscape. Dodging imposing shapes and navigating through a tight pathway, while the game’s calming jazz soundtrack plays makes for an uplifting experience. Even when you hit something, coming to a dead stop, it’s hard to get frustrated — but then, you play it again.

After your first blush with the game, you realize that you are not only limited to a very small collection of tracks (five if you pay, four if you don’t) — you are limited in the way you navigate each track. For a game that is abound with imagination in its sound and visual design, it’s a shame that its creator and sole designer Joost van Dongen doesn’t offer the player the same amount of creative freedom.

Even Pole Position presents enough variables to keep players returning for faster lap times, but there is so little to “driving” in Proun that it’s hard to see any point to it. You dodge, boost and stay still (in order to reach maximum velocity). Since the speed and obstacles are set, a player could literally play the game blind-folded once a course is memorized. It would be an impressive task, but one I’m sure is possible. You can’t say the same for most other racers, where reaching a max speed and navigating a track offers a persistent challenge due to opponents (Proun‘s are merely ghosts to chase).

The game is thoughtful enough to include four-player split-screen and leaderboards, but these additions don’t improve the core of the game. Without an endless supply of hallucinogens, you will have a hard time keeping your friends interested for long. As for the leaderboards, they are full of crazy people who have memorized each track and play it like a machine. Unlike other racing games, there is an obvious path to getting the fastest time but only the most dedicated masochists will get there. They are probably methheads with God-like twitch-reflexes.

Fans have already posted two user tracks, which show off their prowess at rendering 3D environments. “Archipelgo,” posted in the game’s forum (by user JohnArr), is especially pretty. I can imagine the game being a great platform for 3D artists to show of their work, but I don’t think many aspiring game designers will take part. 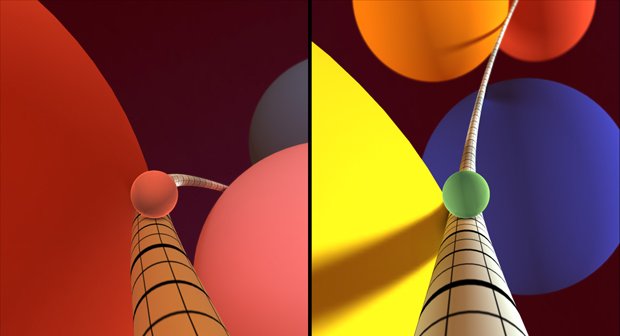 Dodging incoming shapes and preparing for the further away, out-of-focus ones makes for a fun way to explore the game’s 3D Studio Max landscapes. It’s like art appreciation for the hyperactive generation. Strap a jetpack to your dick and flying toward a life-size Mona Lisa! The fact remains though, the role of the player is secondary to the importance of the world, in Proun. Creator Joost seems to be aware of this.

“Design choices in Proun were not made to make it the best game for the player, or to make as much money as possible. Proun was made because I love the experimental art from the early 20th century.”

That’s all well and good, but this train of thought has resulted in a game that feels unfinished and bare. I love experimental art from the early 20th century as well, but I’m not going to write this review in pictograms. Mainly because that would be WAY harder to do, but it also would be a waste of your time, dear reader. You want to read words about games, and I want to play them.

Regardless of Joost’s ambitions, “pay-what-you-want” system and the game’s six years of development, Proun is neither a gem nor a waste of your time. In fact, I’d recommend it to anyone curious. Partly because you don’t have to pay, and partly because the initial run through the game’s Championship mode is thrilling.

If I sound bitter toward the game and its creator, it’s only because there is a lot of untapped potential that Joost has disregarded, in favor of serving his own art school ambitions. I deeply wish Proun was more of a game. One with more track space, competitive interaction between drivers and a Championship mode that doesn’t recycle the same three maps.  I want a racing game that is less Flower, more Uniracers. Or, hell, more of a game at all!

Proun deserves its place in a museum. It’s a work of art you stop and stare in awe at for five minutes, but then you quickly move on to the next painting — that’s assuming you give a shit about art to begin with.