“Tap away and let us be bound by our love of puzzles,” a man tells you during your adventures through Misthallery — the latest haunted, puzzle-infested English town that investigator Layton and his pint-size sidekick Luke must plod through.

Like past Layton titles, the appeal of Professor Layton and the Last Specter lies in its challenging puzzles, eccentric characters, and the narrative’s surrounding mysteries. More so than past titles, the mysteries of Misthallery are so well threaded together that you’ll want to finish the game, not for the sake of completion, but for the sake of putting your curiosity at ease.

Whereas last year’s Layton entry, The Unwound Future, gave us a glimpse at future Luke and Layton, Last Specter takes us back to the beginning of their friendship. Professor Layton is the same charming, famous, and brainy man he’s always been. Luke, on the other hand, is a social misfit in search of his true calling.

After receiving a mysterious letter from the mayor of the sleepy, comfy town of Misthallery, Layton and his attractive and confident assistant Emmy go to investigate. The mayor happens to be an old friend of Layton, though they haven’t kept in touch over the years. Nevertheless, Layton feels sympathy for the mayor’s son Luke (yes, that Luke), who is troubled by the strange disappearance of his mother and even more so by apocalyptic visions that he’s been having lately. 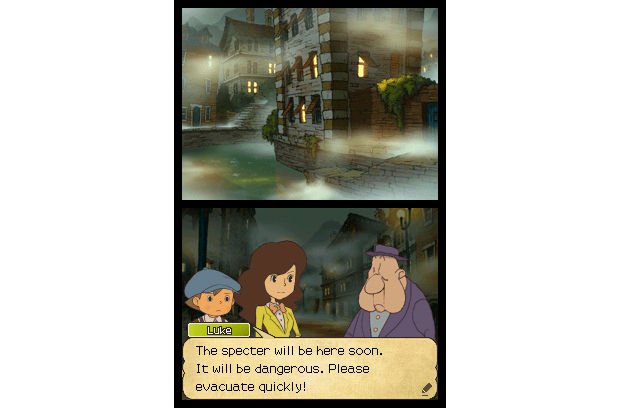 An ominous, lumbering mystical creature has been attacking the town every night, and Luke seems to be the only one with a clue. On the mayor’s order, Emmy and Layton investigate the situation. Unbeknownst to the mayor, they take Luke out of the house for the investigation as well, though Luke’s reluctant father doesn’t seem to mind or even notice.

The story and cast of The Last Specter are the best yet in the series, which alone makes the game worth picking up. You’ll be happy to hear than that the puzzles are also just as worthwhile. The variety of puzzles and increasing challenges will entertain both returning fans and newbies. Sliding blocks, riddles, mazes, math puzzles — man, I hate math puzzles — they’re all here! Well, all except matchstick puzzles, which should make most sane people happy.

Being the fourth entry in a yearly series, it shouldn’t come as a surprise that some puzzles are recycled from past entries. The graphics and wording are redone, but the tricks and solution at the puzzles’ core remain the same. This doesn’t happen as nearly as much as you would think, though, given the numerous amount of puzzles (150+). If nothing else, it’s a collection of greatest hits for newbies and a welcome break in challenge for veterans. 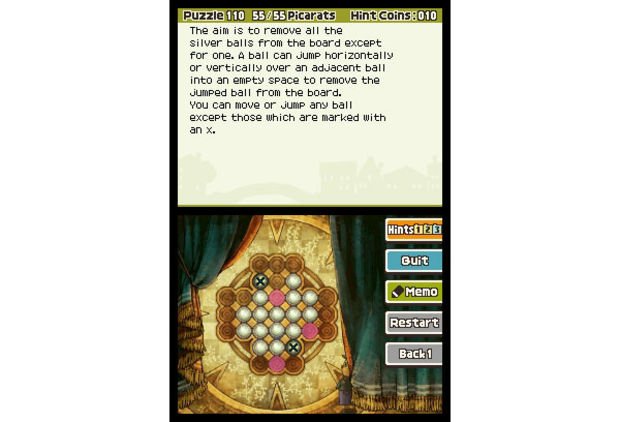 The biggest problem with Last Specter, which has plagued all series entries, is the over-arching design of the game. A Professor Layton game is two things: a visual mystery novel and a collection of interactive Akira Tago puzzles. The series has always struggled to find ways to seamlessly blend the two. The transitions from character introduction to puzzle are less awkward in Last Specter — largely thanks to a referential, humorous script — but I still find much to complain about here.

I absolutely hate tollways in games. Like, when an RPG won’t let you enter an area until you are at a certain level, or when you can’t progress to the next mission in a game until you have completed enough side-missions. As with past titles, Last Specter has moments where it will tell you that you can’t continue until you do 25, 50, or 80 puzzles. It really kills the momentum and flow of the narrative.

As a result, these games make me feel like I’m rubbing my stomach and patting my head at the same time. When I want to just enjoy the narrative and the main, plot-based puzzles, it stops me and sends me packing in the other direction. When I want to just relax and play some puzzles, the game inconveniences me with plot and poorly organized systems. For example, why must I search for the location of a previous puzzle I chose to leave undone? What does that add to anything? Why not just let me enjoy that puzzle from anywhere? I already discovered it, right?

Although exploration is still time-consuming, Last Specter has a warp system (via Bucky’s boat rides on the city’s canals) that makes things easier. You’ll enjoy your first couple of trips through areas on foot, since Misthallery is full of early-1900s decor and zany citizens that makes the world of Layton such a romantic and comfortable one. 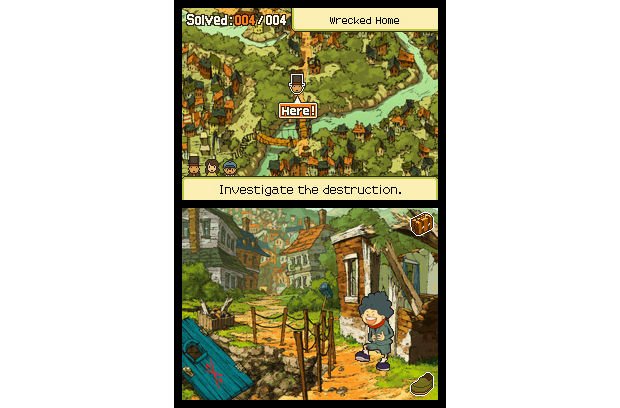 Misthallery sets a new bar for amusing, eccentric Layton inhabitants. It’s hard to say why exactly they are crazier than usual, but it definitely keeps things interesting. My favorite character is a toss-up between a boy who thinks he is a bird, a homeless maniac who laughs at everyone’s misfortune (including his own), and Goosey, a fat, mentally-stunted teenager who hides — despite being too fat to hide anywhere — and exclaims “That’s Goosey!” when he’s found. It’s kind of creepy yet adorable.

In nearly every aspect, Last Specter feels most faithful to the original in its design, story, and structure. It improves on the format in subtle ways but fails to evolve the series in others. Instead of chasing more ambitious ideas (how about a Professor Layton where players can create/share puzzles?), implementing full voice acting (still limited to animated scenes and specific events, though this may just be a limitation of the DS), or tying puzzles and story closer together, Level-5 have churned out just another series entry. Mind you, it’s the best one yet, but it still comes short of reaching the concept’s full potential. 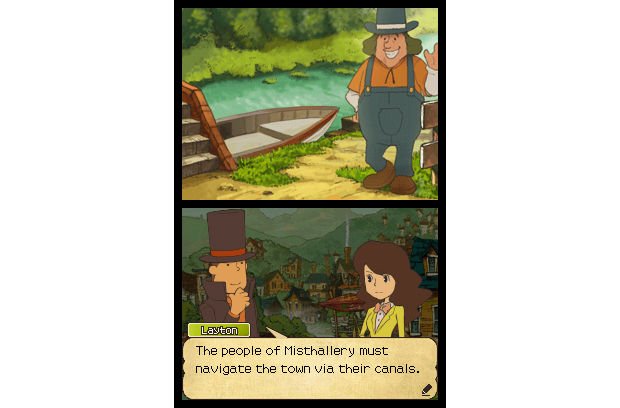 Still, it’s difficult to damn the game’s shortcomings, since no other developer has come close to achieving what Level-5 have done. Professor Layton is the only game I can get my mom to play, yet I can still enjoy it. Last Specter may not have any big twist on the format, but it’s the most well designed entry yet. Perhaps there is comfort to be found in repeating a winning formula.

In short, Last Specter is the best Layton yet. The inclusion of a warp system, lack of matchstick puzzles, and memorable cast makes it just a notch better than the Curious Village. However, the series still inconveniences players who play primarily for the story or those, like me, who want to enjoy the story first and puzzles later. There are many players who feel a need to complete every puzzle as they progress. These players won’t run into the problem of puzzle tollways or losing track of a previous puzzle’s location. However, until the series finds a way to accommodate both types of players, I can’t say the game is a must-have for all. 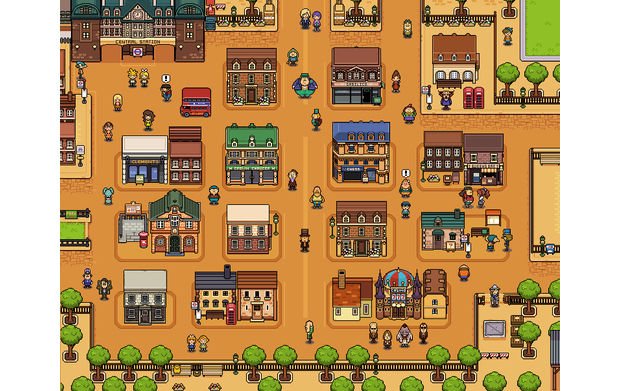 “From the team behind Mother 3! One hundred hours of gameplay! RPG! RPG! YAY! OH GOD YES!!! FUUUUUuuu… just give it to me! That’s it! I’m taking off my pants! I’m dancing! I’m dancing! Look at me, ma! I’m dancing!”

That’s me regurgitating PR sheets and blind enthusiasm for what I thought London Life may be before its release. Here’s what it actually is: Shit. It’s free shit that comes attached to a worthwhile game, but it’s still a bummer that it’s a worthless and dull bonus. 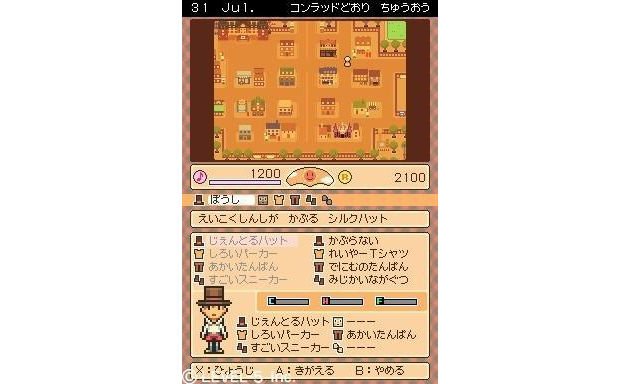 Let’s dispel some of this PR hogwash. First of all, the game is not really the team behind Mother 3 — Brownie Brown primarily (only?) did that game’s art. As a result, London Life looks a lot like Mother 3, which is to say that it’s gorgeous.

One hundred hours of gameplay? I doubt it, but we’ll probably never know since most sane players will give up on it after two hours or less. I certainly wasn’t going to put myself through playing the entire thing for review purposes — it’s a bonus, after all, and one that is not fun at all to play, at that.

RPG? Hardly. The game is like Animal Crossing or The Sims stripped down to its bare components. You go buy things, talk to townsfolk, and decorate your minuscule apartment. The problem is that there is little else to do, and the jobs you must take, in order to acquire wealth, are as mind-numbing as they come. The entire game is based around talking to a character on one side of the map, walking to a character on the other side of the map, and repeating until you are a rich dude with a beret and large sofa. In case you want something equally dull, you can hunt for trash on the street.

You’ll probably end up spending less time on London Life than the puzzles within Last Specter, except those are actually worthwhile and fun. London Life may not indicate the quality of the forthcoming Fantasy Life project between Brownie Brown and Level-5, but it definitely hasn’t increased my confidence. If London Life‘s goal was to present what it’s like to be a boring, senseless peasant in the world of Layton … well, mission accomplished!