A chip off the old Hook Champ

It’s no secret that one of my favorite iOS games of all time is RocketCat Games’ Hook Champ. It perfectly captures the concept of a touchscreen control scheme, by giving you the simple ability to grab onto pretty much anywhere on the screen, and flip your way to victory without the frustration of a clunky virtual d-pad.

In another corner of the world, a small group of people felt the same way, but they took their appreciation a bit further. They created Mikey Hooks as an homage to Hook Champ, striving to re-create the experience RocketCat nailed so perfectly. 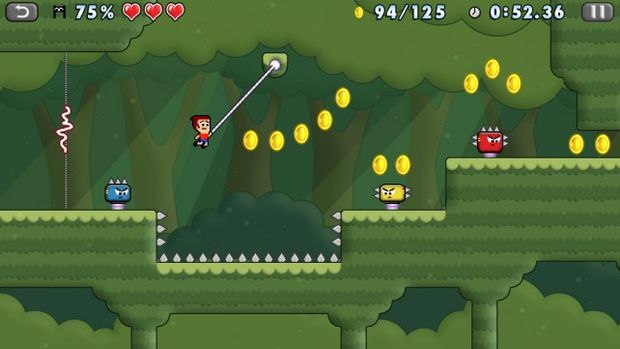 As a follow-up to Mikey Shorts, Mikey Hooks modifies the original’s formula in a big way — it adds the ability to grab onto aerial blocks and swing to your heart’s content. The setup is still the same, as you’re tasked with geting from one end of the level to the other, using a minimal virtual d-pad that allows you to move left or right, and slide and jump.

As many of you know virtual d-pads have the opportunity to ruin a game, but the fast-paced nature of Mikey Hooks really lends itself to the control scheme, and I had very little issues doing what I needed to do. Whether it’s on an iPad or an iPhone, I was able to control Mikey perfectly, and every time I died, it was my own fault. The “hook” physics work really well, allowing you to press the jump button in the air to grab onto specific blocks, with the ability to let go and launch yourself forward.

The levels are very well designed, to the point where nearly all of them can be completed by running forward constantly, and jumping/sliding at all the right moments. Everything just feels incredibly fluid and decidedly action based, which makes for a pretty exciting and clean experience.

But as soon as you start having fun, the game is pretty much over. Mikey Hooks‘ campaign is very brief, and you can finish it in about an hour’s time, or under an hour if you don’t go for a three star rating (based on your clear time) in every level. After all was said and done, although the game has a very solid foundation, I couldn’t help but feel a tad underwhelmed.

It didn’t really ramp up the difficulty until the end, and in many ways, the campaign felt like a tech demo for a more fleshed out title. Part of the reason why it doesn’t reach its potential is due to the lack of enemy variety, as the only three foes are robots who have spikes on their sides, spikes on their heads, or spikes on both. With a few more enemy types the game would force players to adapt a bit more to its world, and would add a whole new dimension to the game. Leaderboards and hidden “Golden Shorts” tokens in every level help, but they didn’t compel me to keep playing.

Thankfully, there’s a bit more to experience, because once you’re done with the fairly brief story mode you’ll have the opportunity to tackle race mode, which offers up a more challenging take on the formula. Here, you’ll have to race three ghost bots across new levels, as you devise a way to reach the end as fast as possible while avoiding all of the hazards along the way. One mistake could mean the difference between first and second, so I really enjoyed the difficult nature of the mode, as it puts your precision platforming skills to the absolute test. If any content is added post-launch via updates, I hope it involves more races. 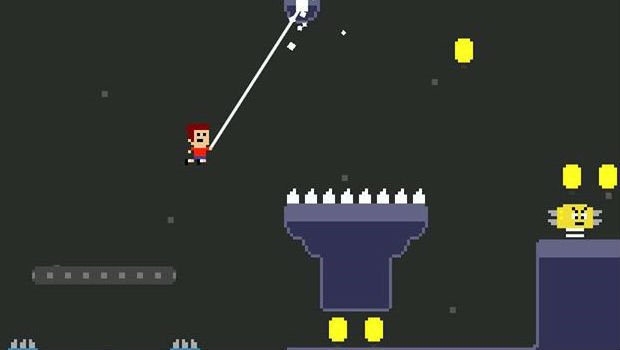 There’s tons of content here if you’re keen on collecting all of the game’s hats, faces, and hooks — but the vast majority of your replay value (if not all of it) lies purely in cosmetic items. The only real extra in Mikey Hooks is the “retro mode,” which is included in a $0.99 IAP bundle that also comes with a coin-doubler, a coin magnet, and a bigger life meter. None of these extras is essential in any way and all of them can be turned off, but the retro filter is a nice touch that adds a new way to look at the game.

Despite having a virtual d-pad and buttons, Mikey Hooks is a great addition to any platformer fan’s portable library. Although I don’t think it surpasses Hook Champ as an absolute must-buy, it’s a really fun game in its own right, and a perfect example of a serviceable platform game on iOS.