Commander Shepard, protagonist of last year’s undisputed GOTY Mass Effect 2, has a lot of favorite things. Whether it’s a store on the Citadel, carrying out Pyjak genocide, or punching reporters in the face, Shepard likes a lot of things. Except Reapers.

Then again, Reapers are to Shepard like the Batman is to the Joker; life just doesn’t have much meaning without their existence. In the last piece of Mass Effect 2 DLC before we get to have a collective nerdgasm over Mass Effect 3, Arrival does not only bridge the storyline but forces Shepard to take actions that may have severe consequences.

Whether or not that makes it a worthwhile purchase depends on a number of things, and it’s mostly something you’ll have to find out for yourself. But if you are a Mass Effect fan, Arrival will satisfy your hunger in a number of ways. Let’s find out how it does this without delving into spoiler terrority too much, shall we? 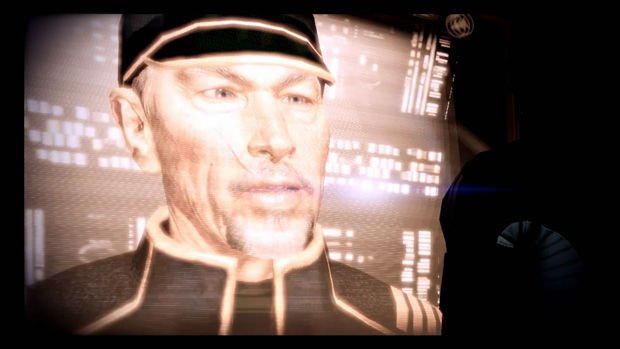 In Arrival, Shepard is tasked by Admiral Hackett to rescue deep cover Alliance operative Dr. Amanda Kenson, who has been captured by Batarians while on a secret mission in Batarian space. Dr. Kenson has uncovered a Reaper artifact that supposedly reveals new information about the impending Reaper invasion.

The problem is, Batarian-Human relations have been far from warm ever since Humanity entered the galactic playground. Any official rescue mission by the Alliance would put a serious strain on the already poor relationship between the two races, and Humanity can ill afford any further headaches with a potential Reaper invasion on the horizon.

What better way to resolve this issue than by sending the Normandy SR-2 (with its cloaking abilities) and a Spectre on a covert mission? Because the Batarians will likely kill Dr. Kenson if they see an armed squad making a mess of things like Asari teenagers enjoying spring break on Omega, Shepard will have to act alone without any backup from his or her squad members this time around. 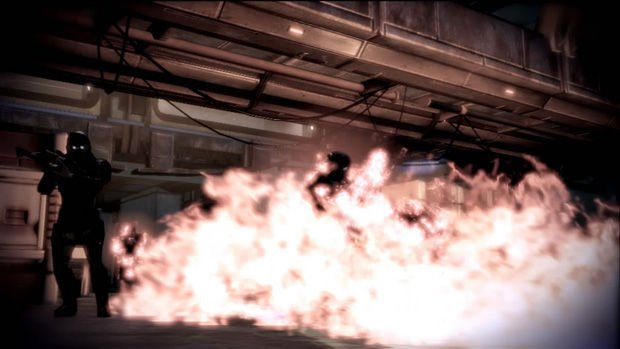 Without spoiling too much about the actual storyline and happenings — which the trailer already does if you haven’t seen it yet — suffice it to say that the rescue mission itself threads familiar ground. You can choose to take a stealthy approach for an achievement or trophy, which just means you run around the two or three encounters with Batarians on the way to Dr. Kenson. As I was playing my Renegade female redhead Vanguard Shepard, of course these dirty slaver Batarians had to die; that achievement would have to wait.

Making your way towards Dr. Kenson’s location in the Batarian prison compound on planet Aratoht in the Viper Nebula, you encounter logs that provide both insight into the Batarians’ paranoia about Human aggression and details on how they found and captured the good doctor. As you traverse the mostly linear series of grim corridors, occasionally finding alcoves splattered with the blood of ‘retired’ prisoners, it becomes clear that the Batarians both fear and hate humans. But do they have a good reason to fear us?

While the rescue mission itself is pretty straightforward and sees you thread at a good pace on Veteran difficulty, it’s the events that follow the rescue mission — leaving the dark locale of Aratoht for a brighter environment — that makes things more interesting for Mass Effect fans. Dr. Kenson has been working on a top secret project involving Reapers, asteroids, and mass relays. And as it turns out, the Reapers are far closer to invading our galaxy than was previously thought.

So close in fact, that drastic measures will have to be taken to prevent the Reapers from using the key Batarian system of Bahak as a staging ground for their galactic cleansing. Exploring Arrival‘s story is half the fun, so — Harbinger be damned — you will have to find out what happens for yourself. 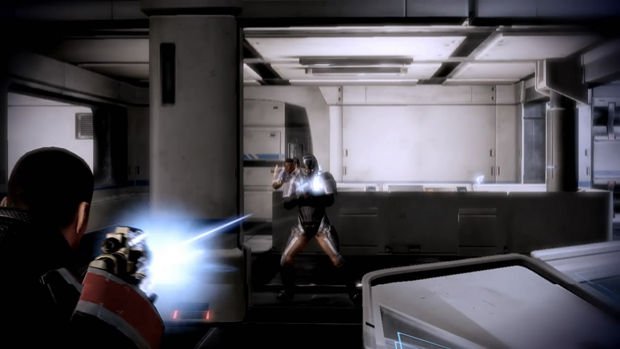 As far as the gameplay is concerned, Arrival only sees you traversing corridors, rooms, and a (brief) open segment reminiscent of Mass Effect’s finale. Although it’s mostly centered on corridor-based combat, the level design appears to keep your Shepard’s class in mind. Being a Vanguard definitely helped, because you can easily spam the hell out of enemies with the Shockwave ability.

But Infiltrators will not be at a disadvantage either, as there is plenty of room to take cover and snipe your foes. Most of your foes are organic, with some shielded engineers and ‘Pyro’ soldiers here and there. Whatever skills you chose when building your Shepard, you shouldn’t have any severe problems with the combat. Opening doors and running in blind might lead to a couple of instant deaths on Insanity, but it’s nothing you won’t be able to handle.

Still, I wouldn’t recommend playing Arrival straight away when starting a new career. And to be honest, it doesn’t make any sense in the storyline to do so anyway. If you haven’t finished Mass Effect 2 yet, play this after you complete the main storyline; you will only spoil and confuse yourself if you don’t. The events are set after the main game ends, and some ‘things’ in the ending relate to how ‘things’ look in Arrival.

Interestingly enough, a YMIR Model 34-A heavy mech stops walking straight into you this time around. If you had any headaches dealing with their unrelenting approach in the past, which usually destroyed any hope of survival if you ran out of terrain or cover to escape to on Insanity, you’ll be happy to know that they are a bit more fun — if slightly less frantic — to dispatch. A gameplay diversion involving another familiar type of foe makes for a nice distraction in what is generally a typical Mass Effect 2 gameplay affair. 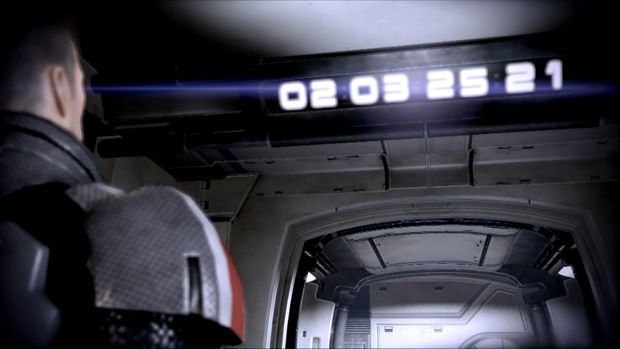 One of the selling points of the DLC, other than the obvious bridge to Mass Effect 3, is the existence of a “sacrifice.” While this sacrifice is indeed a costly one, the game unfortunately never gives you a good reason to really care about it. Your inescapable actions have severe consequences, regardless of Paragon or Renegade choices, and may actually explain a few seconds of Mass Effect 3′s trailer. But the feeling of a paying a heavy price, which you are supposed to relate to on an emotional level, is just not there. Instead, the sacrifice’s effect is mostly political and distant.

Having said that, the consequences of Shepard’s actions could play a huge role in the Mass Effect 3 storyline, but it’s too early to tell for sure. With less than 9 months on the calendar, and little indication of how much creative control the DLC creators have had with respect to affecting the storyline of the upcoming chapter in the sci-fi epic, it might only have side-quest levels of consequences in the end. (Mass Effect 3 designer Manveer Heir has since told me that Arrival‘s story “was driven/approved by the head writer so it’s all canon & relevant.”)

What Mass Effect 2 fans will want to know of course, is whether or not they should buy Arrival. Do you really need it if you are a fan? Yes. Is it worth 560 points or $7? I think so. Overlord was the same price, and while Arrival doesn’t feature the M-44 Hammerhead, the potential storyline impact on the wider Mass Effect universe makes it better than the already good Overlord DLC.

Arrival takes about one hour to finish on Veteran, and will probably last you a little over 1.5 hours on Insanity with an effective Shepard build. For the hardcore fan, that means you’ll spend around 2.5 to 4 hours on it across multiple playthroughs.

However, Arrival is not quite as good as Lair of the Shadow Broker. It lacks that piece of DLC’s emotional engagement, and nothing in Arrival comes close to the sense of discovery you got while unveiling the true identity of such an iconic character. Also, Dr. Kenson looks like a cross-eyed version of Dr. Chakwas with Kelly Chamber’s hair. I mean, look at her! 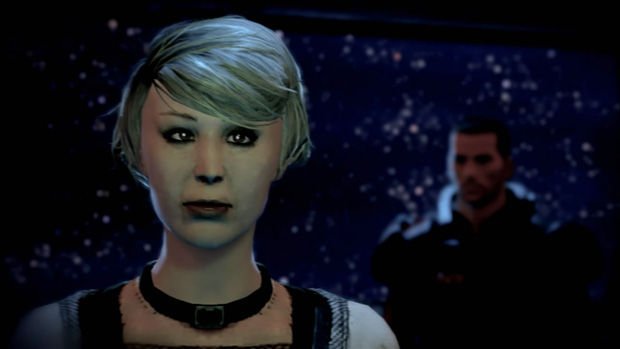 Still, that doesn’t mean it is by any means bad or even mediocre. As Mass Effect 2 DLC goes, Arrival is about as good as Overlord — which I’d rate as an 8/10 — with respect to the ground combat, and better in terms of the storyline’s impact on the wider Mass Effect universe. Since the gameplay is mostly the same thing you’ve seen before, the final verdict relies heavily on how much you care about the Mass Effect universe. As a fan of the franchise, I have zero regrets having spent points on Arrival. It’s well paced, and having an enjoyable new reason to revisit Shepard’s exploits in deep space is worth the price of admission alone.

However, as this is the final piece of Mass Effect 2 DLC and because it follows the fantastic — but higher priced — Lair of the Shadow Broker, I can’t help but feel that BioWare missed an opportunity here to create the ultimate piece of DLC to show the world just how you bridge the gap between two titles in a story-driven trilogy. Don’t get me wrong, Arrival sits comfortably between Overlord and Lair of the Shadow Broker in terms of quality and I still want to play Mass Effect 3 badly, but I don’t want play it that much more badly after having played Arrival.

In fact, I would’ve preferred Arrival to be 800 MS points/$10 and be better than Lair of the Shadow Broker. Something that would’ve reminded me of all the aspects that made me fall in love with the Mass Effect games in the first place, and something that would’ve gone beyond what anyone would’ve expected DLC could be capable of. Nitpicking aside, Arrival is still a competent and worthwhile piece of DLC that any Mass Effect fan will enjoy multiple times in preparation to Mass Effect 3.

Oh, and save your game somewhere when you are in front of a certain timer display. When it runs out, there’s a tiny something to make it worth your while.