A spark of inspiration

Mario + Rabbids Kingdom Battle was a fun surprise, mixing together some unexpected ingredients in Mario, Rabbids, and strategy for a good strategy game. And Mario + Rabbids Sparks of Hope doesn’t just repeat; it builds up into a delightful experience that feels all its own.

Sparks of Hope initially follows a similar formula to Kingdom Battle. Mario, Luigi, and Peach are hanging out with their Rabbid counterparts and floating helper Beep-O when a giant space monster attacks. The gang finds out that galaxy’s at stake, as the evil Cursa is converting minions to her side to gain control of hybrid Rabbid-Luma creatures called Sparks.

The team sets off, with some new tactics and weapons in tow. Those six, alongside newcomer Edge, Bowser, and Rabbid Rosalina, form the Sparks of Hope squad. It’s a fun group that makes for an engaging campaign.

It’s not a complex or nuanced narrative, but the humor is excellent, emphasized by the much more talkative Rabbids. Rabbid Mario is a particular favorite of mine now, as his braggadocious take and occasional exclamations of “mamma mia!” kept him in the party for quite some time.

The tactical differences become apparent once Mario + Rabbids Sparks of Hope kicks into battle. Rather than a grid-based, XCOM-alike system, characters can free-roam within their set movement area, only stopping once they’ve fired a shot. It’s a bit tricky to get the hang of at first. But I quickly adapted and really started to enjoy how active the combat felt in Sparks of Hope. 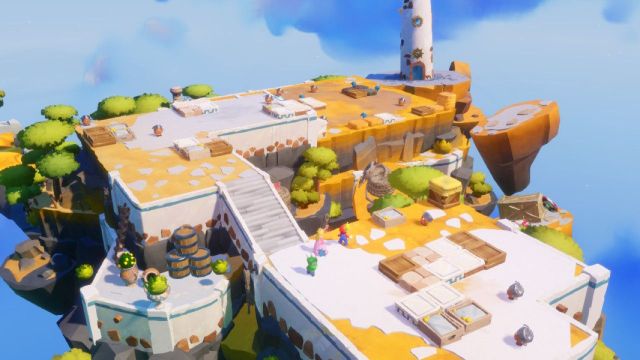 Tools of the trade

Mechanics like the team jump to extend movement range and dash feel natural in this context, and it’s easier to line up shots without having to lock in a specific square. I still encountered a few instances where the target lock got a little too finicky or character movement felt a bit awkward, but overall, the system works well, and gives Sparks of Hope a bit of its own tactical identity.

The big winner for me in Mario + Rabbids Sparks of Hopes‘ battles is how customizable and individual each hero feels. Every character can be equipped with Sparks. These provide both a passive buff and an active ability; one might increase your chance to critically strike an enemy, and scare foes away from the user when activated. Many of the elemental Sparks let a character proc effects, like Burn or Freeze, with attacks or dashes. On top of that, there are weapons. The party’s arsenal feels extremely well-crafted in Sparks of Hope, with every fighter bringing a different specialization to the field. Bowser and Peach take a direct approach, for example, using massive weaponry to annihilate cover.

But maybe you want that cover to stay up? Rabbid Peach can’t hit an AoE, but she can reach past some cover with her triple-rocket burst. Or Rabbid Luigi can bounce his discus behind enemy lines to ricochet into the foe.

Building up even more, every character has several skill trees the player can upgrades through Skill Prisms. They all have options focusing on health, movement, weapons, and the party member’s special ability. Luigi’s overwatch ability can gain more charges and snipe moving foes through terrain, for instance. Edge’s giant sword can be upgraded to spin in a wider pattern, and eke out more damage as it passes back and forth through more foes.

All of these elements combined make for a malleable party, easy to tailor to the occasion. I was surprised by how often I thought I’d found the most overpowered character, only to find them lacking in some areas where others could excel. And to be clear, every character can work, too. The viability of most team comps felt great, and aside from the need to have some healing in prolonged battles, I felt remarkably free to craft my perfect party as I saw fit. 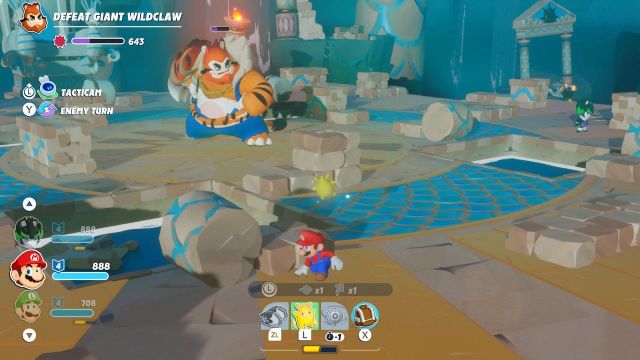 It’s a testament to the design of Mario + Rabbids Sparks of Hope that I rarely fielded the same squad twice. I was always scouting the field, analyzing the enemies in play and tinkering with my lineup and Spark setup before every fight, and happily doing so. Figuring out perfect combos, like mixing Luigi’s overwatch with a freezing on-hit attack Spark or using an invisibility Spark to sneak past foes and into the goal area, feels incredibly rewarding.

Battles are also just bite-sized enough to be compelling and exciting. Most overworld fights drop you right into the action, with a handful of enemies in a special configuration to take out. Event fights escalate things a bit more, adding special objectives or targets. In my review-in-progress, I mentioned one that required me to use wind tunnels to move a Bob-omb from one side of the map to the other. As the campaign goes on, it doesn’t lose any of that creative spark.

Then there are the boss battles. There are only a few, but they are gauntlets. My main frustration is that, at least in some, the player isn’t given a chance to reassess and regroup between stages. If you roll in with a strategy that isn’t quite clicking, that usually means having to force it through, or restarting from the beginning. That can be frustrating when the fights themselves, especially some of the later ones, offer some exciting twists. 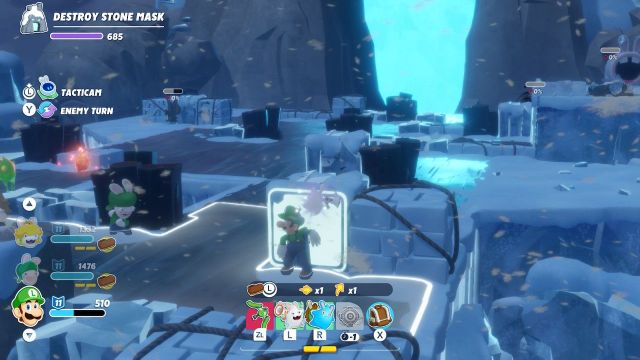 Those boss fights are where the music shines bright, though. And this is the part of the review where I have to acknowledge the work Yoko Shimomura, Grant Kirkhope, and Gareth Coker did on this OST. Sparks of Hope has some brilliant, big battle moments and pleasant overworlds that are all served well by their tunes.

Aside from tactical battles, there’s actually a pretty enjoyable amount to do on the overworld. The Ubisoft team has done a good job at making each planet feel like its own area, with nooks and crannies to explore, and worthwhile rewards for doing so. Many don’t even require a battle. 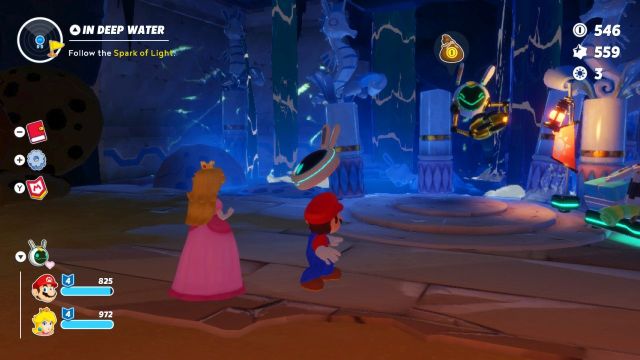 Some Planet Coins, the currency you can use to unlock weapon skins and other goodies on each planet, just involve some puzzle-solving or pseudo-platforming to pick up coins. And the actual lengthy side quests that recruit a new Spark are fun ventures.

Even the areas in the overworld are fun to explore, though some can put a little strain on the Switch’s hardware resources. And traversing the mini-map can get a little frustrating, as the map interface’s cursor seems to have trouble “latching” onto points of interest sometimes.

Mario + Rabbids Sparks of Hope is an enjoyable tactics game that is remarkably well-designed and executed. Its battles keep things fresh, always throwing new ideas and combinations at the player, while giving you enough tools to toy around with to feel like a master tactician when you solve them.

Though the narrative itself is pretty thin, the charm is what carries this campaign through mission after mission. There were times where sequences dragged on, or I had to do some repetitive back-and-forth tasks to move an objective along. But those were fewer and farther between from the moments I was laughing at Rabbid Mario’s antics, or gleefully setting up a continuous combo on a poor, unsuspecting Rabbid.

Kingdom Battle may have proven that a Mario and Rabbids crossover can work, and work well. But Mario + Rabbids Sparks of Hope has cemented this as a franchise in my eyes, one that is worth playing if you’ve got any interest in lighthearted tactics with a Mario and Rabbid twist.