Mario Party is, in my opinion, a staple of Nintendo’s chaotic multiplayer offerings. Smash Bros. has a good deal of fighting and frenetic chaos, sure, but there’s something different about Mario Party. This party, and Mario Party Superstars, are about the potential for both fun competition and massive swings in equal measure.

It captures the moment someone rolls a die and lands on Boardwalk in Monopoly, and seethes in quiet frustration as they count out every last buck they have to fork over to another player, and turns it into a fully virtual board game. The earliest Mario Party games are some of the best adaptations of this anything-can-happen concept. Spinning blocks with stars, arrows, and portraits could swing the outcome of the match in a single turn.

There were fewer stay-ahead mechanics, and more comebacks and massive swings. It’s this side of the Mario Party that Mario Party Superstars goes back to, and if you’ve been aching to steal someone’s stars, it’s got a lot of that going on.

Mario Party Superstars is essentially a best-of for the earlier era of Mario Party games. The boards themselves come from the first three Mario Party games on the Nintendo 64, while the minigames pull from the N64, GameCube, and more. Content-wise, it’s presenting exactly what it says: a rehash of the best, from an era that’s pretty beloved by Mario Party aficionados.

And honestly, Superstars makes a good first impression. After a short intro sequence, you’re greeted with a menu screen that seems ripped right out of the Nintendo 64 years. There’s something about this sort of hub village that transports me back to the era of not just Mario Party‘s first few games, but also Pokemon Stadium and other N64 go-to’s. Hopping into the boards, you can see right away the visual upgrades made to each one. These are, functionally, the same boards as before. The haunted woods and space station are just as you remember them, except with a visual upgrade. But that visual upgrade really does make a difference.

Highlighted by the side-by-side you’re presented with at the start of each board, you can really see how much different these boards look now. It’s remembering the games like your rose-tinted memories do, rather than what they actually looked like back then. Having a revitalized version of these classics might be enough by itself for some Mario Party fans to pick this collection up.

And the boards do hold up. They are every bit as hectic, infuriating, and ridiculous as I remember. In one match, I advanced forward a few spaces and landed on an event tile, which caused a Thwomp in a car to chase me down the lane I had just advanced across and all the way to the other end of the board. “Okay,” I thought. “It’s bad, but I’ve got some Double Dice. I can roll doubles and make up the time lost next turn.”

Then next turn, I locked in a special event I half-paid attention to as I passed by and landed on the exact same Thwomp event as before. Except now, because I had activated the other one, I was pushed back even further. I had to laugh, because really, that is Mario Party: a mixture of cold, cruel die rolls and comedy found in the suffering those die dish out. 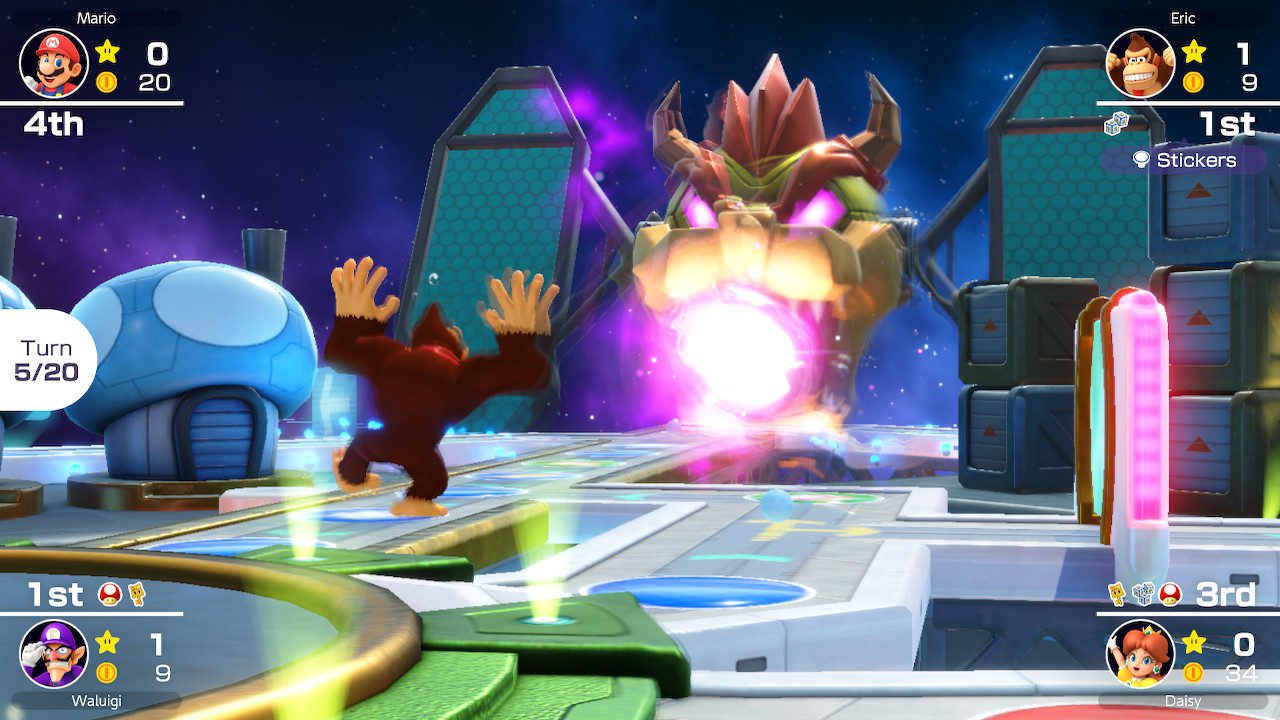 If board games aren’t your style, there are actually a fair few things to do that aren’t just classic Mario Party. They’re all contained in the Mt. Minigames area, which has a pretty impressive number of ways to repackage and host the large collection of minigames in Mario Party Superstars.

Some of them are a little more team-oriented, while others provide a solo challenge. I like the idea of Daily Challenge modes, as it gives you a reason to keep coming back to the minigame mountain, and it threw a few neat playlists of games my way.

To be clear, it’s all still playing the minigames you know from Mario Party proper, but they’re packaged in a way to encourage a little bit more teamwork than you might have in the board game. The 1-against-3 mine-cart gauntlet is an example of this, where you’re challenged with win-streaking with a team against one foe in consecutive minigame bouts.

To be honest, I spent most of my time on Mt. Minigames in the sports area, where games like volleyball and hockey were available as their own standalone experiences, with rankings to climb and everything. An hour went by in a blur when I was playing a bunch of volleyball matches, and it was honestly a blast. 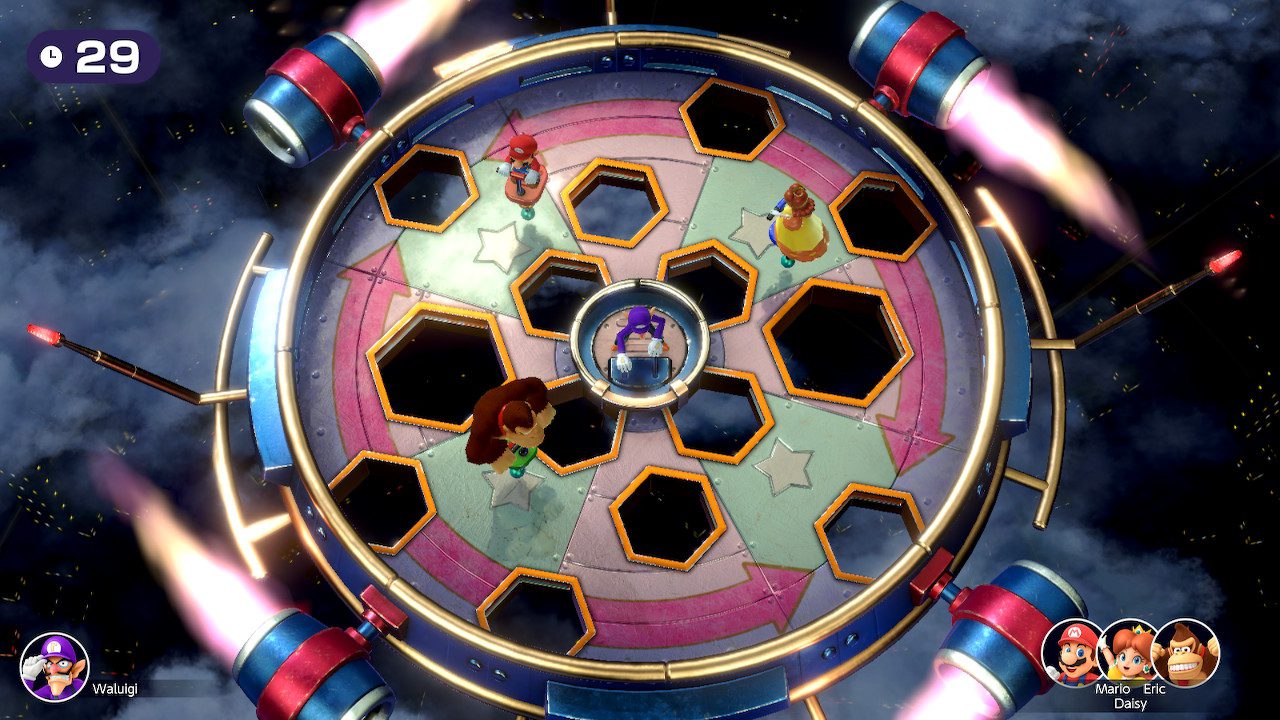 While there are local options available for Mario Party play, in both the board game and minigame areas, another big draw is online play. Unlike its predecessor, Mario Party Superstars has online play right out of the gate, and in my experience, it’s worked fairly well. I’ve heard anecdotal cases of players dropping when they get too far behind, but like a game of Monopoly, sometimes you can’t help but have a few walk-offs.

What’s been most notable to me is the contrast between Mario Party Superstars and Super Mario Party, the previous Mario Party go-to on the Nintendo Switch. The latter was a new game, and it tried a lot of new ideas. I think some of them were interesting, and I especially dug the mode that sent four players hurtling down a river in a raft together. There were some interesting stabs taken at what a co-op Mario Party experience might look like, though the main Mario Party formula wasn’t so great. Character dice were cool but made it easy to stay ahead, in my experience, and the board offering was less than stellar. Games also took a pretty long time to close out. 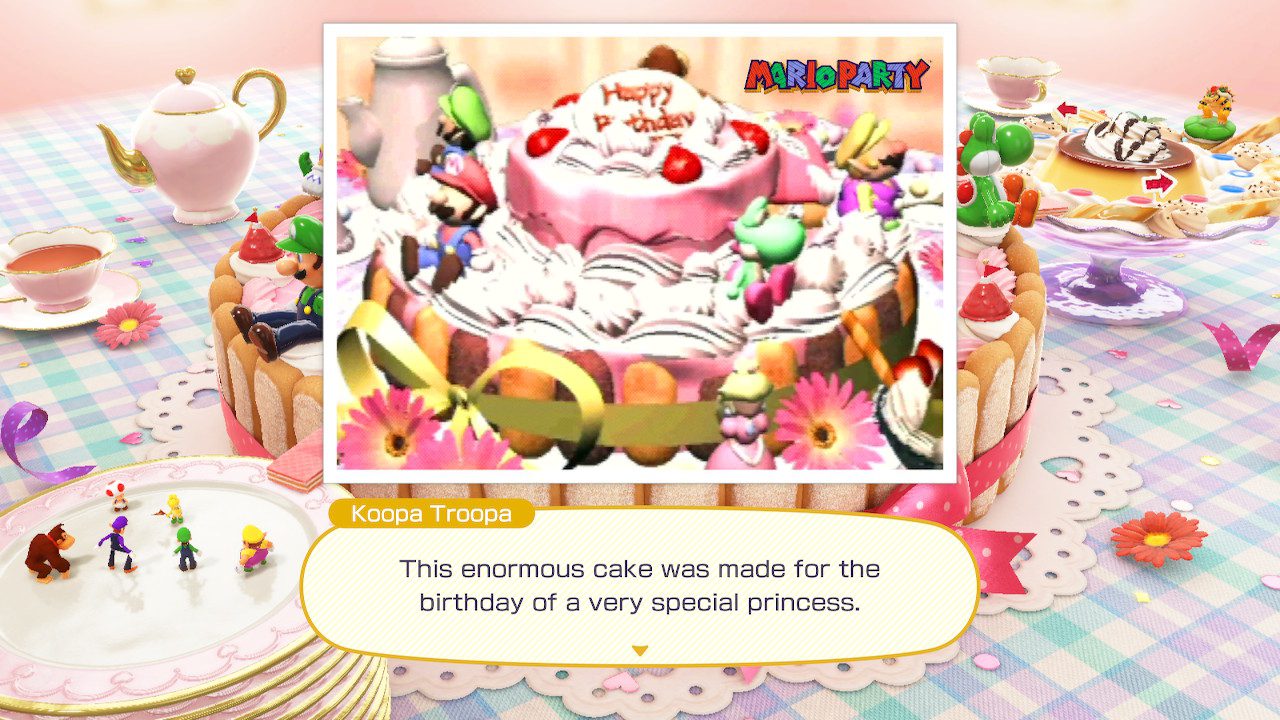 Contrast this with Mario Party Superstars, which uses the benefit of its own legacy to launch right out with the classic Mario Party its fans fell for in the first place. It is absolutely a retread, with its innovations coming in the visual tune-ups and clever repackaging of content. And the retread also works really well. I’ve found myself revisiting this on a whim much more than I did with Super Mario Party, and most of my time has been single-player too, as there’s a surprising amount of fun to find even if you don’t have a party going. And it revives a lot of what I’ve liked about past Mario Party games, from higher-cost Stars to interesting board mechanics like the plants on Peach’s birthday cake.

So while Mario Party Superstars doesn’t necessarily break massively new ground, it’s so good at replaying the classics that it will probably be my new go-to for Mario Party fun moving forward. It isn’t just the Nintendo 64 nostalgia talking here; this is a good collection of minigames, a smart board selection, a nice-looking game, and it’s got tons of settings, dials, and options to fiddle with for repeat play sessions. It might not be filled with new ideas, but Mario Party Superstars plays the hits, and plays them as well as it did the first time around.