Take my review of last year’s Madden 13. Give it a roster update. Associate any players I named who’ve been swapped around like pogs with whatever their new team is. Axe a missed dangling participle or two. Tighten up the mechanics of writing. Maybe there was a misused em dash. Replace it in a way that is (probably) grammatically correct. Add some flourishes here and there. Some new puns, maybe.

You now have my review of Madden 25. 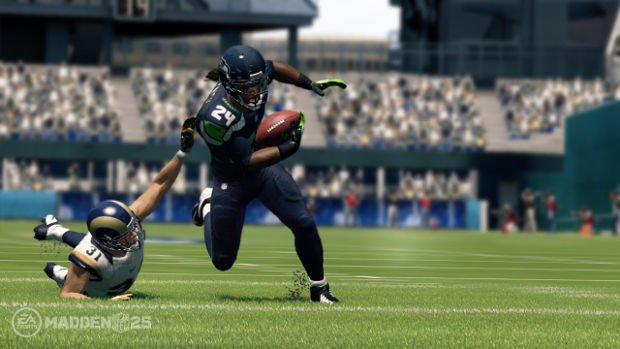 Madden XIII-2 would be a more accurate title than the grandiose, franchise-celebrating Madden 25. And is it back to 15 next year? That reads like an anniversary, too. One with ten less decades of baggage, a slightly shorter ouroboros of perpetual “tweaks” and balances that probably can’t be ironed out. I’m not sure we’re at a level wherein 21 AI footballers can respond in dual unison to player input in a wholly believable or realistic way.

Most people, whether they watch sports or not, have seen gut punching clips of sports injury. When a shin snaps in Madden 25, it’s just a player model going a bit janky. The player gets right back up. It’s like an uncanny valley for human suffering when you see ankles and knees twisted in realistically horrifying, career-threatening ways coupled with no human response. 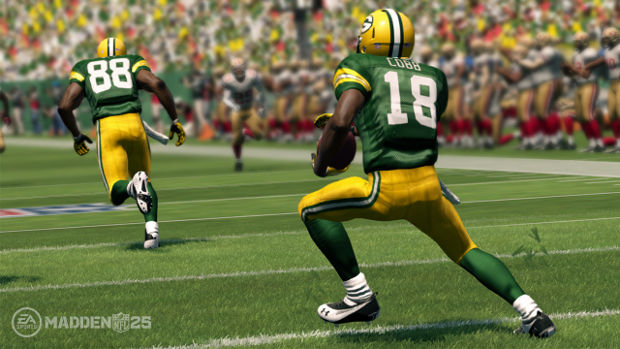 Speaking of things that don’t look human, let’s talk about the coaches, trotting on the sideline with hair that is a pasted-on nightmare. Let’s talk about Jeff Fisher’s two balding spots that you can follow to the top of his head, hair looking like it was greased down with a helmet-full of petroleum.

Yes, the physics are more finely tuned. Less flailing about, a more faithful recreation of movement. Taking angles, watching footwork, seeing legs tangle — yes, this (and its predecessor) is a fairly different Madden, one whose new movements require some unlearning.

You’ll have to unlearn the desire to hold sprint down at all times. I still found myself doing it when they removed the sprint feature, choosing your speed for you. It’s since been returned and I hold it still. With L2, now, there is something called “the precision modifier.” Holding L2 slows you down — but allows for more exaggerated, powerful versions of existing movements. Wilder spins, high amplitudes of juke oscillation, and an exaggerated stiff arm that’s almost a Star Wars Force choke, among other things. 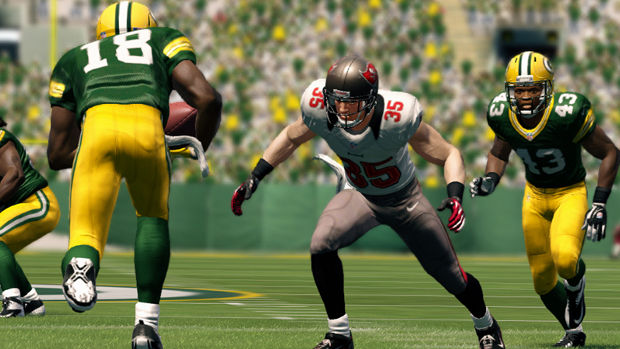 It was fun in the skills trainer, no longer hideously Nike-branded as NCAA Football 14‘s was. I struggled to implement these more measured movements in games, though, especially on the fly. A decade of muscle memory will do that to you.

The user interface is better. Big, clean boxes. Everything runs a bit slow, though. This isn’t new. Madden, for its posturing, is always just a bit janky outside of the mostly well-running core. Weird lighting filters change quickly during PATs, saves are slow. Perhaps it’s naive at this point to hope a new generation of consoles might have any positive effect on the series, beyond remedying these technical hiccups.

Any chance at radical, significant change seems to be hamstrung by the commercial, one-year development cycle. It’s on display even here. It took a long enough time to get physics put into the series, but it took until the second go around (this one) for them to be implemented well. At least it finally happened, and to good effect. But there are always fixes EA could blithely busy itself with instead. 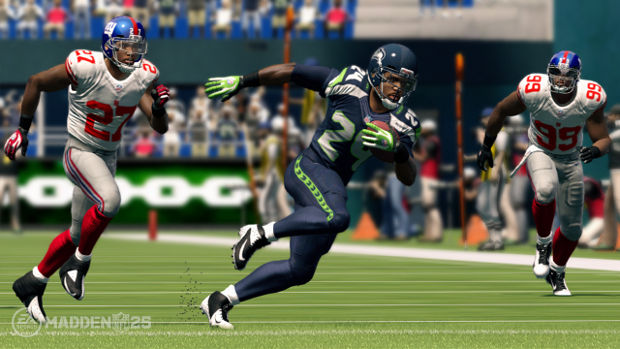 Defensive backs are often prescient, leaping into the air to pick off deep balls on streaks in which the receiver should have more than enough separation and the DBs hardly enough time to play the ball in the air. Receivers in general tend to be relatively timid. Except on onside kicks when the ball will magically fly into the computer’s possession as if compelled by magnetism. It often literally flies into your opponents’ hand — one hand — without them even attempting to make a catch.

You know what I would really like? A pared-down, no-nonsense mode for people who don’t care about the instant replay brought to you by Snickers. For people who really, really don’t want to hear more terrible commentary.

I found some of the improved presentation bits novel, sure. The new pre-game opener looks like a Final Fantasy XII Quickening. But these flourishes will never be anything more than things we want to thumb through because we are trying to play a game of football. Yes, my knees are blown out. No, I won’t ever play in the NFL. I’d just like to play some virtual football. That won’t happen, of course, because matchups have to be brought to us by Papa John’s and GMC, the official truck of the NFL. Then again, EA is only offering realism with its heavy advertising, right? 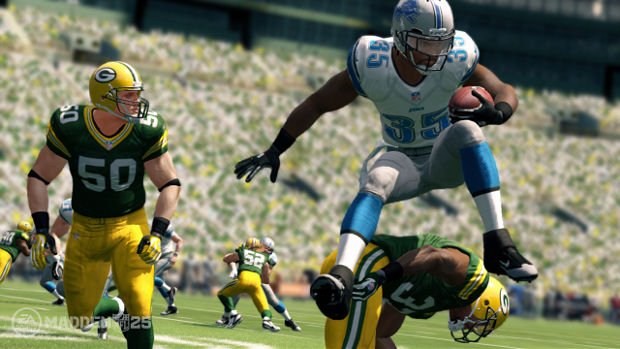 Madden 25 is an improved version of the clumsy Madden 13, which was better than any Madden game that released on this generation of consoles. The physics are good and make manipulating these hulking brutes in a fabricated 3D space feel comfortable and occasionally interesting. Ultimate Team is still nothing I want to do, ever.

Nutty by Nature raw almonds are the unofficial nut of this Madden 25 review.