Following a few ramshackle E3 presentations, expectations for Kinect Star Wars were tempered at best. After footage of the game’s Galactic Dance Off mode, featuring a dancing Han Solo at the carbonite pit, hit YouTube, these expectations turned from “low” to “the deathblow for the entire Star Wars franchise.”

There’s certainly more to Kinect Star Wars than a mere generic collection of mini-games, but is really the manifestation of Naga Sadow’s wrath for motion gaming? 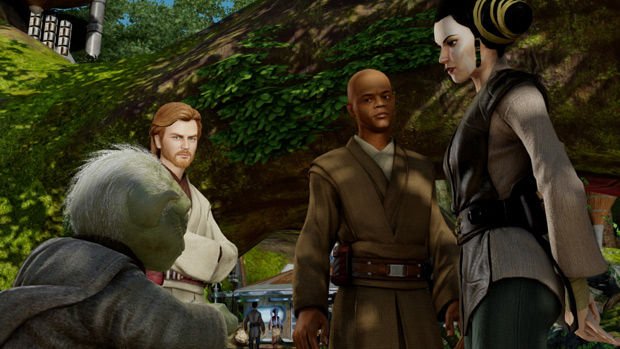 Even though it was once billed as a hardcore Kinect experience, Kinect Star Wars is nothing of the kind. It’s meant for family entertainment pure and simple, primarily aimed at the audience that bought Kinect for games like Kinectimals or Kinect Sports. In other words, people with children or perhaps groups of friends who like to goof off with motion games in a social setting. That said, there are plenty of issues to be found that even younglings may have trouble overlooking.

A lack of responsiveness is the most glaring problem that pervades many of the offerings in Kinect Star Wars, and the impact on gameplay is most evident in the game’s most lengthy story mode, titled Jedi Destiny: Dark Side Rising. In this mode, you and a co-op partner star as Padawans as they fight through waves of battle droids and Trandoshans, trying to bring an end to some nonsensical nefarious plot set between Episode I and Episode II which doesn’t impact the Clone Wars lore in any meaningful way.

Your lightsaber swings are controlled by waving either your left or right hand around, depending on which you prefer, or with both hands at the hilt. The translation of movements to in-game actions is sadly far from perfect, making it hard to hit a target’s head or slash an opponent on the ground. The motion controls can initially result in a form of Kinect waggle, since all you seemingly have to do is land any kind of hits on a target to incapacitate it — no chopped-off limbs here. However, pace yourself with slow and articulated swings and the game will allow itself to be enjoyed a lot more than if you insist on wildly flailing your arm around.

Nevertheless, lightsaber combat is mediocre at best, and not just because of a lack of feedback on your swings. Some types of enemies will use vibroblade knifes of electrostaffs to block your saber strikes, forcing you to jump over them and strike them from behind, block their attack if you can, or dodge to the side and time a counter-attack. Because dodging is practically never recognized correctly, these enemies lead to a lot of frustration as you try to find an opening to land a few hits. On the second and highest difficulty, this leads to a lot of unnecessary deaths as you are hit or kicked in the face without any way to block or evade properly. Fun, it is not.

Despite most of Jedi Destiny being on rails, there is some limited movement available. A Force Dash move is at your disposal if you take one step forward with your arms aimed backwards, while your character of choice will walk automatically from scene to scene. As much as it highlights the on-rails aspect of the mode, it never becomes a big impediment on the action, since it’s only a few seconds of walking at a time, at worst. Targeting enemies is far more problematic, since you’ll be assigned targets you can dash or jump towards, and it can be annoying if you end up fighting multiple tougher types of enemies who will inevitably deal some damage. If you are unlucky, you’ll target a Super Battle Droid three times in a row, who will always find a way to kick or punch you unless you keep vaulting over them. 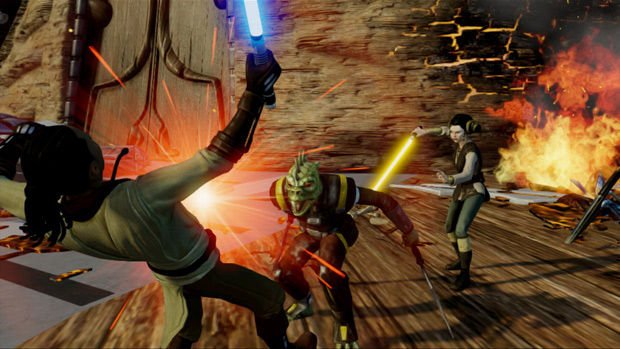 The dodge controls are broken enough to ignore it as a reliable evasive maneuver altogether, and the same is true for Force grabs. It’s nearly impossible to target a crate or enemy, and only the weakest of enemies can be grabbed to toss around, rendering the move as useless as a pregnant Ewok in battle. On the other hand, whenever Jedi Destiny allows you to do something other than moving from ground target to ground target, it can actually be quite enjoyable.

Speeder bike races through the forests of Kashyyyk and the flora of Felucia are entertaining, controlled by holding your arms forwards and banking left and right to move along a narrow path. Space battles, in which you only have to aim a target reticule, are a blast to play, and even feature some of the better set pieces in the prequel trilogy’s history as depicted by its films and television shows. Whether you are blasting droid starfighters or capital ship turrets from the turret seat of a YT-2400 light freighter (e.g., Dash Rendar’s Outrider), or from a Delta-6 Republic starfighter, it can be strangely empowering in a space battle nerdlust kind of way.

Jedi Destiny also offers some occasional nods to the Original Trilogy for Star Wars fans, such as a protocol droid pointing out a faulty power coupling when Chewbacca can’t get a ship’s hyperdrive to work. Yet for every attempt at appeasing the fans, it has Obi-Wan reference a Sith Master in the time shortly after the events of The Phantom Menace, or throws two random Dathomirian Nightbrothers with Sith lightsabers into the mix. If LucasArts wanted to provide players with a recognizable enemy like Darth Maul, they should have just gone with Savage Opress instead. Even for the more casual of fans, it’s a shame that the majority of Jedi Destiny makes you stand, swing, and jump through extended periods of lightsaber combat, as it’s by far the weakest link in the entire package. 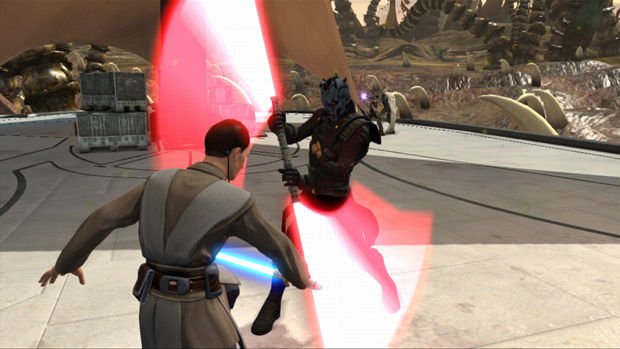 Thankfully, Jedi Destiny is but one of the available modes in Kinect Star Wars. Podracing is an interesting distraction, even if it’s once again undermined by excessive control features. Holding out your arms powers up the two engines, while pulling one hand back lets you steer in that direction. Nudge both hands to any side, and you can bash into nearby competitors for some damage. It works remarkably well for the racing aspect itself, but unfortunately that’s not all you do in this mode. From time to time you need to pump one hand to the sky to activate a repair bot or laser drone, swing a hand to the side to smack a womprat off your podracer, or clean water from your visor if you hit a moisture vaporator. The problem is, you need those hands to actually steer the damn thing, and performing these distracting actions is a sure way to lose the lead in any race.

Rancor Rampage is somewhat of a fleshed-out tech demo, more specifically the monster rampage concept demo seen in one of Kinect’s earliest announcement trailers. There is some catharsis to be found here, smashing buildings and grabbing things to throw or munch on, but it can get old rather fast. While there are multiple levels to progress through by earning points in each map, it’s more of a throwaway mode to let your child roar and act like a monster — or annoy the downstairs neighbors — than anything you’ll play more than half an hour at a time.

Jedi Duel expands on the occasional “boss” encounters from the Jedi Destiny mode, making you block and parry slow-motion moves in order to fill a bar and launch a counter attack with blows of your own. These duels aren’t very fun, but the requirement to execute a nearly flawless series of parries and attacks to unlock more iconic opponents, such as Count Dooku and Darth Vader, is simply ridiculous. Very few players will have the patience to sit through repeated attempts just to get under the required time limit for a Duel, let alone impatient children. 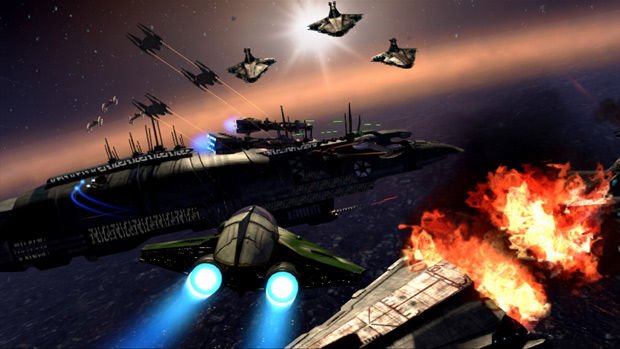 Which brings us to the Galactic Dance Off mode. The dancing mode is more or less a lite version of Dance Central, with some tweaks. On-screen prompts for moving a hand or limb in perfect conjunction with the dance moves are a nice addition to the formula, even if registration of badly placed body parts can be spotty from time to time and a training mode is strangely absent.

Yes, the adaptation of popular song lyrics to the Star Wars universe can make you cringe when you watch a video of it, but playing it is actually rather fun. There’s something silly about the parody approach which elicits scoffing smiles and chuckles rather than making you want to choke your Naboo wife with adolescent anger. Not every song features absolutely terrible lyrics, either, as “We No Speak Huttese” simply features Joh Yowza singing Huttese, and Daft Punk’s Aerodynamic has no lyrics whatsoever.

Of course, any functional dancing game can be a pleasurable experience, but a lot of the fun in Galactic Dance-off comes from moves and poses which reflect things from the Star Wars movies. Performing the “Bantha Rider” or “Jet Pack” moves is ridiculous enough that you can’t help but laugh, and the “Han Shot First” and “New Hope Pose” moves are kind of awesome.

If you don’t like Just Dance or Dance Central, this mode isn’t going to change your mind. For anyone who does like dancing, however, the frivolous nature of the dance moves more than makes up for the cringe factor of the lyrics. In fact, I wouldn’t be surprised if this dance mode spawns an entire series of lyrically adjusted dance games. As an aside, the higher difficulties you unlock offer many different moves that are a lot more varied than what you would ordinarily be exposed to if you would only play each song only once. 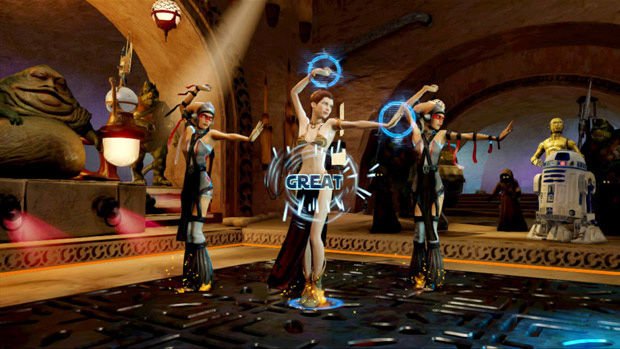 Alas, Kinect Star Wars as a package is a mixed, if varied bag of motion tricks. For everything that works well, something else ruins the experience. Kids might have fun with Rancor Rampage and with Jedi Destiny on the easiest setting, but any single adult has no reason to bother with it. Podracing would have been better without all the nonsense to distract you from racing, Duels are best ignored altogether, and dancing is such a universally human expression that you can’t really go wrong with it.

Despite its flaws, it’s a mostly inoffensive title and one that you may find yourself hating far less than Anakin hates sand; you might even enjoy it. The franchise didn’t die after the prequel trilogy was released, and if it had, we wouldn’t have been able to watch Genndy Tartakovsky’s Clone Wars cartoon and the later seasons of the Star Wars: The Clone Wars CGI TV series, or play Republic Commando. Kinect Star Wars isn’t going to kill the franchise, nor is it the worst videogame ever made; it’s just not a very good one.

In those areas where Kinect Star Wars does work, it can be a lot of fun to play, and this makes it so disappointing that it so often falters elsewhere. In the end, how much fun you will have with it is going to depend largely on whether or not you have kids to keep occupied while they play with their friends, or how desperately you need something other than Dance Central 2 to play with your own friends.