Of all Nintendo’s classic franchises, Kid Icarus is one that has sorely been lacking in love, with protagonist Pit’s failing to make even a playable Super Smash Bros. appearance until Brawl rolled around in 2008. However, that all changed when the 3DS was officially announced and Kid Icarus: Uprising made itself known to the world.

With its unique control scheme and gameplay designed to show off the 3DS’ always impressive visual trickery, Uprising tries to make good on Nintendo’s promise of innovative handheld gameplay and graphics that can make jaws drop. However, to do that, you need a plastic stand that comes shipped with every copy of the game.

On that note, all I can say is that if your handheld game needs a static add-on in order to make it less unbearable to play … you might have a problem. 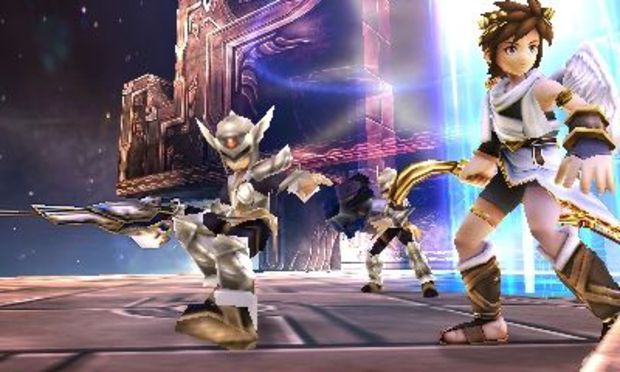 Kid Icarus: Uprising does a lot of great things. Its lighthearted story full of camp characters, shameless self-references, and constant desire to break the fourth wall is entertaining and often amusing. The sheer wealth of content is impressive, with a full-fledged campaign, multiplayer options, and additional content. There’s also a brilliant difficulty adjustment system, allowing you to make precise tweaks to the “intensity” of a level in exchange for more rewards. There’s so much to love about Uprising, and that’s why it’s so distressing that over 50 percent of it is actively unpleasant to play.

Each stage of the solo campaign is split into two rough halves: a flying section and an on-foot section. Both segments of the stage control about the same, using the analog nub to directly maneuver Pit, the stylus to move a targeting reticule onscreen, and the left trigger to handle attacks. Holding down the trigger will see Pit spew a consistent payload of firepower, while pausing between shots sends out a more powerful attack.

Due to the awkward button layout, it’s almost essential that the included stand be used, as it allows for far more comfortable play. However, due to the static position of the system, the 3D will likely need to be turned off completely. I find myself often repositioning the 3DS in my hands to keep the 3D focused, but when it’s fixed in place on a desk, I have to stay hunched over to get it to look good. It’s easier to just switch it off.

The flying sections are rather enjoyable to play through, thanks to the more streamlined combat and automatic flight path so that players simply move to avoid enemy attacks. While repetitive after a while, the first half of each level is a simple rail shooter affair that marries fast-paced action to some truly stunning visuals, providing a rather inspired rollercoaster ride through Uprising‘s imaginative, colorful world. If the entire game had been like this, I’d have hailed it as one of the best handheld games of all time.

However, half the game is not like this, and I even suspect that more of the game is played on the ground than in the air. These sections are horrible, due to a control scheme that simply does not work for the type of third-person combat that Project Sora insisted on using.

As with flight, the nub moves Pit, the touchscreen aims, and the trigger fires. However, due to more direct control over Pit, Uprising attempts to squeeze more actions out of the limited input, and the result is an absolute mess. The touchscreen controls the camera as well as the targeting, meaning players constantly have to stroke the screen in order to get a bead on targets or see where to go next. The nub not only moves Pit around at a stuttering pace, but also controls all of his dodging. If you want to dodge, you must move the nub quickly in a given direction, and you can keep it in place to make him run. If you just want him to walk, you must carefully slide the nub, otherwise he’ll sprawl over the floor before sprinting off.

Now, keep in mind that the nub is rather sensitive and that heavy combat situations don’t lend themselves well to precise, methodical movement. Also keep in mind that a vast number of levels feature very thin platforms with plenty of gaping chasms. While we’re at it, you might like to know that Pit can only dodge or run for a few seconds before getting winded and stopping to have a breather, even if you accidentally dodged one too many times or if he keeps running when you just want him to walk. Oh, and “walking” consists of this awful hopping motion that’s about as unwieldy as a survival horror protagonist from two generations ago. Now, imagine how tempting it is to toss one’s 3DS, with the cart still in it, under a train when all this collides in one metaphysical sphere of torment.

This is the overwhelming feeling that almost every stage in Uprising leaves me with. 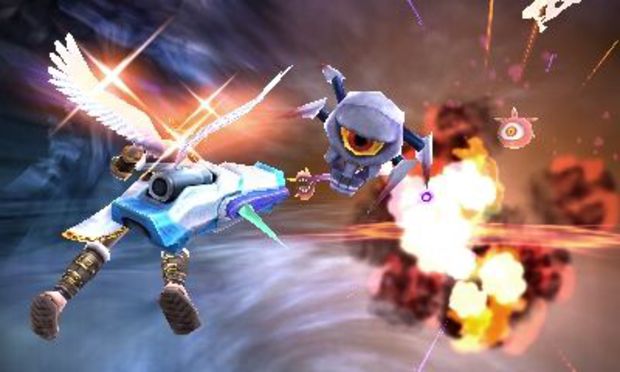 The latter half of each level, and all but a handful of boss encounters, force this wretched control scheme on the player, and it severely hurts the entire affair. The only other option is to use the face buttons to move pit and the circle pad to aim, which is even more awkward (it’s unintuitive to move with the buttons and if you change directions too fast, Pit will still dodge of his own accord). Meanwhile, the secondary circle pad peripheral is only functional for left-handed use. As Pit constantly flops around each stage like a wet fish, all I can do is marvel at the arrogance of a studio that was so committed to a failed idea that it would rather mold plastic stands to try and reduce the torture rather than actually fix the underlying problem of a game that simply does not work on the platform it was designed for.

Every now and then, this miserable dance of disarray is broken up by vehicular sections that at least allow Pit to move with a sense of consistency, but they suffer from awful gliding physics that see him bump into walls more often than not. There are also a variety of power-ups that can be equipped, selected with the D-pad and performed by touching an icon with the stylus. However, many of them require precise aiming, which is ludicrous when you’re being asked to use the stylus to aim and attack a fast-moving enemy. Things like that give me the impression that Project Sora just didn’t care how the controls worked, it simply wanted to use them at any cost.

Outside of the campaign, there’s a multiplayer mode consisting of team and free-for-all battles. These six-person bouts put players in the bodies of generic soldiers, all running, dodging, and flailing about while attempting to kill each other. Eventually, losing players get to take control of Pit or his obligatory opposite, Dark Pit, becoming a walking objective for the enemy team to neutralize. The online play is functional, but due to the use of the same unsavory input as the campaign, it’s hardly a superior alternative. 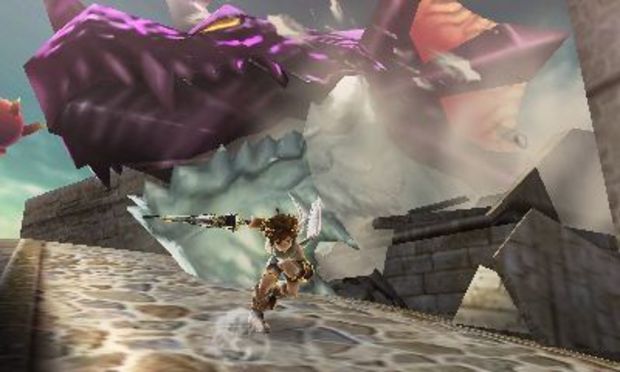 Uprising comes packed with a selection of AR cards, nobly attempting to take advantage of this underutilized 3DS capability. I was really looking forward to seeing what the game did with these cards, but the disappointing answer is that hardly anything was done at all, with functionality barely above that of the cards in the 3DS system’s box. Each card will produce a character, monster, or weapon from the game that bounces around in a relatively cute fashion. If two cards are made to face each other, they can fight, but “fighting” consists of a few slash effects while two health bars deplete. That’s it. One of them will lose while the winner continues its canned animation. The AR mode is worth using once then never again. 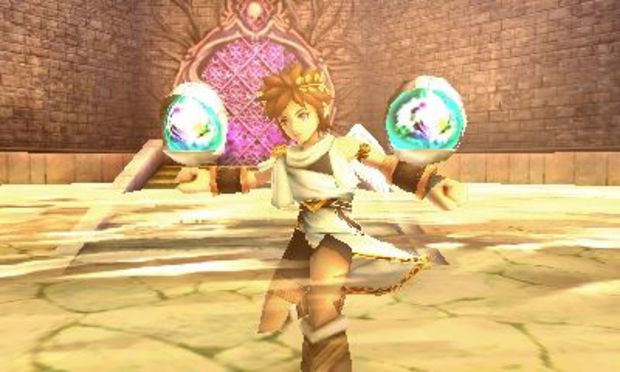 If only someone had stopped and wondered if the need for a 3DS stand was a clear indication that the concept was broken, maybe things could have been different. The requirement for a peripheral does not fix the issue, it simply wallpapers over it. It’s a jerry-rigged solution to a problem that needed complete elimination. Because of that, the game lets itself down, time and time again.

Kid Icarus: Uprising is equal parts tremendous and terrible, with a fine line clearly separating the two distinct territories. Unfortunately, since each stage ends on a sour note, the overall emotion one gains is that of bitter disappointment. It’s a game that repeatedly starts strong and ends despicably, and as much as I want to adore it, I ended every session cursing its name. For its humor, its ambition, and its genuinely thrilling flight segments, it deserves a lot of credit. However, everything else it does is a bitter pill to swallow and damages all the genuine good that has been accomplished.