Iron Front: Liberation 1944 is a hardcore military sim set in the eastern front of World War II. It’s created from the Arma II engine, so fans of that series should feel right at home.

When talking about WWII shooters, it’s easy to think of games like Red Orchestra or the Call of Duty series, but Iron Front shouldn’t be grouped together with those sorts of action-based games.

Iron Front is a slow-paced tactics simulation. Anyone looking for a run-and-gun game where they can brag about their kill/death ratio can just move on. If you are the type of person who enjoys spending half an hour moving a tank into position, then pull up a chair and stay awhile. 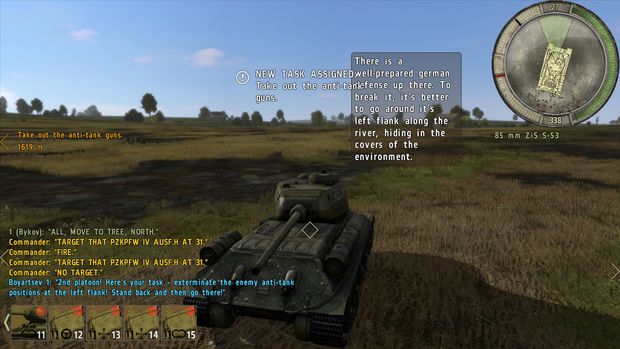 Iron Front is a detailed World War II sandbox. There are two single-player campaigns, a couple of interesting standalone missions, a multiplayer mode which can be played competitively or cooperatively, and a map editor that allows players to make their own missions. There are tons of accurate guns, realistic tanks and vehicles, airplanes, and a giant map of Poland to run around in.

While the single-player campaign is a must if you want to learn how play the game, it’s definitely more involved than a tutorial. There’s a campaign for the German side and one for the Russian side, and both are interesting and worth playing. Each campaign is available in English or the original languages. I liked hearing them in German and Russian because of the authentic flavor that adds; besides, the English voice actors aren’t very good anyway. The English dialog doesn’t always match the subtitles, either, and at times it can seem like they were written by two different people. 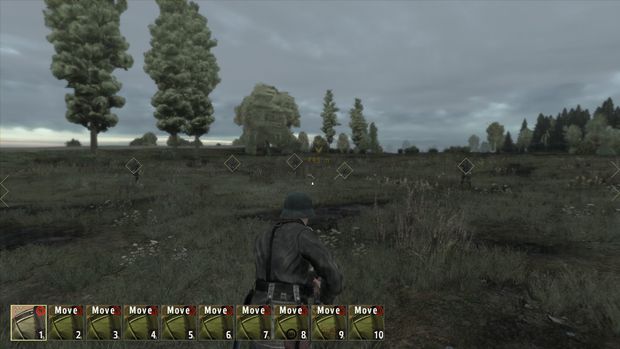 The story is not really an exciting narrative. It’s more of a possible string of events that serve as the basis for all of the missions that you play. Players take on the role of an everyday soldier who is just there to complete the mission.

It’s not worth writing a book about, or turning into a movie, but it’s believable and that’s important in a strategy game. Designers can come up with the most realistic mechanics, but if they ask me to kill the entire Russian army with a spoon to save a damsel in distress, it won’t really feel like a sim anymore.

Each single-player campaign takes about 6-10 hours to finish. The player is given a series of goals to complete on the game’s giant map, and they can be taken on any way you want. If the goal is to hold a point, it can be done by telling another squad of men to go do it while you sit and watch, or you can run at the enemy with a rifle and kill them all by yourself. So long as the goal is met, the game moves on. Because of how open each mission is, there’s a lot of potential for replayability. Once you’ve finished a mission, you can revisit it at any time from the main menu. 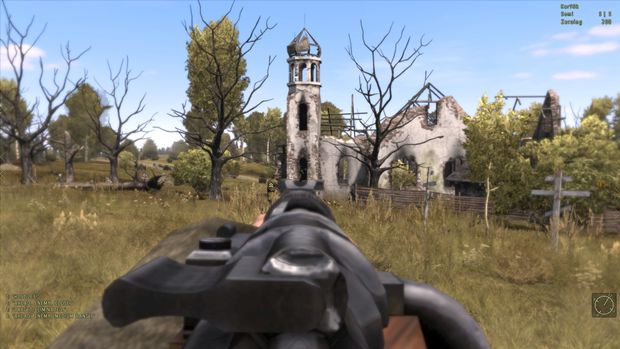 The gameplay in the campaigns ranges from being alone behind enemy lines, squad combat where you can order around your men, tank battles, and dog fighting in airplanes.

The squad controls are decent, but a little clunky. Individual men can be selected by using the F keys, or you can order around the entire squad by using the “`” key. Once selected, holding “v” brings up a circular crosshair and a context-related menu. Depending on what you’re looking at, your squad can be directed to move to a location, attack an enemy, get into a vehicle, or hold fire.

Sometimes there are a couple of layers of sub-menus that have to be navigated in order to get to the command you want, but you do have an insane amount of control of your squad. Squadmates don’t merely stand around and wait for your orders, however — they are using the same AI as the enemies in the game, and they’ll get down when under fire, run away from tanks, take cover, and shoot back at hostiles. 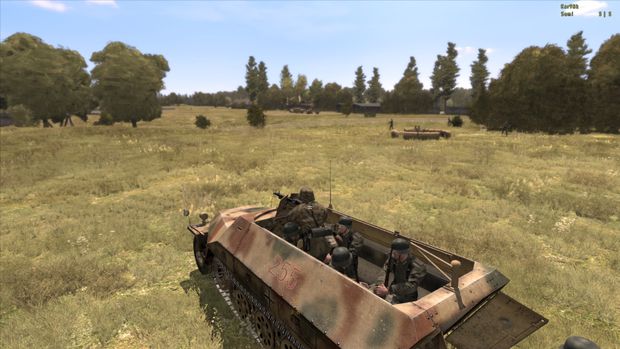 Controlling a tank is similar to controlling infantry. In fact, you can even tell your squad to jump into an empty tank if you’d like. Tanks have positions for a gunner, a machine gunner, a driver, a gun reloader, and a commander. Players can take any of these positions, but if you have a full crew, it’s best to play as the commander.

You can tell the tank where to go, the gunner what to target, and both when to open fire. It’s even possible to command more than one tank, and there are a couple of missions where you have tanks and infantry to control. This changes up the dynamics and makes Iron Front feel like an RTS game more than a straight shooter.

This actually has some good situations that were challenging and, more importantly, interesting. One of my favorite missions takes place behind enemy lines; your commanding officer dies, and you have to take charge of your squad to get them all out alive. While a simple goal, it’s one that can be identified with and understood. 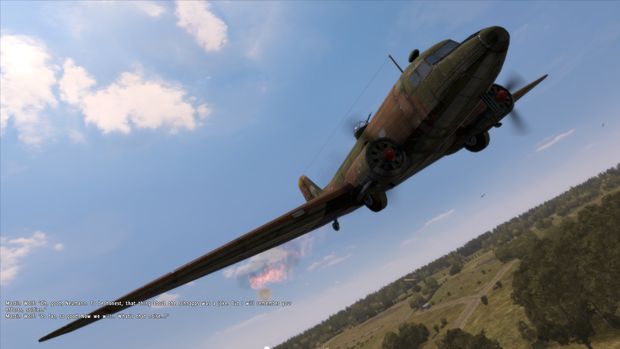 The multiplayer is also well done. There are maps ranging from small team deathmatches that can be played in ten minutes, to giant games of capture the flag that can take hours to complete.

In most of the matches I played, players were allowed to buy their own troops, vehicles, and weapons. Points can be earned by killing the enemy or completing goals. This means that a single player can control a tank without having to rely on others to move around and shoot. Not that you can’t drive a tank around with your friends, but it is nice to be able to have the choice. The player cap is huge; the biggest matches can easily have 100+ players in them. Now think about how each of those players can have a squad of five men under them, and you have a really freaking huge battle going on.

Tanks move down the roads, jeeps full of men try and cut across the forest, the skies are filled with bombers and fighters dogfighting, and infantry will fill up the buildings in a town. All of that is controlled by players. No matter what it is you want to focus on individually, you can probably do it and help contribute to the match. It’s awesome.

Speaking of infantry standing in buildings, most of the structures are fully modeled on the inside with opening doors and windows that you can shoot out of. So not only is the map huge and expansive, it’s also detailed. There is nothing better than moving a squad of men to the second floor of a barn and shooting men passing on the road outside. 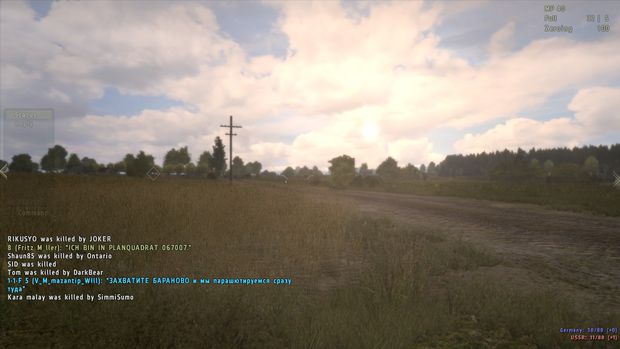 The map editor is essentially the same as the one in Arma II. You can drop down units and set up objectives and the game takes care of the rest of the details. If you think it would be fun to lead a squad of men on a rescue mission behind enemy lines, you can make that happen. And once it’s made, you can play it with your friends, or share it online.

While you can make all of the missions you want, you can’t make mods. Mods can only work with the game if they are approved by the developer and released as DLC. While that is unfortunate, it does make sense for a realistic sim like this. They don’t want people messing with the balance or running around WWII Poland on a unicorn. I would kill to get DayZ ported to this, and it is something that could happen.

While Iron Front is detailed and ambitious, it is also very buggy. I had issues with objectives being completed correctly, forcing me to replay missions. Sometimes troops don’t quite do what they are told and they die because of it. If an AI teammate is standing behind you and opens fire on an enemy unit, there is a good chance he’ll shoot you in the back of the head.

Doors can be difficult to walk through, climbing over things doesn’t always work, and there are a myriad of other little bugs that can be terribly annoying. I didn’t experience anything game-breaking, but I have read about some people having serious issues getting the game to work. My advice is to get the demo for Arma II and seeing how well your computer can run that before you drop any money on Iron Front. 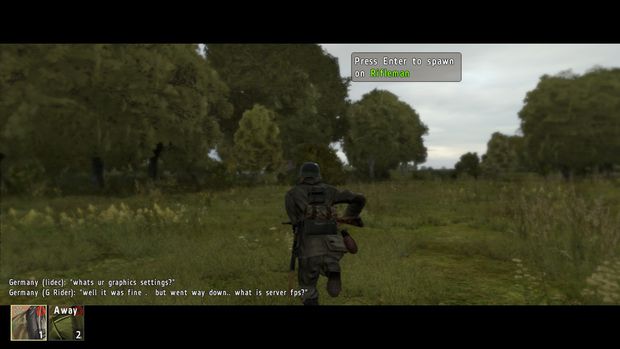 Arma II is a modifiable game, and there are already some good WWII mods for it that are free. You might be wondering “Why would I spend thirty bucks for something that I can play for free?” Well, that’s a valid question. My answer to you is that Iron Front is worth it — if you love WWII.

The models and units are detailed and the physics are tweaked to match the weapons and vehicles of that era. It’s much more detailed than any of the mods available for Arma II. If you don’t care for bolt-action rifles and flying around in a Stuka, then you won’t care too much for it. If you want to try and experience what it might have been like on the front lines in Poland, you should get Iron Front.

My final thought that I want to stress is that this is not a fast-paced action game. I cringe when I look at the Steam forum page for Iron Front and I see people complaining about how unbalanced multiplayer is and how the game is broken because they can’t get a good K/D ratio. This is not that type of game.

Iron Front isn’t about winning or seeing who is better, it’s about trying to recreate the WWII experience and it does a pretty decent job of accomplishing this. Despite being rather clunky and buggy, I have to recommend the game. It’s enjoyable, easy to create custom missions, and it’s fun to see how battles play out. If you’re a WWII buff, or a lover of simulations, then you need to grab this one.