For those of you who aren’t aware, Hot Wheels are a line of rail-launched ballistic weapons. Typically, they’re employed against cats, but they are also effective on younger siblings and antique furniture.

Historically, games based on these die-cast death dealers have been middling at best and terrible almost always. Micro Machines have been more consistent in their video game deliveries, but that makes sense since they were the better product. I won’t accept diverging opinions.

Hot Wheels Unleashed is Milestone’s attempt at doing the license justice, which is a bit worrying, because they’re best known for middling racing games. So, at the very least, we can expect something in the upper tier of Hot Wheels games. 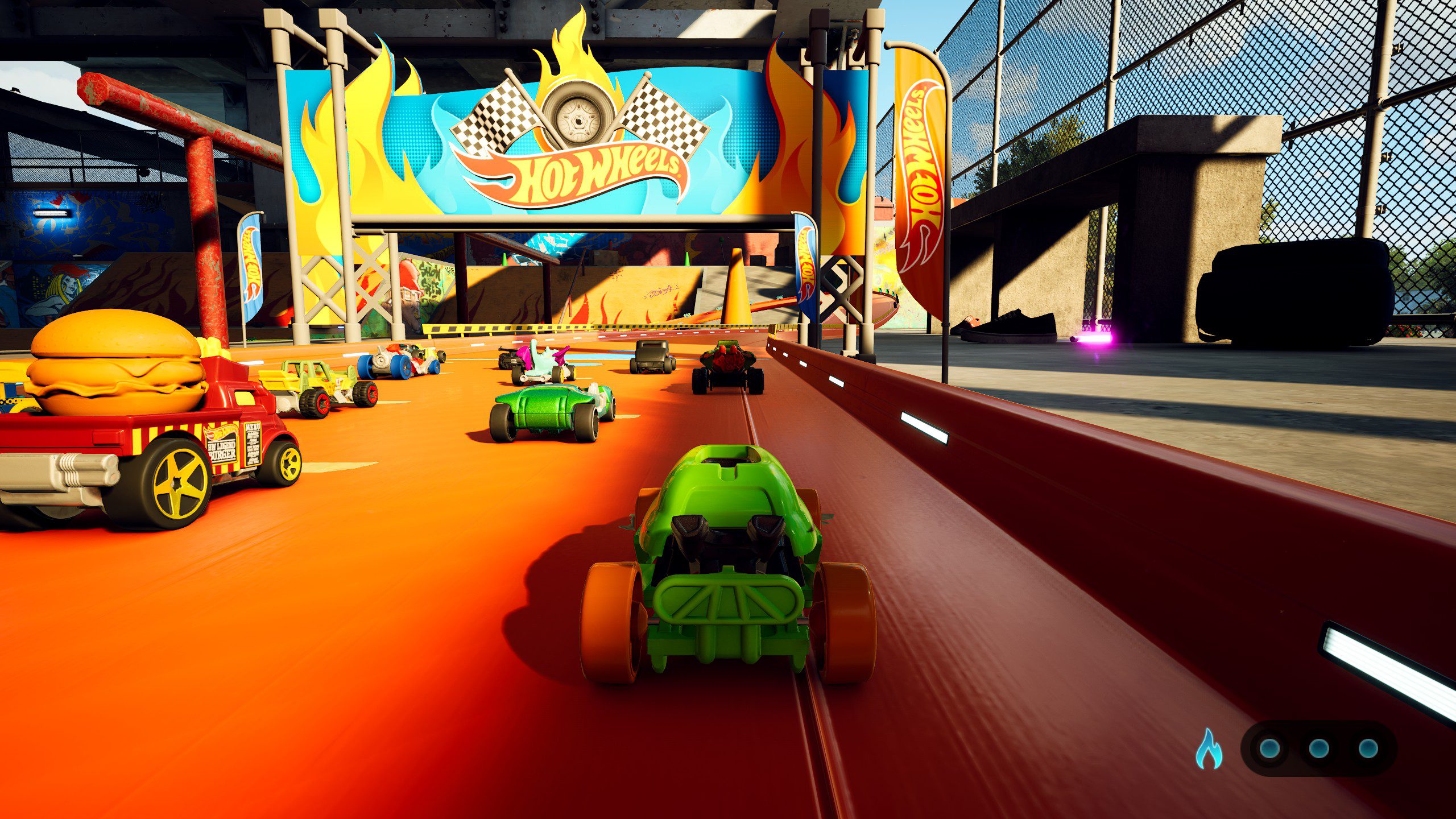 After a few races of Hot Wheels Unleashed, I had a couple of persistent worries. First, you unlock cars primarily through opening blind boxes bought with in-game currency, “Gears”. Immediately, that gave me the suspicion that we’d be buying coins with real money for the chance to be repeatedly disappointed.

The second concern I had was that I was going to be looking at a lot of orange plastic track. Sure, that orange plastic could be twisted into all kinds of configurations, but the fear was that it was always going to blur together.

While my first doubt hasn’t been completely quashed — there’s no way to buy currency right now, but that doesn’t mean there won’t be one day — my second fear went away at about the time I saw tracks tying themselves into knots like roller coasters designed by sadists. 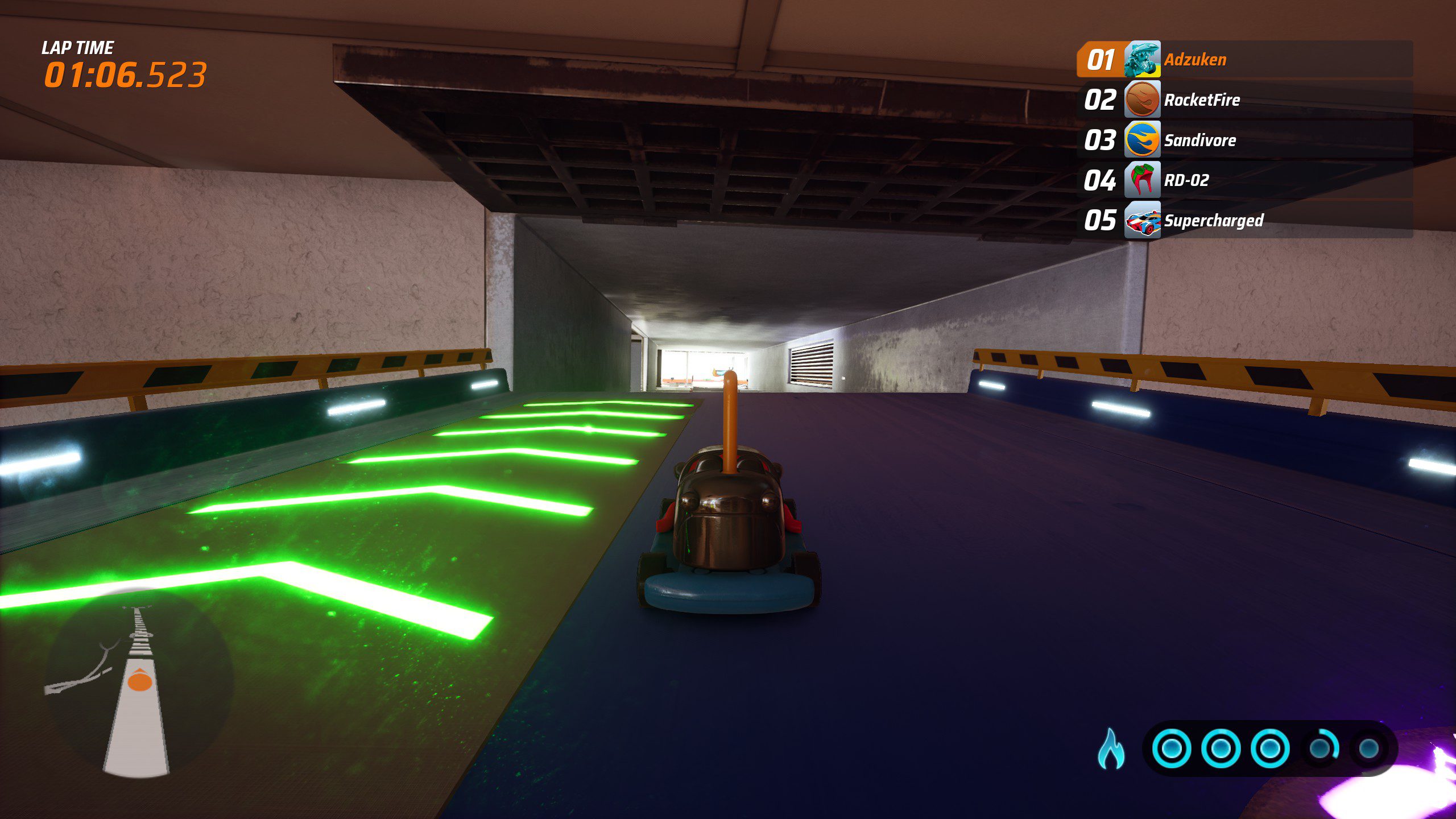 The amount of content in Hot Wheels Unleashed is simply staggering, enabled by some smart design decisions. There are 66 cars ready to be unlocked. They’re separated into four categories based on rarity. There are a mere five attributes making each one unique, which isn’t a lot. You can also spend Gears to upgrade common cars up to legendary status. Largely, this means there’s not a whole lot of tangible variation between vehicles; enough that you might have different cars for different occasions, but not so much that you can’t just drive the one that looks most appealing and still be successful.

The main campaign mode is Hot Wheels City Rumble, which follows the classic world map system to provide various challenges. The number of levels is dizzyingly high, which isn’t too strange for a racing game, but even if you just strip it down to the number of tracks, there’s about 40 of varying difficulty. This is no doubt helped simply because it’s all built in a track editor. 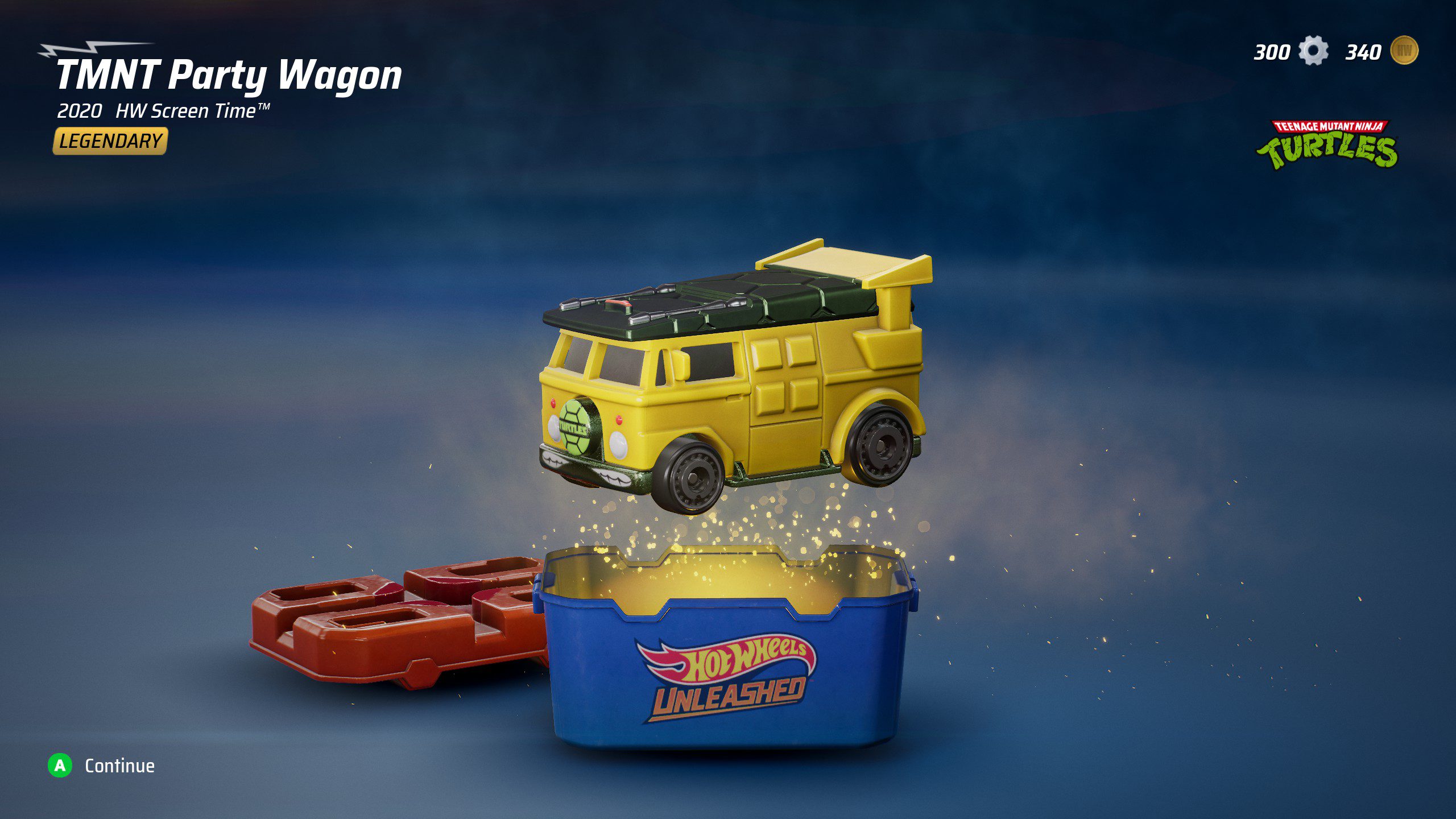 Don’t think the game is going to be easy because it’s based on a line of toys. I’m pretty sure the Hot Wheels target market is split between kids and adult collectors these days, anyway. Tracks start getting pretty complicated in the later game, and while you can change the AI difficulty, that’s not going to help you on the time trials. It starts becoming a game of precision driving and track memorization. There are bumps that, if you hit them too fast, will send you off course, or curves that if you take too loosely will knock you over. It can take a few attempts to clear a mission, as mistakes happen.

There’s also rubber-band AI, and while I could write an essay on how much I hate this method of adaptive difficulty, this isn’t the place. While I generally found it to not be terribly disruptive, the fact that a single mistake late in a track after a perfect performance can lose you the race is always annoying. It also makes the first two laps feel cheap. I thought it was hilarious when I found an exploitable shortcut on one track, which caused such an advantage that the other drivers had to catch up at ludicrous speed. Evidently, there isn’t a cap on how quickly your rival is supposed to catch up to you. 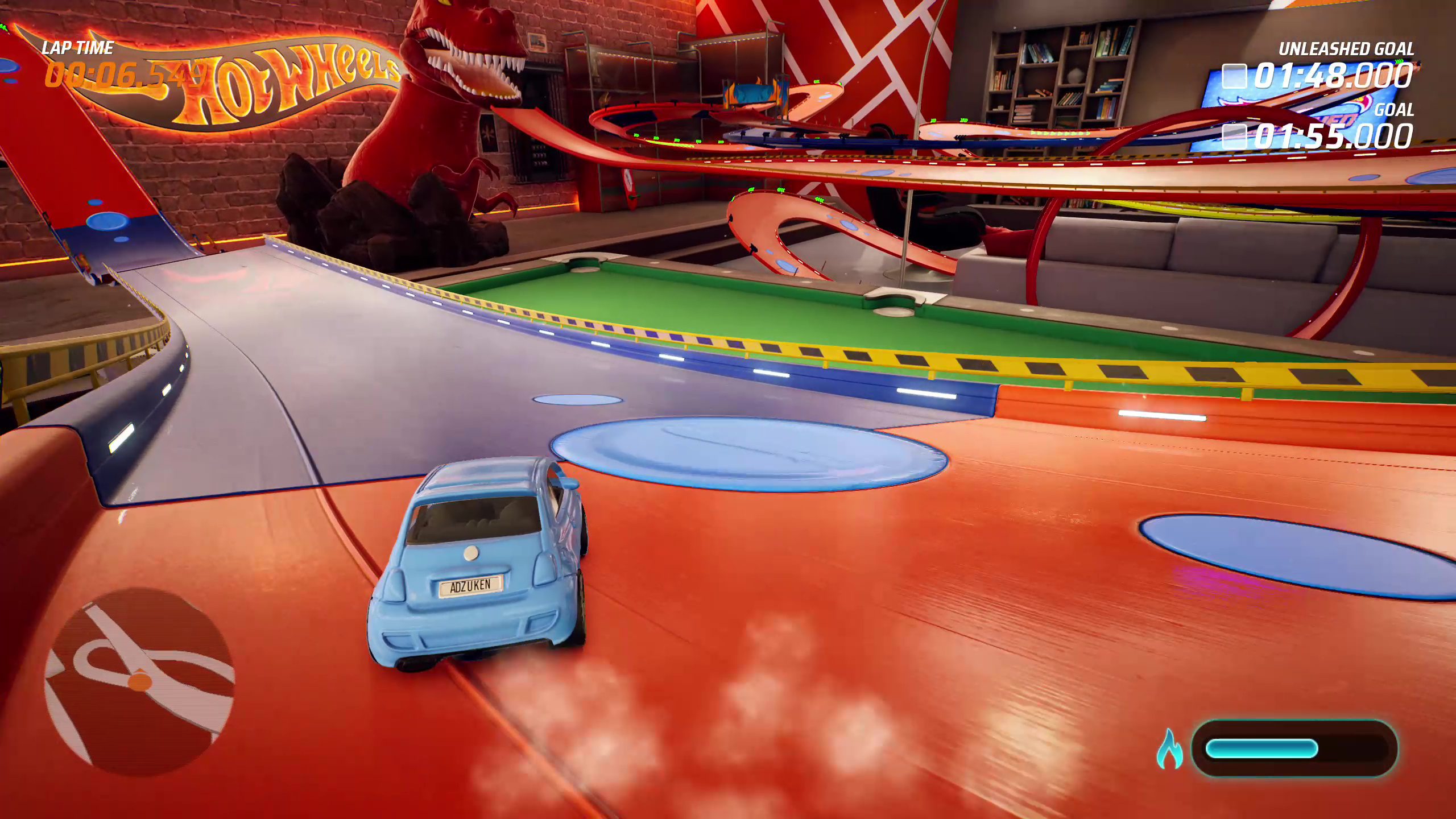 The amount of detail in Hot Wheels Unleashed is pretty phenomenal. The environments were all set up in ways that the tracks can make use of their nooks and crannies. Some make you go through vents or drift around a couch. One of my favorites has you drive across a narrow strut that only has enough room for single file traffic.

It also incorporates playsets for additional obstacles. The spider playset can piss right off into orbit, especially on time trials. The volcano is the most stressful, however, as it requires careful navigation up a corkscrew. Otherwise, you might find yourself at the bottom again.

There’s a lot of white knuckle moments on offer, and while some of them come from the fact that, by design, you will always, always have another driver glued to your tail, a lot of it is just from how insanely the tracks are designed. On your first time around a track, there’s an awful lot there to surprise you. 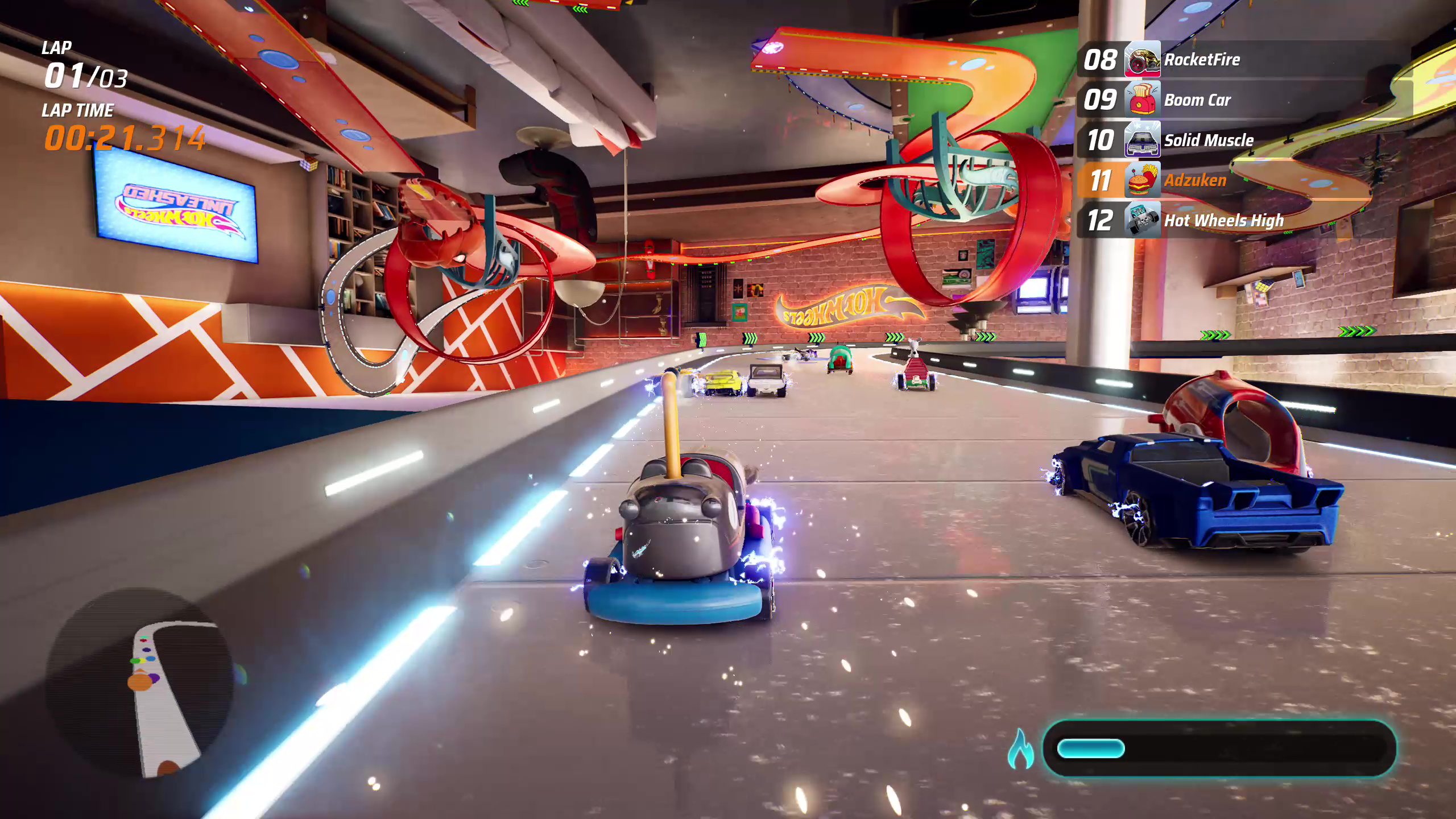 Honestly, most of the problems I had with Hot Wheels Unleashed were my own fault. Hitting a lip too hard and flipping my car, slamming into a barrier, boosting too hard and flying off the gravity tracks; I cussed a few times. The driving itself is surprisingly solid, with physics that don’t feel too outlandish. The worst feeling is when you miss a jump, hit the return to track button, and get placed way back at the start of the jump. That doesn’t always feel fair.

If you think you can do better than the developer, the track editor is reasonably robust and intuitive. I didn’t dig into it too far, because if I felt like I could design worthwhile tracks, I’d be creating games instead of just criticizing them from a safe distance. The ability to download other people’s tracks and custom liveries is appreciated, however. It will definitely help extend the game’s already considerable content.

There’s also the ability to customize the basement environment that you can build tracks in, which is very arbitrary to me. My best guess is that the developer just wants to remind me that there are basements magnitudes nicer than my apartment. 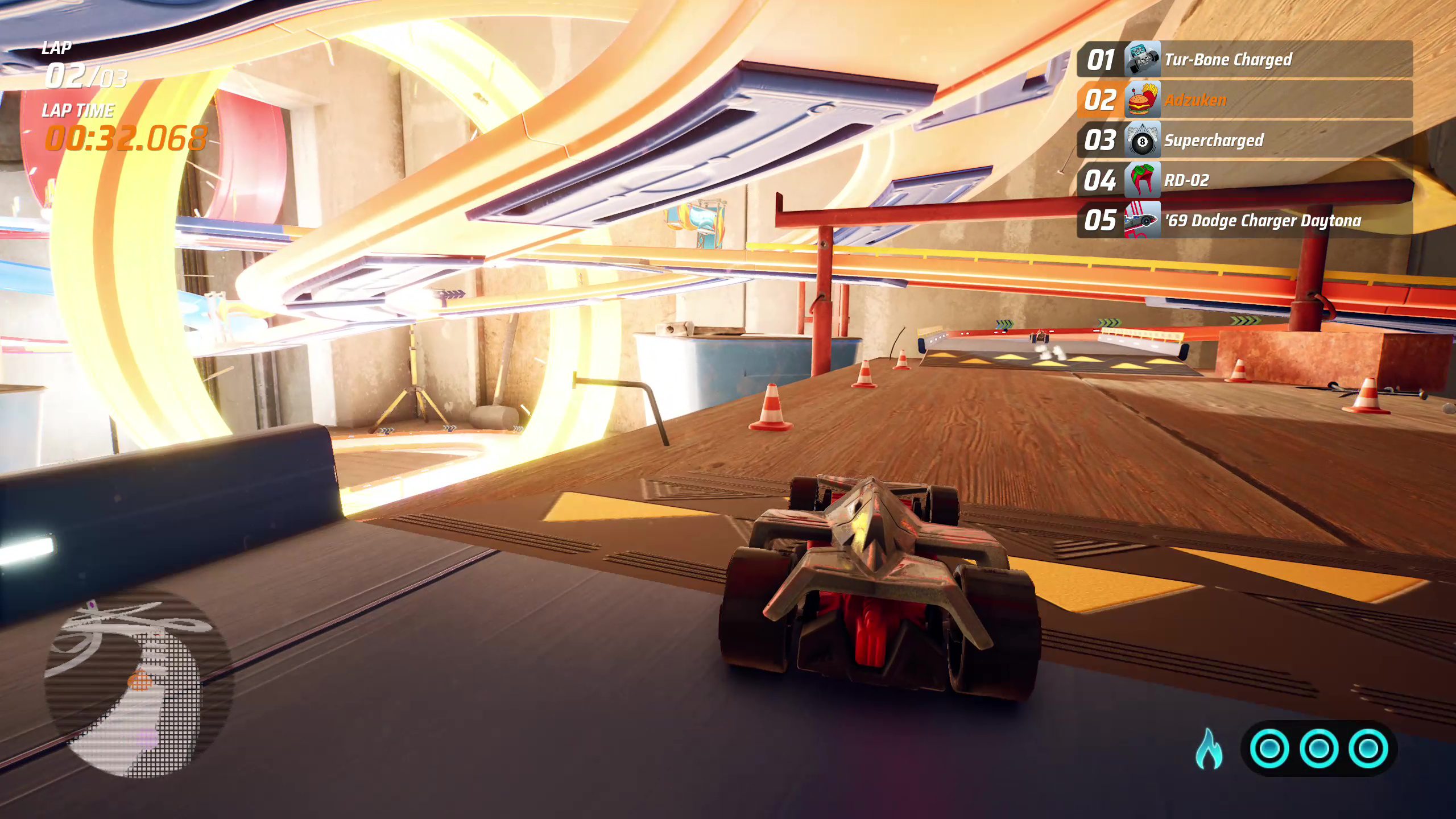 I could gripe about how I never got the Batmobile in a blind box, but I actually found myself pretty enamored by Hot Wheels Unleashed. It takes a lot to get me to actually complete a racing game’s career mode, but somehow it carried me past the 20-hour mark and to the credits. Then I dove back in for more, but I probably won’t get all the Unleashed objectives, because those spider playsets can kiss my butt.

Hot Wheels Unleashed impressed me on basically every marker. It looks terrific, it feels great, and the track design is extremely well done. I kind of hate the blind box approach of unlocking cars, but that’s a small complaint when getting my wheels on the track is always a delight.