This horn has no point

Phosphor Games knocked it out of the park with The Dark Meadow, providing a genuinely enthralling mobile game that had an interesting story and one Hell of a primary antagonist. Nevertheless, the Unreal-powered combat crawler still stood a little in the shadow of Infinity Blade, featuring a similar style of progression and screen-swiping swordplay.

The studio’s latest mobile adventure, Horn, attempts to spice things up by injecting more console-based influences into the proceedings. However, while the desire to make a more varied and less linear mobile game is admirable, the execution leaves a lot to be desired.

Horn is a game made all the worse for trying to do things better. The trouble is, it could’ve been brilliant had it just stopped worrying about its platform and concentrated on being fun. 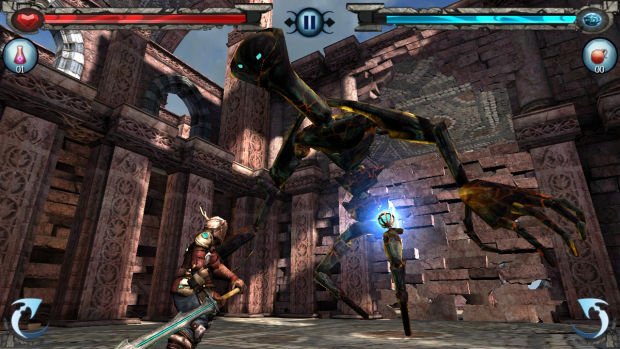 As it did with Dark Meadow, Phosphor has performed an excellent job of making a mobile title with a real narrative and memorable characters. The primary antagonist of Horn and the beheaded enemy he carries around his belt provide endearing banter, as players sympathize both with the hero and his opponents, the Pygon — stone creatures that used to be living creatures but have been made to enjoy their new immortal, soulless state.

With humor and solid storytelling, Horn continues to demonstrate that iOS/Android games needn’t just be physics puzzles and thoughtless distractions. It’s not the most amazing tale ever weaved, but it’s a huge step up from almost any other mobile game, and even manages to be more engaging than a lot of big-budget console narratives these days. If anything, the body-less Gourd and his constant attempts to convince Horn to kill himself or abandon the journey are worth the ride.

Horn navigates the world in a manner similar to traditional point-and-click adventure games. You simply tap anywhere on the ground to have the protagonist run to that location. Levers, collectibles, and other objects can be interacted with by directly touching them, while a separate virtual button is used to arm Horn’s crossbow. In crossbow mode, the player simply drags a finger to aim and then pulls back on the bow itself to fire.

The bow can act as a grappling hook, pulling Horn to higher ground or across chasms. Additionally, Horn also has a … horn … that he can blow at specific locations after learning songs. These songs enable him to turn back time to change environments, demolish buildings, or summon creatures that build new paths.

If all this is sounding suspiciously similar to The Legend of Zelda, that’s because it is. Phosphor has not been shy about its influences, the similarities to Nintendo’s action-adventure series being deliberate and guiltlessly unmasked. Even the combat has been purposefully likened to Zelda‘s — Horn attacks Pygon opponents with circular dodges based on the famous “Z-Targeting” established in Ocarina of Time.

At various points in the adventure, Horn will encounter Pygon blocking his way and enter combat mode. Combat, for all its visual uniqueness, is still very similar to the Infinity Blade/Dark Meadow concept, as Horn rolls around enemies, waits for a weakness in their attack, and then hits back using a range of finger-swipes. The main difference is that each Pygon has a specific weak spot somewhere on its body, and by rolling to the front, back, or sides of a creature, Horn can locate it for a damage bonus. At times, the Pygon will also launch a large attack, which is countered by pressing a QTE-style button. 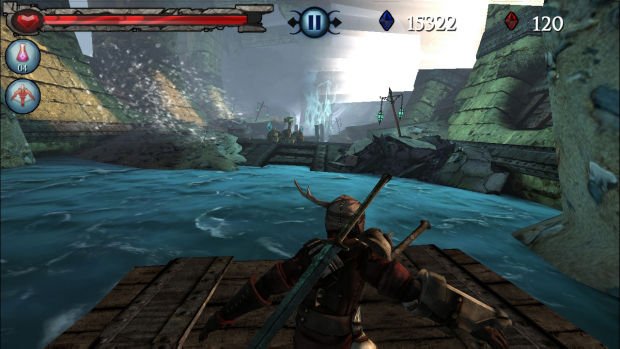 Horn has all the makings of a great game. Not highly original, but possessed of undoubted quality when compared to competing titles. It looks pretty, it’s fully voiced, and there’s a lot of ambition at play. Unfortunately, it seems that Phosphor’s preoccupation with making Horn better than the average iOS games has seen it run headlong into familiar mobile gaming problems with greater impact than its peers.

First of all, touching the ground in a fully 3D world is about as clumsy as you might expect. Between Horn not responding to input, getting stuck on corners, and running further along a path than intended, controlling the hero feels crude and awkward. I regularly found myself intently prodding my iPad’s screen until Horn got his arse in gear, and there are even moments where objects can’t be interacted with because the camera is placed in such a position that the interface stops working for no good reason.

While I commend Phosphor for wanting a game with a greater sense of freedom, the simple fact is that Horn would be a much better game if it were on rails. I’d even have taken a virtual thumbstick over the solution found here, or happily done without navigation altogether and focused entirely on combat. 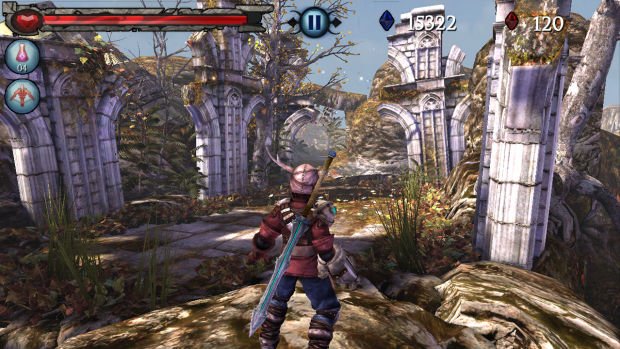 Compounding the control issue is the fact that there’s simply no tangible point to exploration. Sure, there are gems scattered around the map that can be spent on upgrades and new gear, but outside of that, it feels like little more than a waste of time. The “puzzles” blocking Horn’s way aren’t puzzles at all. Whenever there’s a problem to be solved, you’re instantly shown the solution. Bricks blocking a path? Just walk to the big trumpet and watch Horn instantly play the brick-smashing song. Impassable chasm? Hit the machine that makes an automatic zipwire and cross it. Essentially, Horn solves its own puzzles in advance, and you’re left with the humdrum task of doing the legwork. There are even icons on the floor telling you exactly where to stand to perform the next part of each “challenge.”

Things pick up considerably with combat, which is mostly enjoyable in the same way Dark Meadow was. It’s satisfying to learn an enemy’s patterns, escape their blows, and smash them to pieces, though the enemy attacks can be so varied that it’s often hard to work out a pattern before it’s never seen again. Upgrading weapons could be a compelling reason to keep playing, though that’s undermined by how expensive it is to do so — a problem I feel is inspired by the option to purchase additional in-game currency for real money. 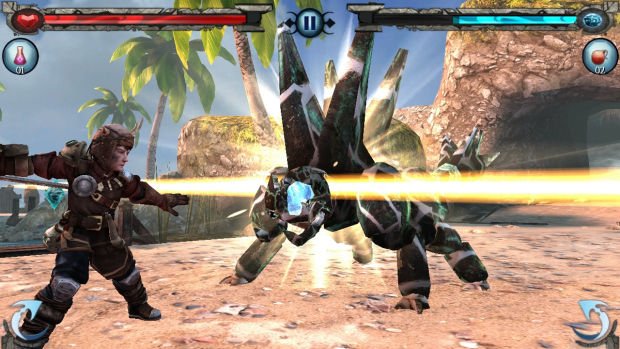 It’s upsetting that Horn constantly lets itself down because it has the heart of a fantastic game. Even with the game’s interface problems and the fact that, deep down, it’s just another Infinity Blade, Horn still manages to be intensely likable. Between the solid combat, interesting enemies, and affable characters, Horn has plenty of positives going for it, and I’d even go so far as to say that it’s still worth playing for iOS/Android gamers in need of a deeper experience. Still, any recommendation comes with a litany of caveats and an acceptance that, for all the good Horn does, it makes a lot of pretty disappointing mistakes.

After all the good Phosphor did with Dark Meadow, it’s sad that Horn will likely be used by detractors as proof that mobile gaming just doesn’t work. It does. It’s just that Phosphor went too far trying to prove it this time, and Horn is a worse game because of it.