Time to save the world… again

Half-Minute Hero was arguably one of the PlayStation Portable’s best games. As a deconstruction of the role-playing genre, it poked fun at its peers by condensing the core experience of an 80+ hour epic down to just thirty seconds of gameplay. Then with heaps of self-referential humor, it proceeded to roast the genre. Dragging just about every trope out of the book, the game does an admirable job at enticing players to reexamine the venerable (if stagnant) genre, warts and all.

Having been re-released once prior on XBLA, Half-Minute Hero has now made its way to PC with a bundle of new content for players familiar with either version of the game. 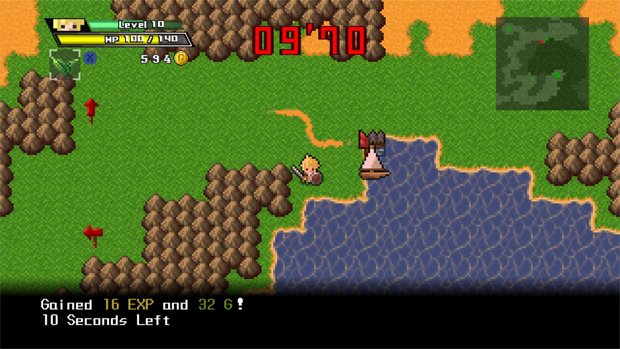 Half Minute Hero: Super Mega Neo Climax Ultimate Boy is a strange game and not just because of the bizarre concept or that grotesquely long title. It’s not really an entity unto itself, but rather an amalgamation of the previous releases. Both the PSP and XBLA versions featured exclusive content and Marvelous AQL has combined the two to bring what would appear to be the definitive version to PC gamers.

Half-Minute Hero takes everything you’d find in a classic role-playing game and boils the experience down to (you guessed it) thirty seconds. Every level begins with a Dark Lord casting a spell of destruction that will destroy the world if he isn’t defeated before the clock strikes zero. That gives you, the Hero, just half a minute to grind, acquire loot, perform sidequests and defeat the big bad. It sounds impossible — and it is, sort of.

Early on in the Hero’s journey, he meets a Time Goddess who offers to turn back the clock, for a price. Each payment sets the countdown to destruction back to 30 seconds, giving the Hero enough time to level-up and save the world. “Praying” to the Goddess cannot be done indefinitely, however; as payments quickly become more and more expensive, eventually to the point where it’s unsustainable to keep up.

Fortunately, running out of time is rarely an issue, at least in that regard. The real trick is beating levels as quickly as possible to achieve higher ranks. Aside from racing against the clock, challenge is gradually introduced via puzzles and optional objectives. These become progressively more difficult (sometimes obtusely so) and help keep what’s otherwise a somewhat monotonous game fresh over its duration.

Also keeping things breezy are a pair of supplemental campaigns that didn’t see the light of day on Xbox 360, but were present in the PSP original. Despite not offering nearly as much content as the main game, the “Princess 30” shoot-’em-up and “Evil Lord 30” RTS add variety to a package that really lacks it. Despite its brevity, “Princess 30” is easily my favorite aspect of the game. The unique perspective of the protagonists and humor that arises from the damsel and antihero storylines really sell it for me.

The PC release, like the 360 version, features a four-player online multiplayer mode that pits players against one another in a race to defeat Dark Lords across ten levels. Unfortunately, what little enjoyment that can be derived from this addition is pretty fleeting, as it’s essentially the same as the main campaign and interaction between players is extremely minimal. It’s a nice throwaway diversion for a few minutes, but it’s shallow and grows tiresome quickly. 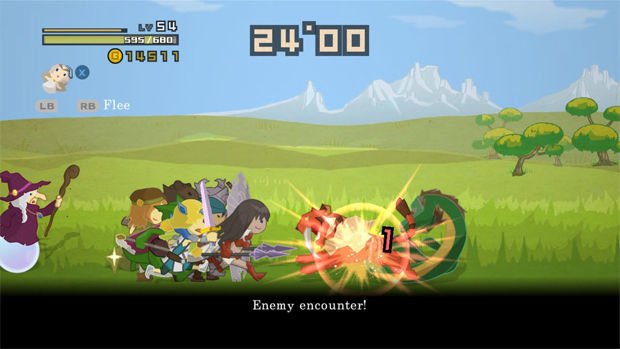 Ultimate Boy sports both the exaggerated pixel art of the original game and the atrocious-looking hand-drawn visuals Marvelous AQL cooked up for the 360 version. Unfortunately, but unsurprisingly, the wrong one is set to default and needs to be changed every time the program is launched. It’s not a major gripe or anything since the option is there and it’s entirely subjective, but I really have to wonder who thought that style looked better than that of the original.

The only other black mark to mar an otherwise enjoyable experience comes in the form of bugs. In the several hours I spent with the game, I experienced well over a dozen crashes and some rather peculiar texture issues that caused the game’s visuals to disappear almost altogether.

For example, here is what the world map should look like. Again I’m not too big of a fan of that goofy new art-style but, hey, it’s preferable to this. And while my issues were generally confined to the world map, on occasion, the overworld got in on the action as well. Fortunately, the game autosaves frequently enough that afflicted players shouldn’t lose more than a few minutes of progress at a time.

Regardless of whatever technical and aesthetic issues there may be, Half-Minute Hero is still a fantastic and unique game worth experiencing if you haven’t had the chance already. For those looking to take it for a second spin, however, just be warned that there’s not a whole lot of worthwhile content to pull you in unless you missed out on the modes omitted from the Xbox 360 release.