Where are my Gunvolt fans at? It’s crazy to think that this series has been in the mix for nearly eight years now. It’s been a whopping 30 years since the original Mega Man X was released, and so many games have attempted to fill the void: even within Capcom’s own wheelhouse. After playing Gunvolt Chronicles: Luminous Avenger iX 2, I still feel the same way about Gunvolt: I want this series to live on forever.

Inti Creates has had a crack at a number of different characters in this universe, and although Copen (the star of the spinoff Luminous Avenger) is back, everything is different. The creators take a really cool approach here, and set everything in an alternate universe. Copen is enjoying a relaxing break at home and then BAM: we’re suddenly sucked into a different dimension, and we’re two months into his explorations there.

It’s a framing device I’m a huge fan of, especially since it gets us into the 2D action immediately, and although it’s a spinoff of what some would call an obscure series, it’s an easy ask for someone to dive into an alternate timeline and not feel like they missed much. It’s animated, too — and I mean that literally and figuratively. While I’m sure some will find it annoying, having your AI constantly cheer you on with a fully voiced performance is smart, and injects a lot of personality into an otherwise stoic Copen.

Even the footstep noises on different types of ground are accounted for with stellar sound design, and some of the music tracks would be welcome in a proper Mega Man game. While stories in 2D games are often pageantry or set dressing, everything comes together here to showcase a lot of personality and draw you in: even if it’s for a moment.

Copen has some tricks to go along with the new framework. One immediate comparison I thought of when I was thrust into the desert region of Luminous Avenger 2 was Mega Man Zero: right down to Copen’s starting melee focus. Once again Copen’s ferocity is represented in-game, particularly with the “impact dash,” which can be used in mid-air to bump into objects or enemies; then initiate a lock-on sequence where you can unload. As usual, this Gunvolt-franchise joint is streamlined, in a good way. You won’t spend copious amounts of time in menus or in tired RPG mechanics. There’s a few things you can upgrade, several abilities to swap between, and that’s it. Instead, I found myself focusing on actually playing the game, much like a classic Mega Man X series romp.

It’s always fascinating to see modern game design in what is ostensibly a retro enthusiast game, too. Luminous Avenger, similar to Shovel Knight, has a system in place that rewards veterans with skipping checkpoints (you keep a higher combo avoiding them), which of course means that death will set you back to the beginning of a stage. Self-imposed challenge systems that don’t inherently take away from the flow of the game, or require you to fiddle with menus, are very much welcome, if done right.

Likewise, you can avoid healing or using supers to rack up more score; and there’s a small amount of hidden objects (four per stage) to encourage exploration without getting overwhelming. “Balance” has always been one of Inti Creates’ strengths. They know how to cater to both long-term players and complete newcomers, and I think Gunvolt Chronicles: Luminous Avenger iX 2 will satisfy a large spectrum of people. 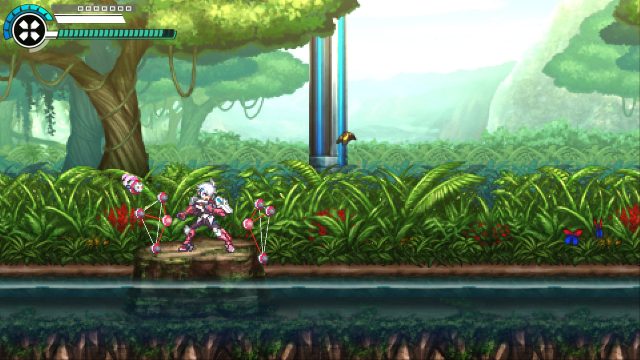 It was especially fun bouncing between both ideologies. On some levels I’d let all my special abilities rip, then on a repeat play, I’d try and tough things out. Given that Copen is capable of both (excess and lean mechanical use), everything flows no matter what your aim is.

Inti Creates can just keep making games throughout my lifetime. While a lot of studios are making retro-tinted projects, many of them don’t hold a candle to what the studio is doing right now. A lot of their works are slept on, but I wouldn’t be surprised to see a bunch of Gunvolt games end up on a lot of all-time platformer lists throughout the next decade. Now where’s my Mighty Gunvolt Burst sequel? I don’t care if Inti Creates has to buy the Mighty No. 9 name and do it right.